How does the size of the largest cryptocurrency compare to the largest traditional currency?

'Money' has evolved throughout economic history, and has included moving from:

That is, how does bitcoin compare to the US Dollar in terms of any/all of:

Sensible assumptions in measuring the above are welcome.

Note: I thought about also including comparison of the total number of accounts, bit I think that's useless since creating accounts in cryptocurrencies is so trivial that one person could create billions, making comparison fairly uninformative. I also thought about comparing the number of (human) users, but suspect that could be difficult since it's not possible to know how many human users there are for most of the large crypto currencies.

The Wall Street Journal ran a great article comparing cryptocurrency sizes. The article compared the asset classes by relative market capitalizations if you added everything up. 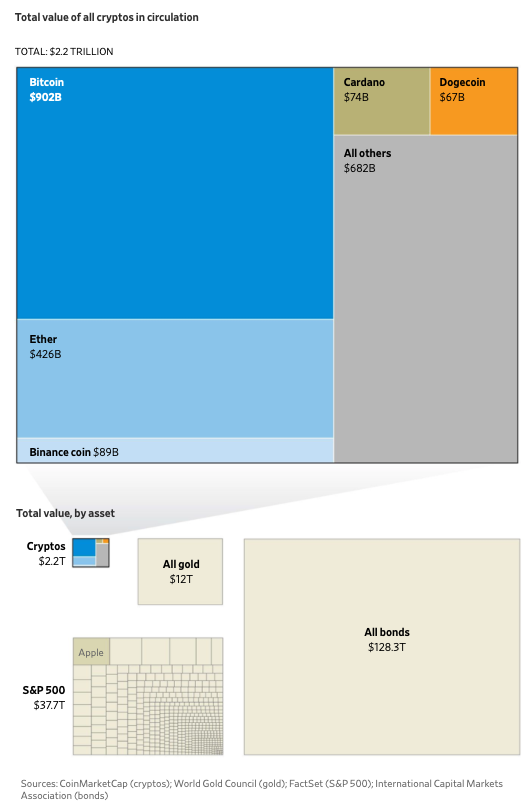 Not the answer you're looking for? Browse other questions tagged money history cryptocurrency economic-history or ask your own question.

9
Financial Smart Contract on Ethereum: can an Ether Futures contract be priced in Ether?
2
Is it valid to compare cryptocurrencies by using their smallest divisible unit?
1
What is a suitable exponential to model a currency or cryptocurrency price increase?
1
Can we stabilise the price of a cryptocurrency?
2
If a fluctuating cryptocurrency becomes the new world coin, would it stop fluctuating?
4
In which country does my money have the largest purchasing power?