Is there a way to characterize the distinction between simultaneous vs sequential games? I'm trying to describe a situation where players can only take actions without knowledge of other players' actions in a given stage of the game (i.e. where the actions taken in any stage of the game are simultaneous), but where repeated games are permitted. I've read Gibbons (1992) but am nowhere wiser.

From a theoretical standpoint, all that matters is what does a player "know" about the previously played moves while making a decision in a game. This notion of the "information that a player has before making a move" is characterized in sequential move games (and their game trees) via Information sets.

Consider, for example, prisoner's dilemma. But suppose that it is played sequentially, in two different ways: 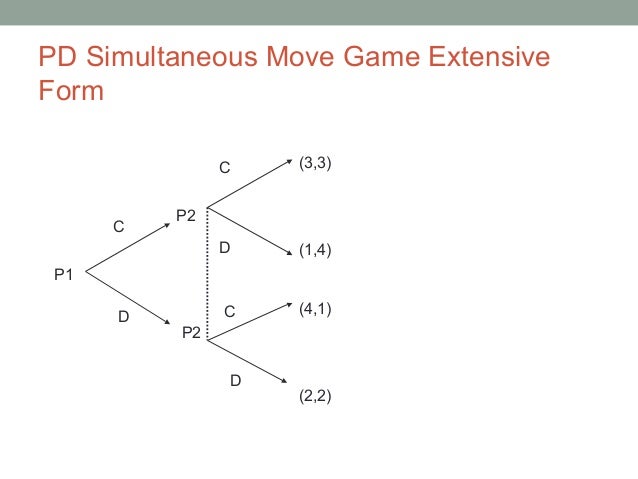 Here's how we conventionally represent a simultaneous move game in extensive form. In the above image, the dotted line joining the two decision nodes of Player 2 signify that while making her decision, Player 2 does not know at which node she actually is. If there were no dotted line, it would mean that Player 2 knows at which node she is, and hence has learned about Player 1's choice. In the pictured version, all that Player 2 knows that if she plays C, she would get either 3 or 1, but that's it. Note that this is exactly similar to the situation we have in a simultaneous move game. A repeated version of this one shot simultaneous move game is then easy to imagine.

In GT jargon, we say that these two nodes which are joined are contained in the same Information set. So, an Information set is the collection of nodes among which a player cannot differentiate.

Not the answer you're looking for? Browse other questions tagged game-theory bayesian-game dynamic-games repeated-games or ask your own question.

11
When should a receiver randomize across actions in a signaling game?
8
Extensions of Nash equilibria to games with infinite strategies
2
Terminology for "part" of extensive form game
2
How to visually present a simultaneous game with continuous strategies
3
Confusion about multiple information Sets
2
Two Players Different Strategies in infinitely repeated game
2
On the (rather strange) notion of strategies in repeated games
2
One shot deviation principle in games with many players