Does investing in the stock market contribute to economic growth?

I am morally opposed to economic growth: I think that for the good of our planet we need to be shrinking human impact in pretty much every way, not increasing it.

If I invest in the stock market, I am placing a bet that growth will continue for some time. I think this is a reasonable bet to place, despite my opposition to it.

However, does my investment actually contribute to economic growth? In particular, could anyone give an analysis of the likely impacts of either

Yes, investing into stock market has positive impact on growth. First, before going any further, investing into stocks is from an economic perspective just a form of saving. Consequently, following the literature this answer will be repeatedly referring to saving in general.

Effects of Savings Under Exogenous Growth

To illustrate the mechanisms at play consider augmented Mankiw-Weil-Romer (1992) Solow-Swan model given by:

Where $Y$ is economic output (change of which is economic growth), and economic output varies positively $K$ is stock of capital, $H$ is stock of human capital (i.e. education) $A$ is the stock of technology (assumed to be growing at an exogenously given rate $(A (t) = A (0)e^{gt})$ and $L$ the stock of labor (growing at exogenously given rate $(L(t) = L (0)e^{nt})$. The Greek letters are exogenously given parameters that depend on the nature of society's production function (with $\alpha +\beta <1$). Hence, when stock of capital, education, technology level or labor force expands economy will experience economic growth.

Now in order to see how savings plays a role in all this we can first define everything in terms of effective labor (e.g. $Y/AL= y$, $K/AL=k$ and $h/AL=h$), and using the fact that capital (and human capital as well) is determined by investment which is macroeconomically equivalent to saving we get that:

where $s_k$ is share of saving invested in physical capital and $s_h$ share of saving invested in education, whereas $\delta_k$ is depreciation of physical capital and $\delta_h$ erosion of human capital (e.g. loss skills over time). For simplicity it will be further assumed that $\delta_h = \delta_k=\delta$. Substituting the evolution of capital and human capital into the per capita version of (1) we get:

Now stock market is stereotypically associated with investments into physical capital so I will focus mainly on relationship between output and physical capital. Hence, let us set growth rate of technology, population and to simplify calculation also depreciation to zero and let us assume technology stock and saving rate for human capital are fixed so their time derivates are zero. We end up with expression:

$\frac{\dot{y}}{y} $ is just continuous version of growth rate and consequently we can see that output growth depends on growth in savings rate. Furthermore, since $\alpha + \beta<1$ the relationship will be strictly positive}. However, a caveat here is that saving rate cannot growth forever as it has to be between $0\leq s \leq1$ since it is a proportion of income not consumed, so any increase in saving rate will increase the growth rate but you can only increase your saving rate to the point you devote your whole income to it. Visually a simulation of an increase in savings rate would produce the following result (see Romer Advanced Macroeconomics pp 20 - please note the simulation is based on simplified version of an above model so the precise shape of those curves might be different but the point carries over): 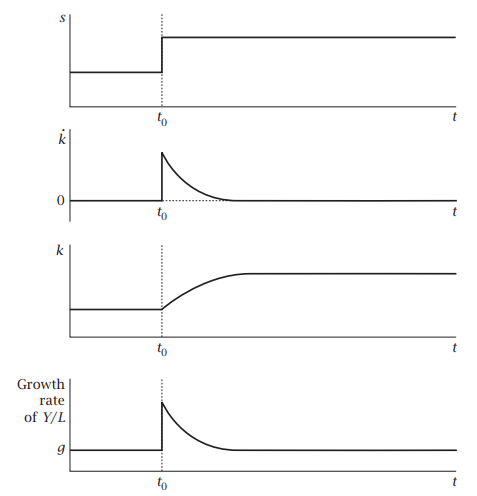 However, this being said higher level of saving will still increase level of output which will lead to temporarily higher growth just the effect won't be permanent and the only thing that can permanently increase the per capita growth rate in exogenous growth rate model is an increase in rate of technological progress.

Effects of Savings Under Endogenous Growth

In short, the gist of endogenous growth theory is that it rejects the exogenous growth theory assumption that technology develops at some exogenously given rate and society cannot do anything to speed up technological progress. Endogenous theory rejects that view and argues that investments in capital, education, or having larger labor force (and thus be able to devote more labor to R&D projects) can increase the rate at which technology accumulates and so $g$ will be also function of investments into capital, education and share of labor devoted to R&D (see discussion in Romer Advanced Macroeconomics Ch 3).

Now since you are interested primarily in saving via stock market the first relationship will be of greatest interest to you. Now endogenous growth literature argues that the link between growth and saving here is mediated by either learning by doing it (e.g. investing money into building a cargo ship allows firms to learn how to better produce cargo ships - see Arrow, 1962). Next there will be link because firms can use portion of that investment to finance R&D that then improves productivity of either capital or labor depending on what sort of production function industry has (e.g. see Romer 1990).

To sum it up, both major strands of economic literature shows saving whether through investment in stocks or in various other ways (putting your money in bank etc) has positive effect on economic growth. However, under exogenous growth theory this effect is just transitory whereas under endogenous growth theory there might be long lasting effect.

However, given that the economic literature on endogenous growth suggest that the link between saving and economic growth is mediated via investments in R&D and learning by doing, if you want to minimize economic growth of society you can do your research and invest exclusively into stocks of companies that devote as little of their budget to new research as possible. This won't avoid effect due to learning by doing but it would almost certainly result in lower long term economic growth than investing into stock of companies that invest heavily into research.

The answer of 1muflon1 gives a more macro explanation for why economists think that investing in stocks (or bonds) will lead to economic growth. Please allow me to provide a more micro-oriented perspective on the matter.

The basic principle that I will use is well-known to economists (but perhaps not so much to people outside of econ). It is the idea that free trade (in any form whatsoever) is beneficial to welfare and will, in many cases, also to economic growth. By "free", I mean that both parties agree to the trade (without any political connotation).

The idea is very simple and is probably easiest explained using a revealed preferences viewpoint. If two parties agree to a trade (e.g. selling a house) then they will benefit both. The fact that the buyer agrees to sell the house (at the particular price) means that the money she receives is worth more to her than the value of her house. Likewise, the fact that the buyer is willing buy the house means that he values the house above what he is paying for it. Economists talk about a Pareto improvement, which means that everybody gains and nobody loses. Here I ignore the fact that in some trades, third parties might be hurt (so called externalities), which is an entirely different discussion.

Let me go over the different ways that were proposed in the question.

If you choose to eliminate your debt, and you believe that this is the best thing to do with your money, then this probably means that any alternative use for your money is generating less return (e.g. you mortgage is at 4% while your savings account only gives you 2%). In this case, you are better of paying back your debt.

The money paid back to the bank can then be used by the bank to give new loans (or mortgages) to other people. These people are willing to pay the 4% on their new loan, maybe because they can invest this money themselves and obtain a return of 6%). So if the money that you repaid is be loaned to someone else, then this may well lead to a more efficient use of the funds and to more economic growth.

If you keep your money in your savings account, this means that you are happy with the interest that the bank pays you for this money (i.e. there is probably no better investment with a better return). With this money, the bank will give a loan to someone else. Of course this other person will only borrow this money if the loan can be used towards a more interesting investment than the interest she has to pay for it. So also here, putting your money on a saving account will lead to a more efficient use of your savings and can generate more economic growth.

Bonds are loans to firms. If the firm can use your money more productively than you can, there is a gain to economic growth.

Stocks are parts of the firm. If you buy a stock, then you basically become an owner of part of the firm. You can either buy stocks from the firm itself (IPO) or you can buy stocks from someone that already has the stock (e.g. on the stock market). In the first case, you basically buy a part of the firm directly from the firm. With this money, the firm can do its business and give you some return in terms of dividends. If you think the firm can use your money more efficiently than you can, there will be a gain to economic growth.

If you buy a stock from someone else, then you are trading a part of the firm. The seller will only do this if she thinks she can put the money to better use and you will only do this if you think that investing in the firm is more worthwhile than putting your money on a savings account. So again this leads to a more efficient allocation of funds.

I decides to put this last in myself, as this might (in my personal opinion) be the most obvious example that breaks the rule. Ideally, you should buy cryptocurrency for the same reason as you would buy Euro's, Dollars or Yen. You want to buy something, but the price of the item is in another currency. (here I'm abstracting from the entire blockchain technology that indeed might give some benefits over using other currencies)

In reality, however, most of the "investments" in cryptocurrency are done only because people expect these cryptocurrencies to gain even more "value" in the future. Most of these investments (if not all) are therefore speculation and, as such, worthless from a society point of view. Buying or selling cryptocurrencies therefore reallocates money between people but not in a way that leads towards more efficient use.

Not the answer you're looking for? Browse other questions tagged economic-growth stock-market or ask your own question.