Why doesn't national savings, in aggregate, always equal to zero in monetary terms?

Referring to this question and this one

I understand that if person 1 and person 2 both produced 10 bushels of wheat and then ate only 5 of them, and then ground up the other five and used them as fertilizer (bad example, I know) that they would have 'saved' and 'invested' 10 bushels of wheat in aggregate. However, in monetary terms, the personal savings rate in aggregate would still be zero because they didn't sell the wheat to anyone and thus had no personal income (again, in dollar/monetary terms).

So, to sum up, my first question is, in monetary terms, in a closed economy will aggregate savings always be zero?

Second, how does the BEA get a positive savings rate, and how do we have positive gross national savings, in addition to running a trade deficit?

I think this boils down to misunderstanding what saving in macroeconomics is. Saving does not cancel each other out. In closed economy, private saving is difference between income (which is by definition equivalent to output so I will be using output and income interchangeably) and consumption $S=Y-C$ and public saving is difference between government spending and taxes $T-G$. In your case there are only private individuals so let us assume there is no government so that $T=G=0$ and consequently national identity will be given just by $Y=C+I$ (also note this shows that investment and saving must be equivalent since $Y=C+I \implies Y-C=I \implies S=I$). See Blanchard et al Macroeconomics a European Perspective for further explanation of those identities.

To answer your first question: You are correct. Financial saving is always zero. Every new financial asset must have a corresponding financial liability.

This 117 page reference is an introduction to the outdated standard called 1993 System of National Accounts: 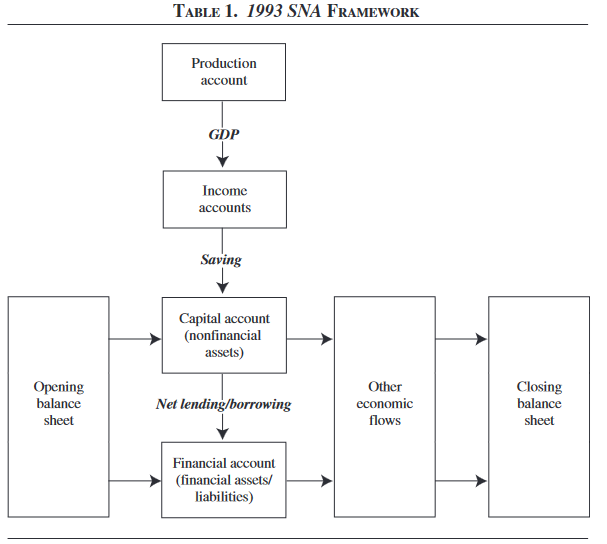 The Capital Account is supposed to accumulate the net increase of non-financial assets and this equals the difference between aggregate total income and consumption spending. There is a statistical error however when making efforts to measure investment in nonfinancial assets and measure income and consumption via flow transactions. Anyway this is the idea that saving income really means spending for investment in nonfinancial capital. This is a tautology or economic definition of "saving" "investment" and "consumption" in the system of national accounts (SNA).

The aggregate economy should have a financial identity which I approximate as follows:

where if the economy is closed domestic variety then financial assets F equal liabilities L and national net worth is given by N = K which is the valuation of nonfinancial assets, in monetary terms, stated in the opening and/or closing balance sheet.

The advocates of so-called Modern Monetary Theory (MMT) argue that a fiat Sovereign government that runs a persistent budget deficit provides net financial assets to the other domestic sectors. Bill Mitchell shows these financial assets accumulating in the non-government tin shed in an illustration on this blog page: http://bilbo.economicoutlook.net/blog/?p=381.

In the United States flow of funds the concept of the "balanced budget" shows up as follows:

where the federal government (sovereign) kept net worth roughly equal to zero in the Integrated Macroeconomic Accounts (SNA-IMA) prior to going off the gold standard in 1971. However since then the federal government has accumulated negative net worth shown in the official published statistics. This means the government can simply debit its net worth Ns for a decrease when issuing liabilities Ls which are in demand by the investors who store financial assets in the nongovernment tin shed.

The net worth of the United States is to some degree an accounting fiction because vast tracts of federal land are given no valuation and because financial assets and nonfinancial assets are recorded at historical cost. The world seems to be content, for the time-being, to allow the federal government of the United States to provide cash flow insurance to the world financial system independent of its stated net worth.

Not the answer you're looking for? Browse other questions tagged macroeconomics gdp saving balance-of-trade national-income or ask your own question.

2
Secular Stagnation: A Plain-English Explanation
11
Why does savings equal investment (scenario)?
6
Can savings and poverty coexist?
1
Is the BEA double counting benefits in Personal Income?
0
Does National Savings equal zero in a closed economy? Please give an economic intuition
1
Why doesn't Aggregate Demand mean National Income whereas Aggregate supply is equal to national income?
5
S=I in a closed economy
1
Would it even be possible for m2 to remain stable under positive interest rates?
1
The impact of finance in the basic macroeconomic model