Problem: Visualizing longitudinal is challenging when the dataset has large number of panel members. A common ways to visualize such data is to either make a large set of small individual plots such as the example below on the left from Frank 2009, or they resort to 'spaghetti graphs' such as the one on the right 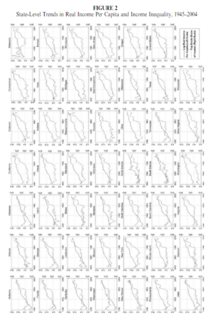 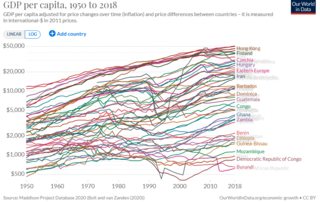 Both ways of visualization have their problems as the charts on the left are hard to read even on A4 due to their size, while chart on the right is even worse as everything overlaps and it becomes completely unintelligible.

Question: Are there any studies/technical reports/academic literature in general that uses some alternative ways to visualize macroeconomic longitudinal macro data?

I am primarily looking for some examples applied to settings like U.S. or EU state level data (i.e. some longitudinal data with $N>20$).

PS: the visualization does not necessary needs to be 'exotic'. For example, I know US can be geographically divided into West, Midwest, South and North and North East. Unfortunately, from my experience even splitting states into 4 smaller panel series produces 'spaghetti' graph (but perhaps there is some other way how to make some trade-off between having one giant spaghetti graph and having individual graph per state?).

PPS: Even though I am looking for examples applied to macro data, I am willing to accept examples from other areas as long as it can be argued that visualization would be useful for macro data as well.

Browse other questions tagged macroeconomics reference-request paneldata or ask your own question.

5
Alternative to Intermediate-macroeconomics book by Mankiw
9
Getting up to Date on Macro
3
Simulating macro / benchmark data
3
Term for rapid economic growth when starting over or in a new place
4
What's a good alternative to Romer's Advanced Macroeconomics?
1
Data of Inflation and unemployment for a Panel Data
0
Does analysis at two points in time count as 'longitudinal'?
5
Up-to-date survey of panel data models
0
Macroeconomic model or knowledge base representing connected industries in the world