My question is, then, to what extent do modern progressive income tax systems match money's "actual" quantity/value curve? Presumably this curve is something that could be estimated/calculated/measured, correct? But as far as I'm aware, no modern taxation system is set with respect to any theoretical or actual quantity/value curve for money.

taxation nonexpert optimal-taxation
Share
Improve this question
edited May 11 '21 at 19:22

No they do not for several reasons:

Correction of Misinformation in The Question

Let me first address some misconceptions/misinformation in your question before answering the question:

This is incorrect understanding of optimal taxation literature.

I am not sure where you (mis)heard the above, but it is extremely inaccurate statement.

They are based on the following optimal non-linear tax function which comes from the seminal works of Mirrlees (1971) (who in fact got Nobel Prize in Economics for this contribution), Diamond (1998) and Saez (2001). The optimal marginal income tax will be given by:

I wont go over every single term in the formula as this would turn this answer into a book but broadly speaking the first part $\left( 1 + \frac{1}{\epsilon_{lT}^*} \right)$ is given by elasticity of labor supply to income taxes and you can think of it as an 'efficiency' parameter, the second part $\frac{\int (1-b_m)f(z_m)dzm}{1-F(z_n)}$ tells us what the marginal benefit of redistribution is and this marginal benefit factors in underlying actual welfare which is captured by $b_n$ which depends on both utility of consumers and the societal utility function, and finally $\frac{1-F(z_n)}{z_nf(z_n0)}$ is the part that captures the relative magnitude of distortions created by this taxation. Again since we are talking about improvements in actual underlying utility what the aggregate price level is does not matter.

Now utility does enter the problem via $b$, but there is no principle of equal sacrifice or anything like that.

A) Utilitarian social welfare function - This social welfare function is based on the idea that poorer people value on a margin 1 dollar more than richer people - but by no means it implies 'equal sacrifice'. As a matter of fact if there would be no efficiency cost to taxation a utilitarian would make all incomes completely equal since if there is any person anywhere with higher income than someone else that means aggregate utility could be increased by moving that dollar from higher income person to poor person. Utilitarians are not trying to make sure everyone sacrifices equal utility - they care about maximizing total utility.

C) Charitable conservative/Libertarian social welfare function - This one is typically also based on MaxMin criterion with a twist that although poorest still get welfare weight of 1 people who are not poorest also get some non-zero welfare weights (Atkinson 1995 and Diamond 1998). Again nothing to do with idea of equal sacrifice when it comes to utility.

For example, early Mirrlees (1971) and Tuomala (1984) simulations based on assumption of log-normal distribution yielded regressive (but approximately linear) marginal tax rates even under maxmin or utilitarian scenarios (e.g. see example below). 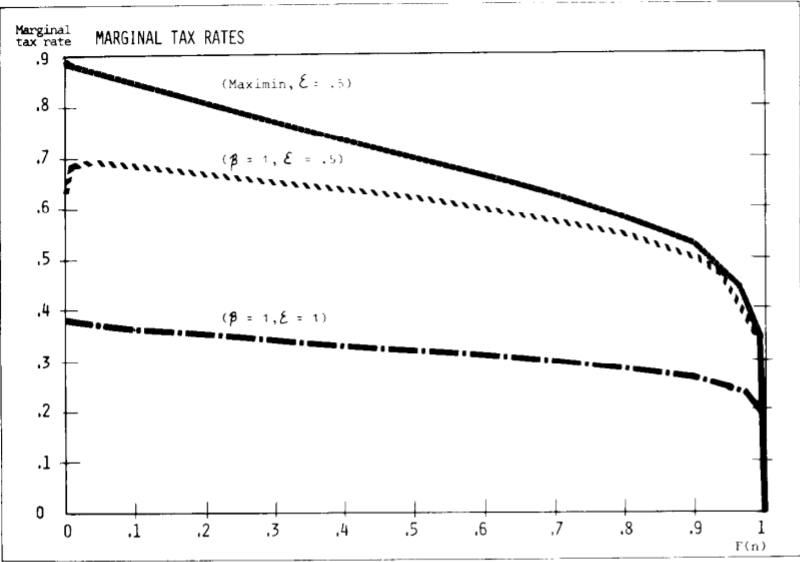 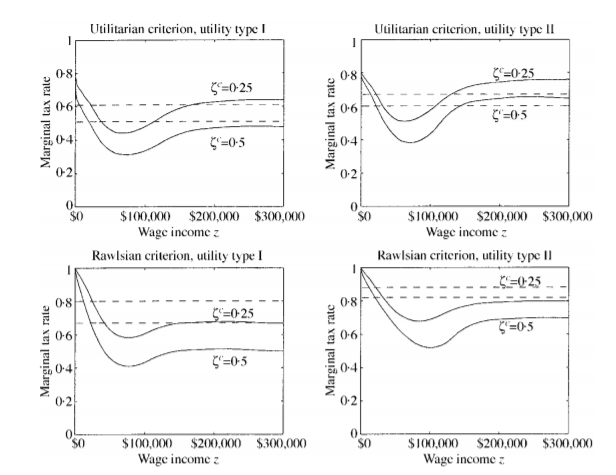 So the premises of your question are prima facie wrong. Even though it is probably at least in principle possible to derive some new social welfare function that would be about equal sacrifice, I know of no published research or even famous economist advocating such principle. The shape of an optimal marginal income taxes is primarily determined by shape of income distribution, different moral philosophies typically stretch or squeeze it or move it up and down (of course, one can create arbitrary moral philosophy and some would probably change a shape itself significantly but that is not what you will see with the usual ones).

My question is, then, to what extent do modern progressive income tax systems match money's "actual" quantity/value curve?

If I reinterpret this question about asking whether modern progressive income tax systems match the ones prescribed by optimal income tax calculations, the answer is that they simply generally don't. If they do it is often by accident rather than an intent.

For example, below you can see simulation of utilitarian and Rawlsian optimal marginal tax schedules in the Netherlands compared to the real observed ones from Zoutman et al (2012): 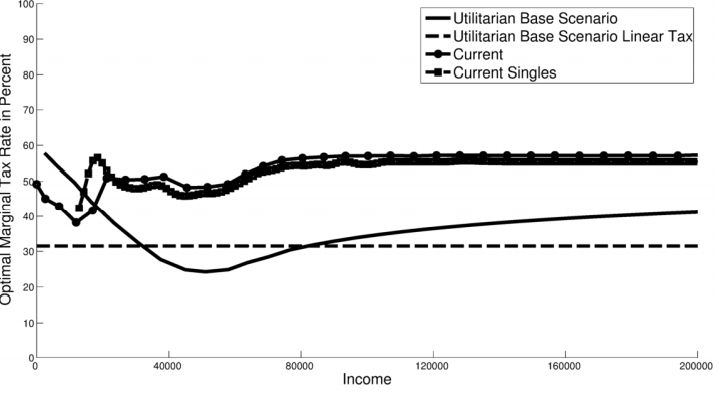 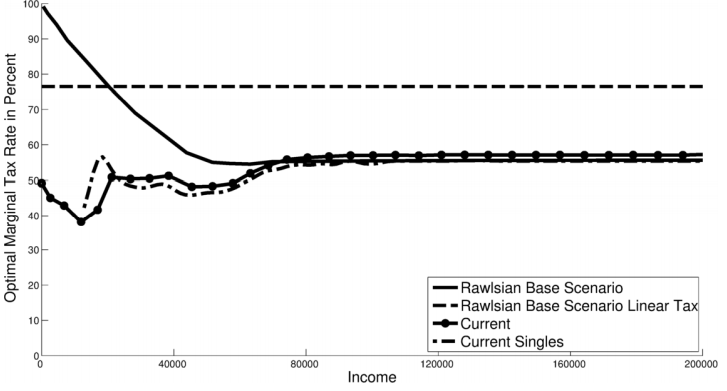 First as you can clearly see the utilitarian optimal marginal tax rate is completely different from the real observed one (although they intersect at 1 point).

Second, the optimal income taxation under Rawlsian scenario also intersects the real marginal tax rates only at a single point, although here above about 80000 euro income the optimal marginal income taxes are more close to the real observed ones, they still not match, and below 80000 euro they completely diverge.

The result that you see above for the Netherlands is not unique (it is not possible to go over all literature and all simulations in scope of SE answer but I never seen work that would show real life progressive marginal tax rates match the optimal ones), even though many countries have different tax codes in most countries you will get match between optimal marginal income tax schedule and real marginal income tax schedule at best at a single point (in case they cross) but often not even that. This is typically explained by the fact that taxes are determined via democratic processes so we should not even expect them to match anything what is predicted by optimal taxation literature. In fact, as shown and argued by Zoutman, Jacobs & Jongen (2016) real world tax systems are often set up to give some extra weights to middle/upper middle class and this is argued to be due to their political importance.

Not the answer you're looking for? Browse other questions tagged taxation nonexpert optimal-taxation or ask your own question.

1
Can a progressive marginal taxation be regressive in terms of average tax rate?
0
Does a more even distribution of wealth result in lower taxation?