Why we need to control for the interation of year and industry fixed effects?

regression international-economics fixed-effects
Share
Improve this question
edited May 15 '21 at 5:23

When you control for not just year fixed effects but instead year-region or year-industry it adds flexibility.

The year fixed effects controls in a flexible manner for the time-trend and is more flexible - less restrictive - than for example assuming that the time trend is for example linear $a \cdot t$, second order polynomial $at + bt^2$, exponential $exp(at)$ ect.

Nevertheless, year fixed effects are still restrictive compared to year-region or year-industry because the assume that the time trend is the same for all regions or for all industries instead of allowing different regions to follow different trends or different industries.

Consider for example this plot here 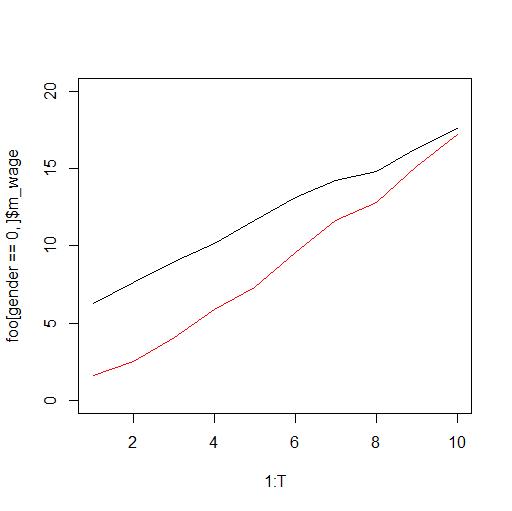 which is a good idea and for the simulated data used to generate the plot above you then get an estimate $\hat \alpha = 3.05$ clearly showing that male workers are given more in wage than female workers.

However, the true $\alpha$ is actually even larger and equal to $4$ so you are still underestimating the degree to which female workers are discriminated on the labor market.

In this example this happens because:

You can simulate this example in R using the following code

Not the answer you're looking for? Browse other questions tagged regression international-economics fixed-effects or ask your own question.

2
Year effects inconsistent between random effects and fixed effects
0
Fixed Effects Estimation and Inconsistency
3
How to justify the treatment and control groups for Difference-In-Difference with staggered implementation of laws?
2
Why we need to add firm and year relating independent variables in two-way fixed effect model?
0
A revisit to simple DID and Generalised DID
0
What are the difference between industry fixed effects and industry*year fixed effects?