I am trying to teach myself microeconomics via video series. I have a fairly good mathematics foundation, currently studying Partial Differential Equations and having gone through all the prereqs you would expect. One thing that is massively annoying me, especially with regard to the geometry of microeconomics, is the feeling that I'm studying parts of an elephant, but not being shown the whole elephant. As an example, this series I'm watching frequently draws two graphs in $\mathbb{R}^2$ on a page, which seem to correspond to two perpendicular slices of a graph in $\mathbb{R}^3$, but the graph in $\mathbb{R}^3$ is never shown. Presumably, this is because on paper, drawing $\mathbb{R}^2$ is easier, but technology has evolved to the point that we no longer need to be constrained by what works on paper. I am seeking a presentation of economics that starts with the full three-dimensional picture and slices out planes as needed for finer analysis, a presentation that shows entire surfaces instead of flat contour plots, a presentation that uses computer animation to demonstrate graph movement over time instead of trying to cram dynamic phenomenon into static drawings.

Does this sort of introduction to economics (especially microeconomics, but perhaps also macroeconomics) exist, or does no one teach it in the above style? Is the three-dimensional picture usually focused on later in economics studies as a more advanced subject, or is it available in some educators' introductory presentations of the subject?

Of course the 3D representation exist. Below you can see 3D representation of Cobb-Douglas maximization problem with two factors and budget constrain, which is very similar to the problem solved in the video you linked (indeed you would probably not be able to find any qualitative difference in graph for that problem in the video even though this is problem from firm not consumer perspective), from Vuong (2013): 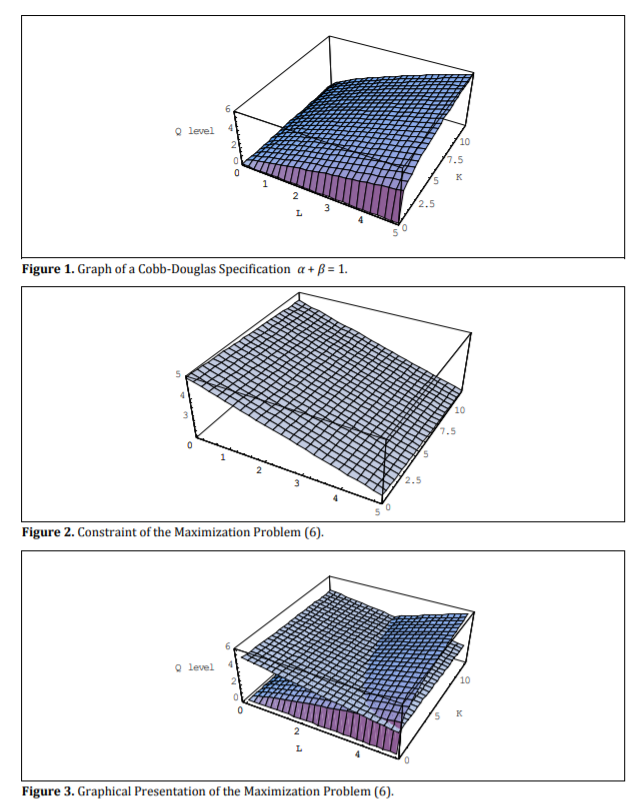 Is the three-dimensional picture usually focused on later in economics as a more advanced presentation, or is it available for introductory presentations of the subject?

Actually, paradoxically more advanced textbooks will often have less 3D examples. However, generally in graduate level textbooks you are dealing with cases where you have $n$ goods and making graphs in $n$ dimensional space would be impossible.

This being said, even in case where graduate textbooks show some simple examples they usually do it using 2D graphs. The 3D examples are nice eye candy but they do not have that much didactic value. While there might be some interesting topologies in some real-life cases, most textbook problems won't have any very interesting topology that would necessitate 3D graph. Once you understand the intuition that when doing constrained optimization with 2 goods there will be some utility sheet intersected and constrained by budget constraint plane (equivalent to picture above) there is not that much more didactic value in these plots and you usually gain more from having 2D representations of part of the problem.

It's not done in two dimensions because it's easier to draw on paper. It's done in two dimensions because if you can grasp the concepts at work in that minimal $n=2$ variable setting, you can generalize the concepts from there to all $n>2$ variable settings. So, for pedagogical reasons of simplicity of teaching, instructors keep it to $n=2$. I don't have my copy of Varian handy, so I don't remember it's graphs (if any), but if you want the full math treatment of micro (that doesn't involve fundamental proofs of things like choice theory), go with him (https://wwnorton.com/books/9780393957358).

Not the answer you're looking for? Browse other questions tagged microeconomics mathematical-economics self-study economics-education learning-curve or ask your own question.