Could a Cap-and-Trade and a Carbon Tax both work together as a system to reduce carbon emissions?

For example, the European Union currently has a Carbon Emissions Trading Scheme in progress the ETS which acts to cap the amount of carbon dioxide released by large corporations. However, let us imagine, for example that the UK implements a carbon tax, which taxes fossil fuels as they enter the UK (at well, mine or port of entry) based on the amout of CO2 they will emit (at an escalating cost per ton of CO2).

Could these two systems feasibly act and coexist together, or would it simply be double taxing?

The combination of the two policies could work and would have some advantages over either alone, and for a given reduction in emissions the overall cost burden on industry and consumers would not be doubled. However, the cap on emissions would weaken the effect of gradual escalation of the tax rate. 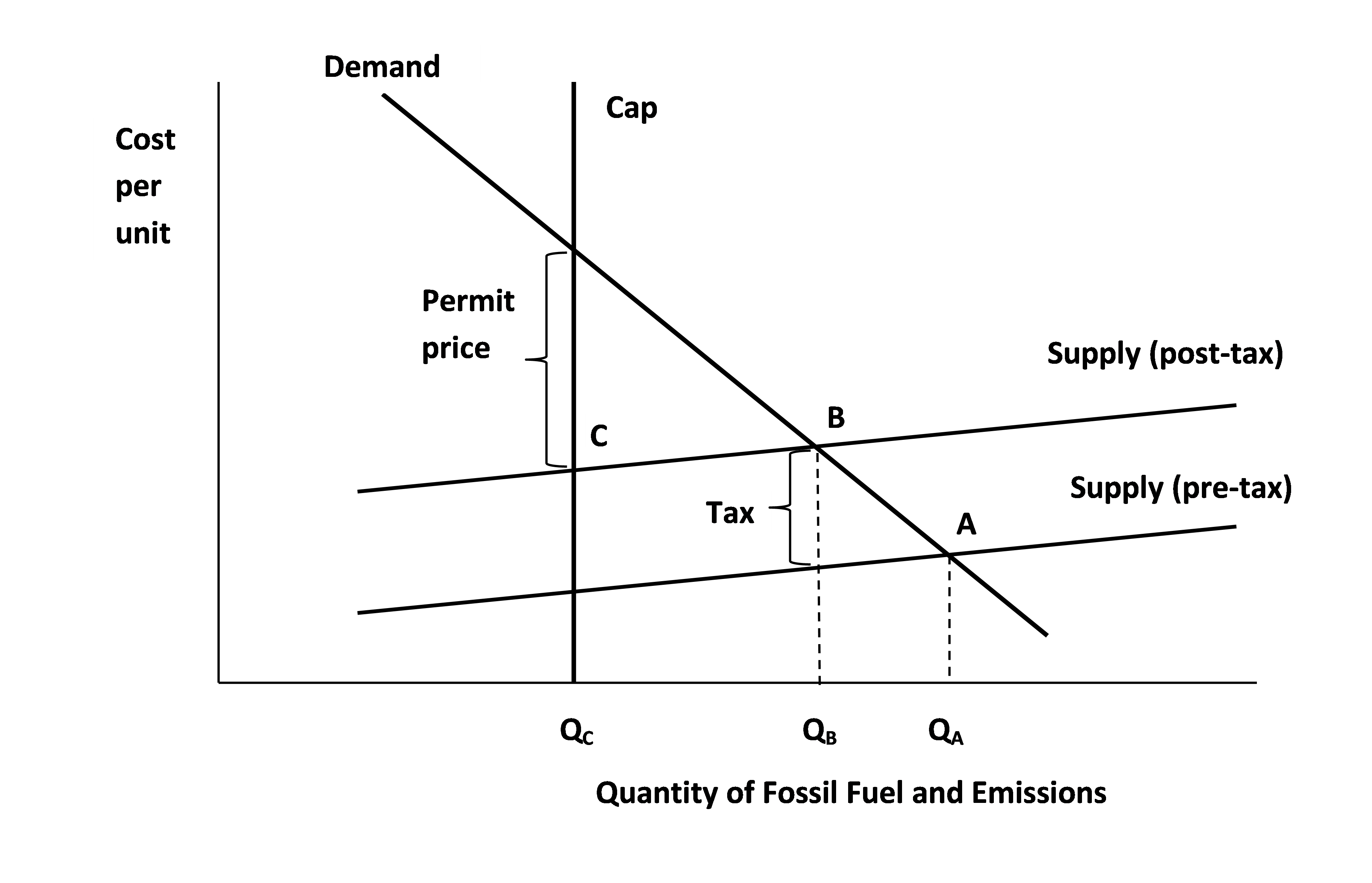 Supply is shown as highly elastic (nearly horizontal) because the UK buys large amounts of its fossil fuels, especially coal, on competitive international markets. In the absence of policy intervention, equilibrium is at point A with consumption and production (assuming no change in stocks) at $Q_A$, which also represents emissions. Note however that while consumption and emissions relate to the UK, production includes amounts produced elsewhere and imported to the UK.

The effect of the carbon tax is to raise the supply curve vertically by the amount of the tax. In the absence of other measures, the new equilibrium is at B. Production, consumption and emissions fall to $Q_B$. The cost burden of the tax is mainly shared between users of fossil fuels and consumers of goods produced using fossil fuels, the shares depending on elasticities in particular markets. A share of the burden would also take the form of a fall in the price received by fossil fuel producers, but this would be small given the elastic supply curve. The tax revenue could be used by the government in various ways with various distributional effects.

The effect of adding cap-and-trade, assuming an effectively enforced cap at $Q_C$ below $Q_B$, is to limit consumption, production and emissions to $Q_C$. Thus the part of the demand curve to the right of $Q_C$ becomes redundant. Equilibrium is brought about via the market for emissions permits, which will determine a permit price such that supply (post-tax) and constrained demand are in equilibrium at C. Distributional effects depend heavily on the mechanism for the initial allocation of permits. The ‘corporate welfare’ point in BKay’s answer relates most clearly to the case of free allocation. This can be avoided if allocation is by auction, with the revenue accruing to the government with, again, distributional consequences depending on how it is used.

Within this model we can infer the following:

Let’s now consider some ways in which the above conclusions need to be modified because of departures from the model’s assumptions. Firstly, cap-and trade, because it depends on measurement of actual emissions, is for practical reasons normally limited to large users or specific industrial sectors, certainly excluding household use. By contrast, a carbon tax levied at point of entry on the carbon content of the fuel is a simple and effective way of bringing all consumption of fossil fuels within the scope of policy. In practice, therefore, users within the scope of cap-and-trade would be at (their individual equivalent of) $Q_C$, while those outside its scope would be at $Q_B$. This difference in coverage could result in emissions reduction not being achieved in the most efficient way, eg by creating a greater incentive for expensive measures by large firms than for simple measures in the home. In this respect the combined policy would be inferior to a carbon tax alone, but superior to cap-and-trade alone. A further consequence is that escalation of the tax will always reduce emissions by users outside the scope of cap-and-trade.

Secondly, fossil fuels are not homogeneous. For example, emissions can be reduced by switching from coal to natural gas in electricity generation. The combined policy (like either policy alone) would not only reduce production of fossils fuels but also encourage this type of switching.

Thirdly, the assumption that emissions depend solely on consumption of fossil fuel, though currently fairly accurate, may become less so in future. Currently the main ways in which carbon emissions can be reduced are improved fuel-efficiency, switching to alternative energy sources, and energy-saving measures such as improved insulation. However, the implementation of carbon capture and storage (see here) may be beginning to weaken the link between consumption and emissions. It is desirable therefore that policy should include an element based on actual measured emissions. In this respect either the combined policy or cap-and-trade alone are superior to a carbon tax based solely on carbon content.

This is a bit glib, but it has been argued that :

For example by Greg Mankiw.

So mixed solutions of carbon taxes and cap and trade can have less corporate subsidies than pure cap and trade systems. But since this may allow more robust political constituencies to form around carbon reduction, it might be worth it to have some.

Not the answer you're looking for? Browse other questions tagged taxation environmental-economics or ask your own question.

5
Is the international economic system too chaotic to “work towards” carbon emission reduction
1
Could a carbon tax be a substitute for VAT?