Why could China, much poorer than US, lend so much money to US?

The GDP per capita of China is only a fifth of that of US. But China has lent more than a trillion dollars to US.

How could the much poorer China lend so much money? Where did those money come from?

Let's start with the balance of trade between the US and China. China exports far more to the US than it imports. The difference (trade balance) is over $200 billion a year: 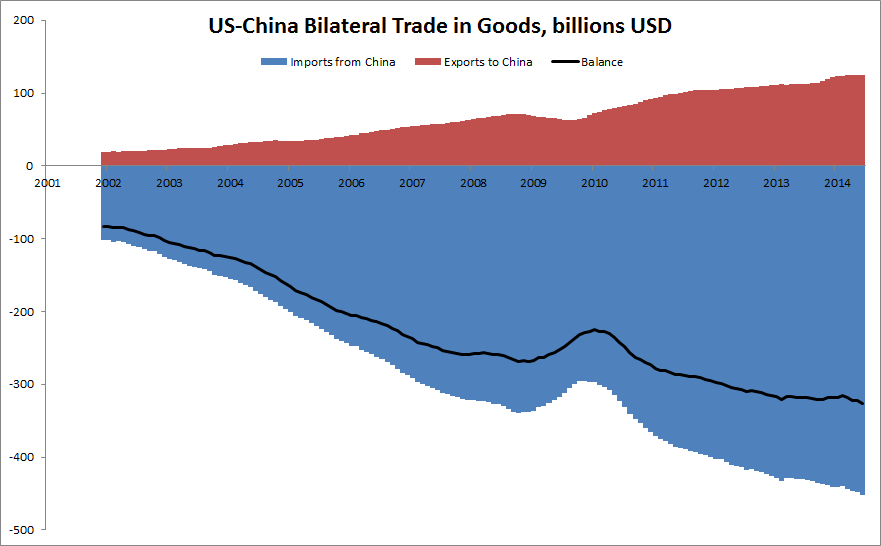 China's labor force is about 800 million workers according to the World Bank. That is likely understated, BTW. But assuming 800 million workers and \$450 billion in China-US exports, that is just ~$560/year per worker. So you don't need a lot of GDP per capita to build up a massive trade balance.

Now, how does the trade balance affect US debt? Since China is exporting more than it imports to the US, it receives a surplus of US dollars in return. The US also exports to China, resulting in RMB outflows to the US. But since the China exports >> US exports, the flow of trade payments correspondingly shows US dollars >> China RMB.

This causes a supply-demand imbalance because the supply of USD is much greater than the supply of RMB. That would normally cause the exchange rate to rise so that the RMB appreciates against the dollar.

But, China has historically wanted to keep its exchange rate low, so as to encourage exports. So it needs to balance out this supply-demand imbalance. Fortunately (for China), the US government runs a huge deficit annually which it needs to borrow in USD to fund. So China just turns around and lends the USD back to the US, in effect "re-exporting" the USD back to the US.

This helps China keep the exchange rate low, and results in a growing debt balance between the US government and China: 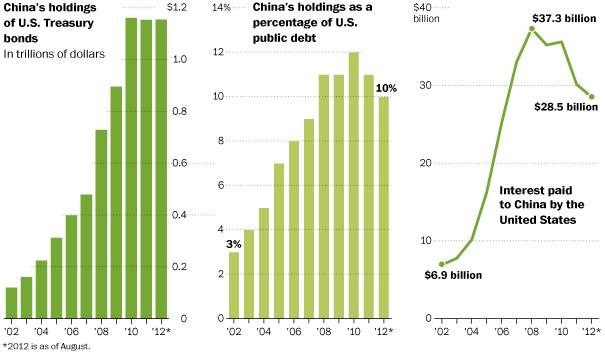 This shows why low GDP per capita in China can still result in large sovereign indebtedness to China.

You don't have to be richer than someone to lend them money. You only need to have money to lend. China has a lot of money to lend because it has a high savings rate. In the past, it preferred to lend the money to the US, because that would allow the US to buy more goods from China. However, the situation is now changing.

Not the answer you're looking for? Browse other questions tagged international-economics government-debt or ask your own question.

7
Why can't a government print money to pay its debt?
3
What would happen if China called in its debt?
0
Debt-to-GDP ratio in connection to inflation
5
Why don't governments exploit negative interest rates more than they currently do?
2
What is the upper limit of circulating money on earth?
0
Won't countries be in trouble if all sovereign debtors demand payment?
0
What is the difference between "borrowing" money and "printing" money?
1
Economic indicators for government debt (sovereign debt)
2
On what basis do countries repay international loans?