Correlation between CPI and GDP

What is the relationship between GDP and CPI(consumer price index)? My thinking is that if the CPI increases, this means that the market basket cost has increased, therefore, the consumer spending has increased. If the consumer spending increases, then GDP increases. However, depending on the consumer preferences, CPI can either underestimate or overestimate the cost of living. So from here, I cannot draw consequences about how CPI affects GDP or vice versa. Can someone please explain this? Is my thinking correct? Can there be any additions to these?

Any help would be appreciated!

http://econsmalaysia.blogspot.my/2013/05/gdp-deflator-inflation-consumer.html. Here read this. Its almost a non-related type of measurement

The differences in calculation are quite substantial and meaningful – they’re not looking at the same thing. In fact, calculating the GDP deflator is fairly convoluted as these things go – first tabulate all goods and services in current prices, then measure the same goods and services in prices prevailing in the base year, then calculate the ratio of current price production to constant price production. This ratio (multiplied by 100) is the GDP Deflator index, from which growth rates (inflation) can be calculated.

The CPI on the other hand, is based on changes in prices only, as the volume of goods consumed by a “representative” (average) household is taken to be fixed. The index is just a weighted average of the changes in prices across the same basket of goods.

As an example, below are the GDP deflator and CPI for Malaysia, which show weak correlation 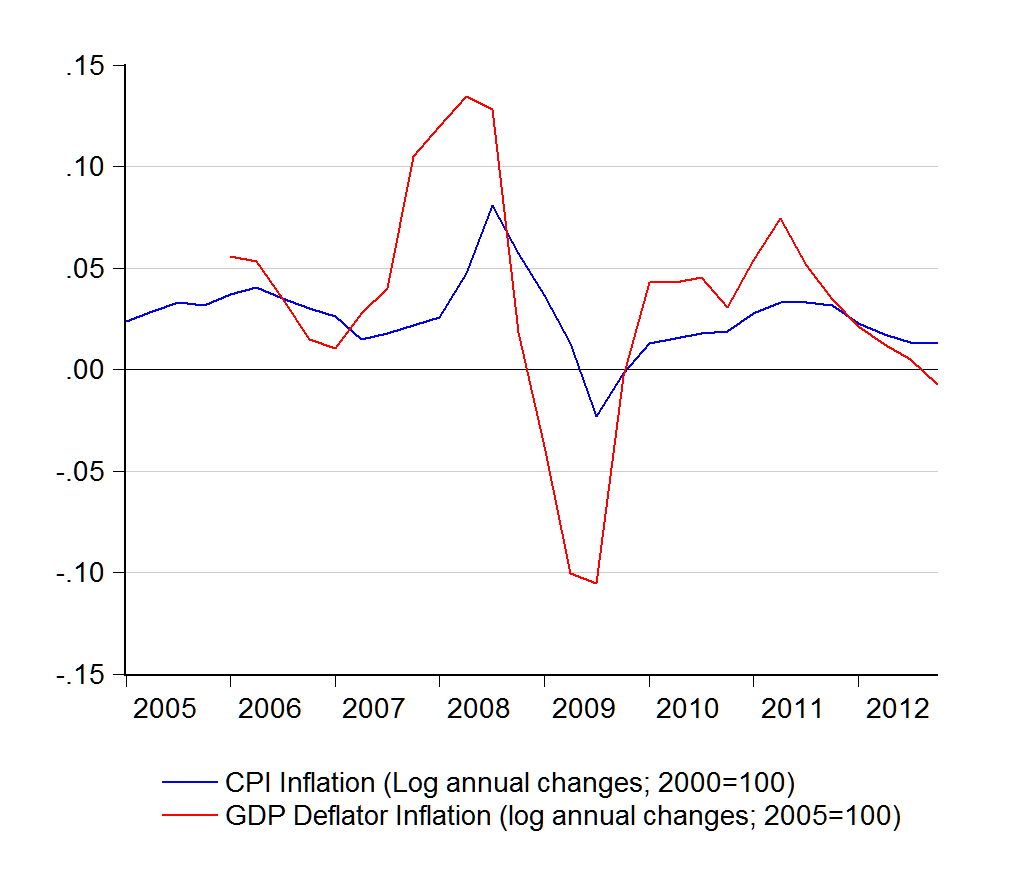 The key thing to understand is that while both can be affected by broad macro policy (like loose money), they do not neccessarily always drive each other, as the GDP deflator could be driven by a surge in export commodity pricing that is largely captured by foreign firms with little corresponding increase in pay to local workers and consequently little increase in CPI.

11
Inflation and economic growth
2
Can CPI and real GDP have high correlation?

2
What are the consequences of government spending by imposing tax?
8
How is software treated in Gross Domestic Product calculations?
3
Correlation and Causality: Data comparison of educational spending and GDP growth
2
Do house prices increases affect inflation?
2
Can CPI and real GDP have high correlation?
0
Debt-to-GDP ratio in connection to inflation
0
A hypothetical question on neutrality of money
2
How to estimate "necessary" economic output using Leontief input-output impact analysis? In particular: how to handle imports