This example appears in a different question, but there is something I don't understand. Maybe this question is better suitated for algebra stackexchange.

Does this function satisfy diminising MRS?
The answer is: no, because if α >1 the graph curve is concave.

I perfectly understand the theory, but how do I actually draw the curve from the given function to test the answer? Algebrically/geometrically/visually what is the given function (f,c) = α(fα+cα)$\frac{1}{α}$ ? Is it actually the equation of the curve? Why does it look so weird? And what is α ? Where would something like α come into play when measuring someone's utility?

Analytically you just need to examine the second derivatives of a function. Following Sydsaeter et al FEMA pp. 466 a multivariate $C^2$ function of two variables $f(x,y)$ is concave when:

So analytically you can just calculate the above. In your case the function is $U(f,c)$ but otherwise you are just applying the above.

You just need to plot the function and look at its shape. The concave shape in 3D will look like cupola of a dome, whereas convex shape looks like the bowl (at least that is how I like to think about it in 3D).

Below you can see the plot for your function without any restrictions made in Wolfram Alpha. You need to do that for some particular parameters here I have chosen $\alpha = 0.5$ but the shape would be similar for any $0<\alpha<1$. As you can see for $f>0$ and $c>0$ the function is clearly concave, and this is what's referenced in the answer (again in economics typically we restrict variables to be positive unless stated otherwise), but you can also see that if you do not make any restrictions on $f$ and $c$ function is convex in III quadrant. 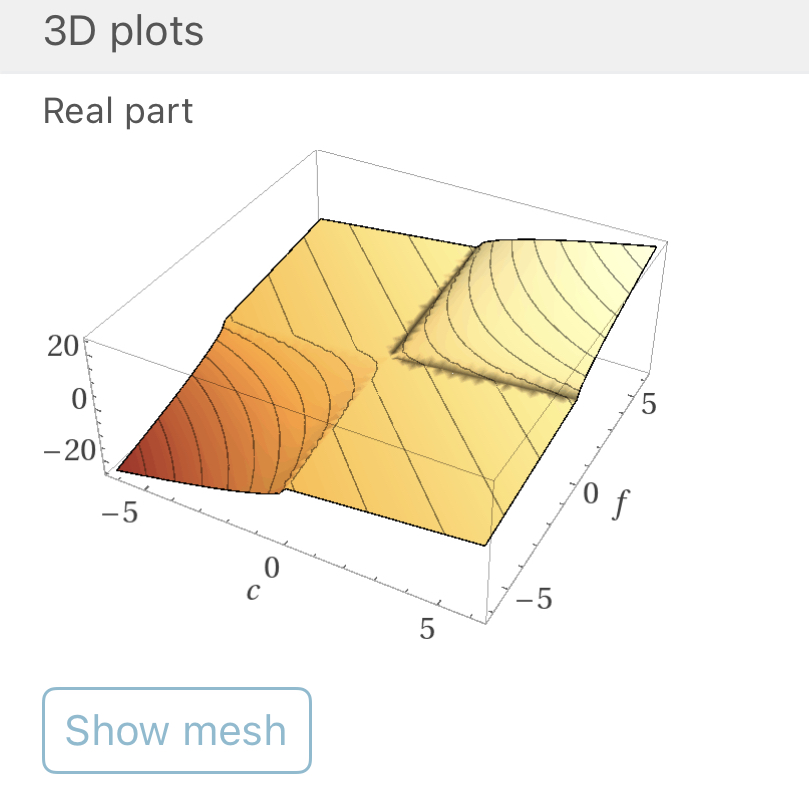 This is an expansion on @1muflon1's answer.

In the utility function, $\alpha$ allows for an alternative to a linear growth function, especially when the parameters are close to zero. This has practical applications; for instance, the example function you have above is a special case of the CES utility function.

Here is a shortcut for those mathematically inclined: note that in this special case $U$ is a homogeneous function of order $1$. From Altenberg (2012)1, it is sufficient to show that $U$ is convex in just one variable.

The Mathematica plot provided above is great, as the contour lines evidently show convexity/concavity at a given set of coordinates. For those who don't have a Mathematica subscription and wish to interact with the contour plot, I have made a quick GeoGebra plot that is shared publicly.

Note that there is a lack of contours on the other three quadrants, as $U(f,c)$ is not defined when $\alpha$ is not an integer.

Not the answer you're looking for? Browse other questions tagged utility linear-algebra or ask your own question.