What should we do if the subsample have the opposite results to the general results?

Did you face the same problem before, what do you normally do to solve this things. My senior friend told me it is a kind of paradox, it is better that we ignore this kind of subsample. Their argument is that the subsample should present the same direction with the whole sample.

Update: For the benefit of readers, I recommend you to read all the answers and comments because they are all really valuable.

I'd interact the regressor you are interested in with a dummy for the country being developed and see what happens. Its entirely possible that the mechanisms at play in developed contries are different from those in the rest of the world. Depending on what your goal is you might satisfy yourself with the observation that the effects are different for the two groups of countries or you might think about modelling the transmission mechanism explicitely.

This sounds like a case of Simpson's Paradox. Did you control for fixed effects? You might also have heterogeneity - there may be different results in developing vs developed countries.

Generally, it's not wise to ignore something interesting in your data, but I defer to the advisor who's familiar with the area. It may be a known phenomenon that isn't interesting to people in the domain anymore.

One exception is when the distribution of $X_0$ and $X_1$ are identical. Intuitively, this corresponds to the notion that $X$ is distributed independent of group membership. In this case, $X_0'X_0 \approx X_1'X_1$, so $W_1$ and $W_2$ are diagonal matrices with on the diagonals the relative sample sizes of the two subgroups. In this case, every coefficient of $\hat \beta$ is then a weighted average of the corresponding coefficient in $\hat \beta_1$ and $\hat \beta_2$.

To see the intuition behind above result, consider the picture below. There's 6 data points divided in two groups: the green and blue dots. The within group regressions (red lines) give a negative slope. However, if we run the regression on the entire sample, we get a positive slope (purple line). This is due tot the fact that the second group has both (on average) higher values of $x$ and higher values of $y$, that overturn the negative within group association. 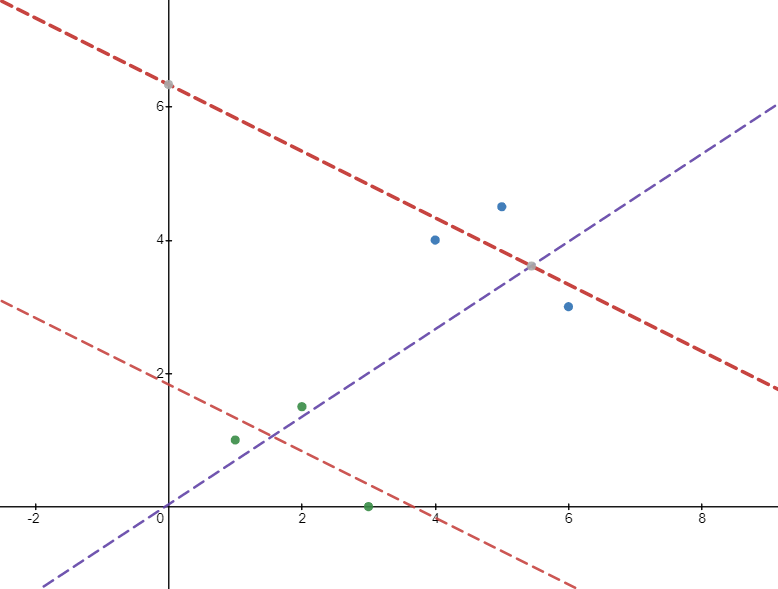 As an example consider the association between firm wages and employment and assume that you have a sample across different sectors. It is possible that within each sector there could be a negative association (as higher wages may lead to less profits). However, it might also be the case that across sectors, there is a positive relationship: as more profitable sectors pay higher wages.

Not the answer you're looking for? Browse other questions tagged econometrics regression international-economics or ask your own question.

0
How to visualize when the signs of two subsamples are opposite and example? (Simpson Paradox)
0
Asking for subsample test approaches
1
How to classify sample by time-variant index?

3
How to justify the treatment and control groups for Difference-In-Difference with staggered implementation of laws?
5
What shoud we do when the expected treatment overlaps control sample in DID?
0
Subsampling result explanation?
3
Error structure in subsampling
0
How to visualize when the signs of two subsamples are opposite and example? (Simpson Paradox)