tradingeconomics shows an M1 money supply of the past year as follows: 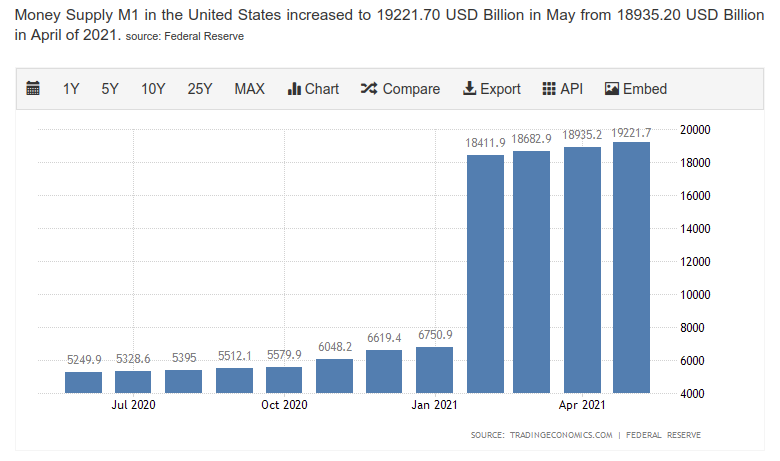 This suggests an unusually high increase of ~170% in February 2021.

Is this increase real or somehow an artifact of the way the data has been generated, e.g., if an underlying definition related to M1 has changed suddenly?

No, the data seems to be off by about a year. The Trading Economics website states that the source of their data is the Federal Reserve. Fed makes its data avaiable via FRED dataset.

FRED data show large increase in M1, but not in 2021 but in 2020 as you can see below. The numbers are also bit off between trading economics and FRED data. However, the FRED data show even larger growth of 233% between April and May 2020.

There actually was change in methodology from April to May, as FRED explains:

Beginning May 2020, M1 consists of (1) currency outside the U.S. Treasury, Federal Reserve Banks, and the vaults of depository institutions; (2) demand deposits at commercial banks (excluding those amounts held by depository institutions, the U.S. government, and foreign banks and official institutions) less cash items in the process of collection and Federal Reserve float; and (3) other liquid deposits, consisting of OCDs and savings deposits (including money market deposit accounts). Seasonally adjusted M1 is constructed by summing currency, demand deposits, and OCDs (before May 2020) or other liquid deposits (beginning May 2020), each seasonally adjusted separately.

However, the change in methodology does not actually fully or even mainly explains the increase. Actually FRED itself released an explainer of what is behind this increase. As they state:

This increase is shown in the FRED graph above (red line), where we measure M1’s opportunity cost as the one-year U.S. Treasury yield (green line). In late February and early March of 2020, the Fed cut its policy interest rate dramatically to help ease credit conditions during the COVID-19 crisis. The resulting acceleration in the supply of M1 can be understood largely as banks accommodating an increase in people’s demand for money. However, the opportunity cost of money has remained more or less constant throughout 2020, over which time M1 growth has accelerated. What might account for this behavior?

To help answer this question, we’ll need to talk a bit about banking regulations…

One factor responsible for this behavior may be related to a change earlier this year to Regulation D: The Federal Reserve requires banks to hold reserves against checkable deposits. But the regulation does not require banks to hold reserves against savings and money market accounts, which restrict depositors to no more than six transfers or withdrawals per month. These latter accounts are highly liquid (and in the case of some money market funds, even checkable). But because they’re not as convenient as checkable deposits, they typically compensate depositors with a more attractive interest rate.

Another measure of the money supply adds these savings deposits and checkable money funds to M1: It’s known as, you guessed it, M2. From the graph, we see that the growth rate of M2 has remained relatively stable since May 2020. This suggests that the rapid acceleration in M1 since May 2020 is mainly from money moving out of the non-M1 components of M2 into M1, rather than reflecting any acceleration in the demand for transaction balances.

Indeed as you can see from the graph below (FRED), M2 (which is far more relevant economically - this is typically what economists refer to when they talk about money supply without qualification), increased much more slowly and not as much (there was about 15% increase between February 2020 and May 2020, this was because Fed decided to monetize part of the Covid stimulus see this Yale explainer or this Brookings explainer):

Not the answer you're looking for? Browse other questions tagged money-supply federal-reserve or ask your own question.