What are the advantage of adding interactive variable over subsampling in drawing conclusions?

As 1muflon1 mentioned, there are two main advantages of adding interaction variables over subsampling are: (1) having higher sample size, leading to higher precision and (2) higher degree of freedom.

I am wondering what is the advantage of the explanation of adding interaction variables over subsampling (if having)?

Or what are the difference between explaining the results from these two regressions?

When running the regression (1) on each subsample (divide to developed and developing countries) on dependent variable Y1, I have

When running the equation (2) on the whole sample for Y1, I have: 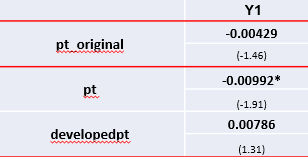 I know how to explain the second regression result:

Browse other questions tagged econometrics or ask your own question.

1
Quarterly regression, year-fixed effects
0
A revisit to simple DID and Generalised DID
2
What should we do if the subsample have the opposite results to the general results?
0
Asking for subsample test approaches
0
Subsampling result explanation?
3
Error structure in subsampling
1
Why the magnitude of coefficient of interest decrease drastically when adding an interaction variable?
0
Adding interaction and its elements into an equation confusion?