Why was Friedman so wrong about inflation?

In a famous 1977 lecture, Milton Friedman claims that inflation depends purely on the monetary policy and he proves it with a convincing chart (youtube video here) 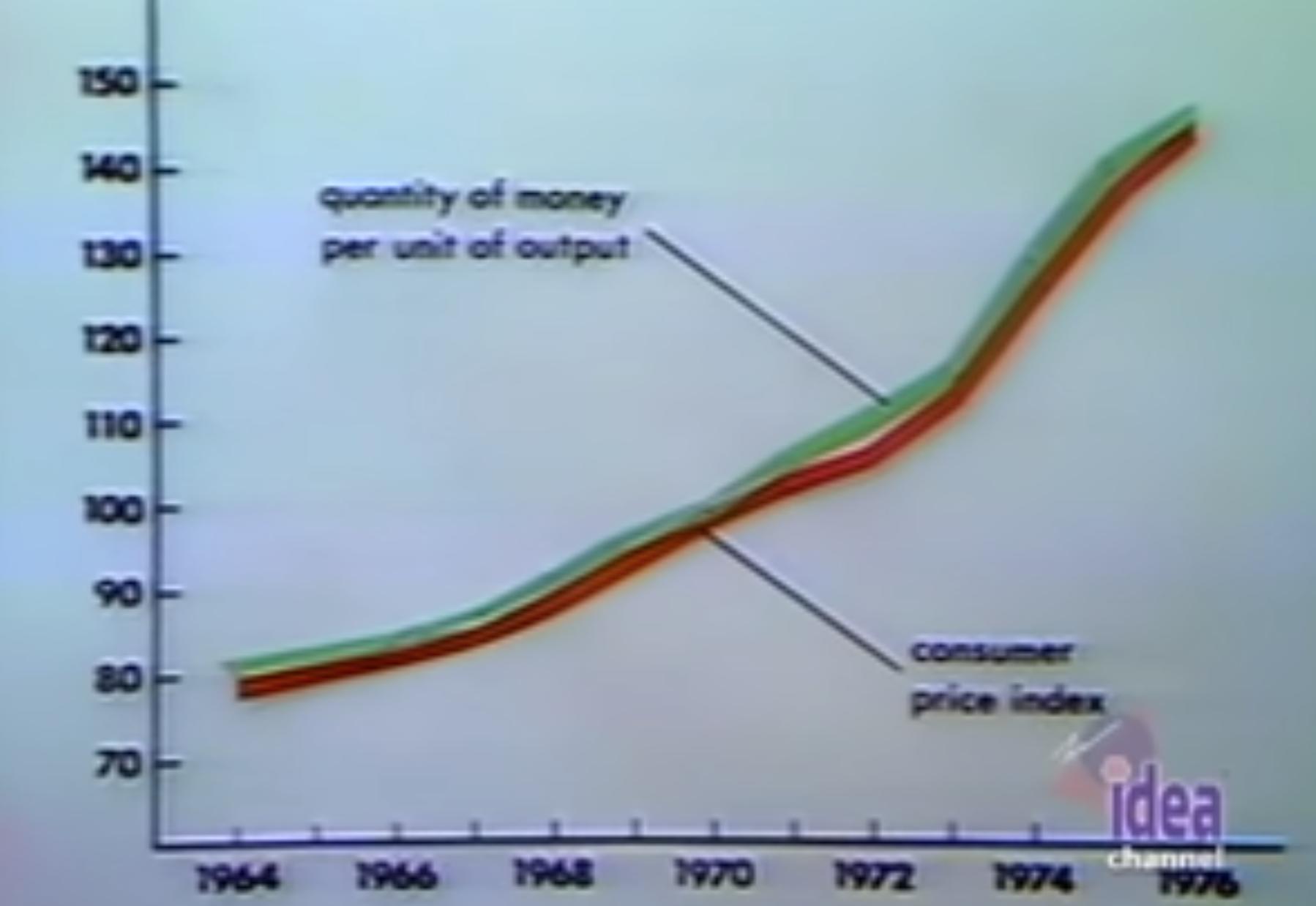 I have reproduced his chart using FRED data (links below) and it works!

However -and this looks like a perfect joke about economists making predictions- from the year after his presentation the relationship did not hold anymore.

Any idea why the relationship got much fuzzier from 1979 on? 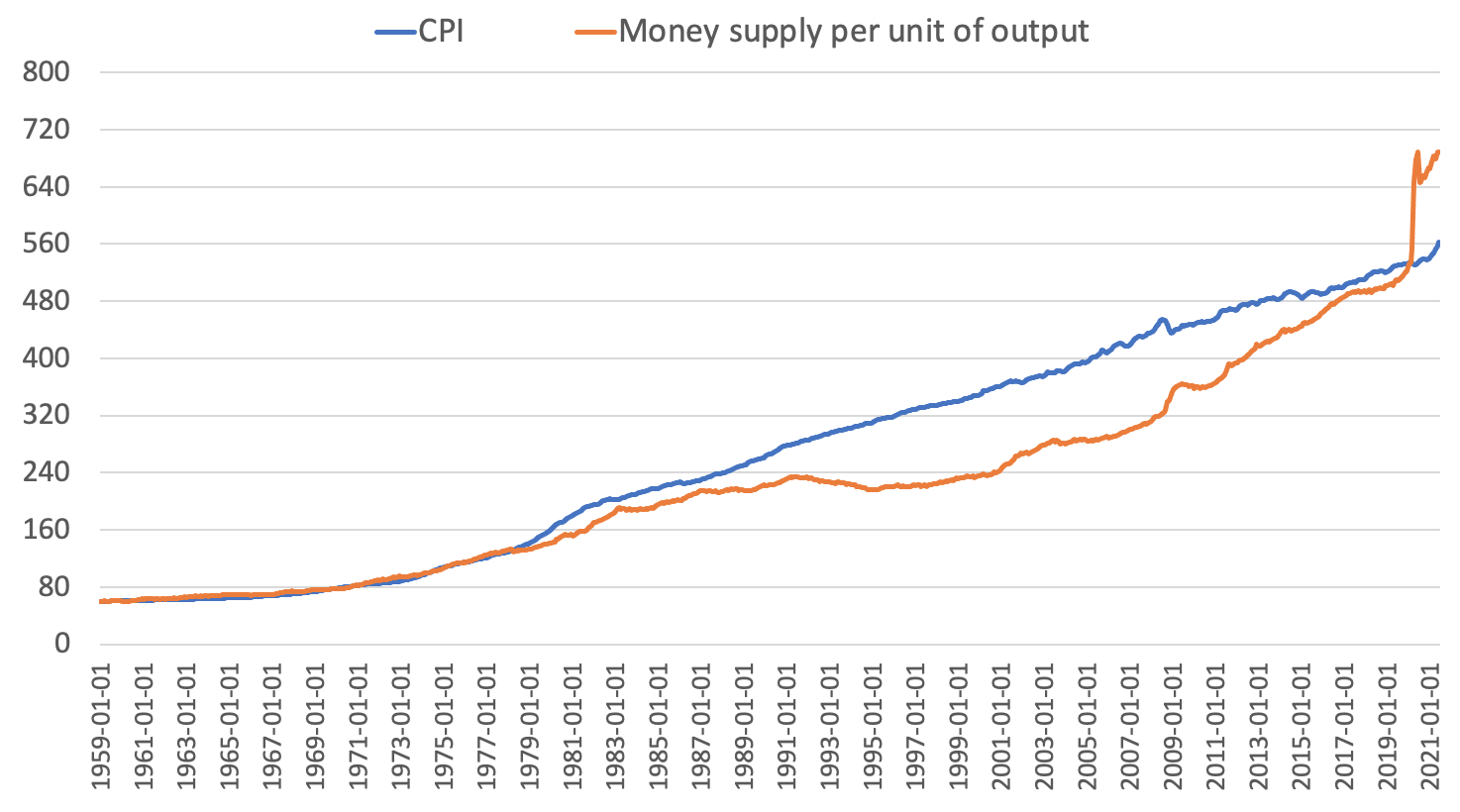 Why was Friedman so wrong about inflation?

He actually was not wrong in a broad sense, only in more specific sense. 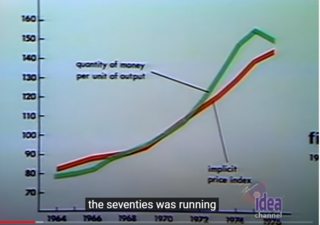 And furthermore, Friedman literally in the video states [emphasis mine]:

Again you see the same story. Now interesting thing that you can see that the quantity of money for a while later in the seventies was running ahead of the price index, but now they are coming back together again. And that is behavior you will very often observe. The quantity of money per unit of output is the major factor that from the immediate sense determines the price index but it does not operate instantaneously.

To be more specific Friedman was a proponent of the Quantity Theory of Money, given by (see Mankiw Macroeconomics pp 87) :

Which tells us that the change in price level does not depend just on money supply $M$ but also real output $Y$ (that is why Friedman plots quantity of money per unit of output) and in addition on velocity of money $V$.

So the graph you construct in itself does not contradict Friedman thesis.

However, Friedman was wrong about inflation in more specific sense.

What Friedman Was Wrong About:

Modern scholarship no longer relies on $P=\frac{MV}{Y}$ rather modern description of money market would be given by:

Friedman, was likely also wrong about host of other details (science always marches forward), but his general thesis is still considered valid by majority of economists.

Friedman, "inflation is always and everywhere a monetary phenomenon", in the sense that price increases are produced by significant increases in the amount of money. Although this wording refers to the neutrality of money in terms of shaping real economic figures, it is worth noting that this neutrality does not apply in the short term when inflation is unexpected. An example, increases in the price level P leading to the same percentage increases in the nominal wage W do not change the actual wage W / P and therefore do not change employment and output. However, if price increases are unexpected and there is no corresponding increase in nominal wage, real wages, employment and output change in the short run, ie there is a real effect of unexpected inflation. Of course, the long-term adjustment of expectations to changes in the price level certainly changes the nominal wage so that the real wage eventually returns to the original level and, consequently, the neutrality of money is valid for a long time.

Basically inflation is always and everywhere a political phenomenon. The question is whether societies want low inflation. It is reasonable to doubt this today.

Not the answer you're looking for? Browse other questions tagged inflation monetary-policy money-supply friedman or ask your own question.

5
Inflation reasons beyond Friedman
9
Inflation, cause or result of monetary emission?
2
Demand-pull inflation intuition
3
Why is wage-induced inflation a bad thing?
1
Why was the price of gold lower when gold confiscation act was issued but raised afterwards?
30
If no one knew about inflation, would inflation take place?