What is the difference between money and currency?

Is money an intangible concept and currency a way to make it physically present?

If not, then what is the difference??

Please dont duplicate it as i have read other answers and then asking.

Actually money is a pretty tangible (strictly defined) concept in it being (i) a means of transaction, (ii) a store of value, and (iii) a unit of account. It is just that not only Currency, meaning coins and notes, have such properties.

Most authors refer to currency as one component of money supply, as there are multiple other forms which money can take, other than it.

Currency is notes and coins that are available to the public at any given time. But there is also money that is deposited and thus not part of currency, e.g. demand deposits, savings deposits. Even traveler's cheques are money, yet not currency.

The traditional graphic for money supply goes a little something like this: 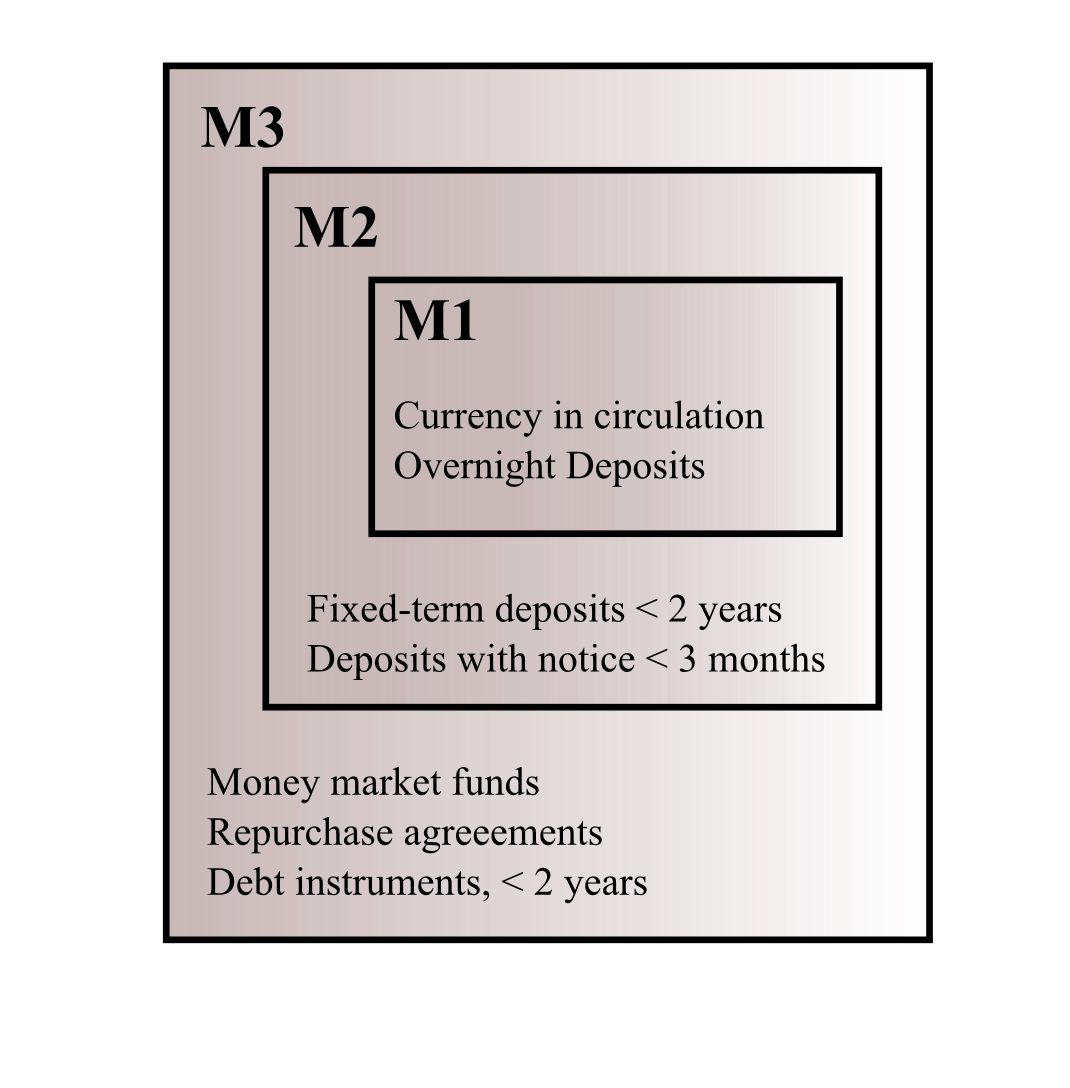 Perhaps you could say that money is part tangible/material (currency) and part intangible/immaterial (deposits).

P.S.: Excuse my puns with the word intangible.

By money we mean assets that are used and widely accepted for payments. Although this definition is in some ways a tautology (conversely: payment is the use of money) it states precisely that money can be anything used as such.

The physical form of money can vary, and there have been historically different forms of money. In order to accurately define the concept of money, it is useful to make a clear distinction between monetary assets and non-monetary assets (all other than monetary assets).

Today the definition of what money is in an economy is very specific: Money is the sum of coins, banknotes and deposits. Anything other than these three is not money. The term banknote is synonymous with the term banknote. The set of coins and banknotes is called the set of monetary circulation. But money is not just about money circulation. Deposits are deposits of individuals in commercial banks and deposits of commercial banks in the central bank.

The modern definition of money means, for example, that checks are money (as long as the amount of the check is available in the issuer's deposit account, and the check represents exactly a direct entry in the deposit account without the need to transfer banknotes).

Also money is the charge of credit and debit cards.

But in order for the money to be defined according to him modern scientific way has crossed a remarkable path, passing through the history of the most important civilizations and playing an important role in their evolution.

Not the answer you're looking for? Browse other questions tagged currency money or ask your own question.

9
What are the known / alleged problems against using energy as currency?
2
What is the difference between currency manipulation, and a fixed exchange rate regime?
2
what in real terms causes one nations currency to be more valuable than another?
8
Is money a conserved quantity?
1
Why do different countries have different currency ? Why not there are different currencies for each 10-20 kilometers?
20
Can inflation occur in a positive-sum game currency system such as the Stack Exchange reputation system?
2
why is the term fiat money or fiat currency and is it the same as legal tender or are there any differences?
0
What is the difference between microeconomics money and macroeconomics money?
1
Are US federal reserve notes money, or merely currency?