Curiousity about the accuracy of an example about consumer surplus

I know this question has almost definitely been answered in the comment section, yet I will try my best to clarify the theoretical background.

"Willingness to Pay", or WTP for short, is each individual consumer's maximum price at which they are willing to buy one unit of a commodity. By an axiomatic admission, we take it that the more of an item you want to buy, the less you wish to pay per item. This is shown in the negative slope of an elemental (and constant) demand curve.

Say you want to buy a book, with the prices shown in the picture below. The first unit can be sold to Aleisha for \$59, but won't, if the market is perfectly competitive and sellers cannot make price discriminations. This means that every unit will be sold to everybody for the same amount of cash. Next on the list you put Brad, who wants to buy the book but has a WTP of \$45, less than that of Aleisha. We make the same argument about Claudia, and then we stop at Darren: He is willing to pay less than the asking price, and so he won't buy a unit. Thus, the final quantity sold will be 3 units, determined by the balance between WTPs and asking price. 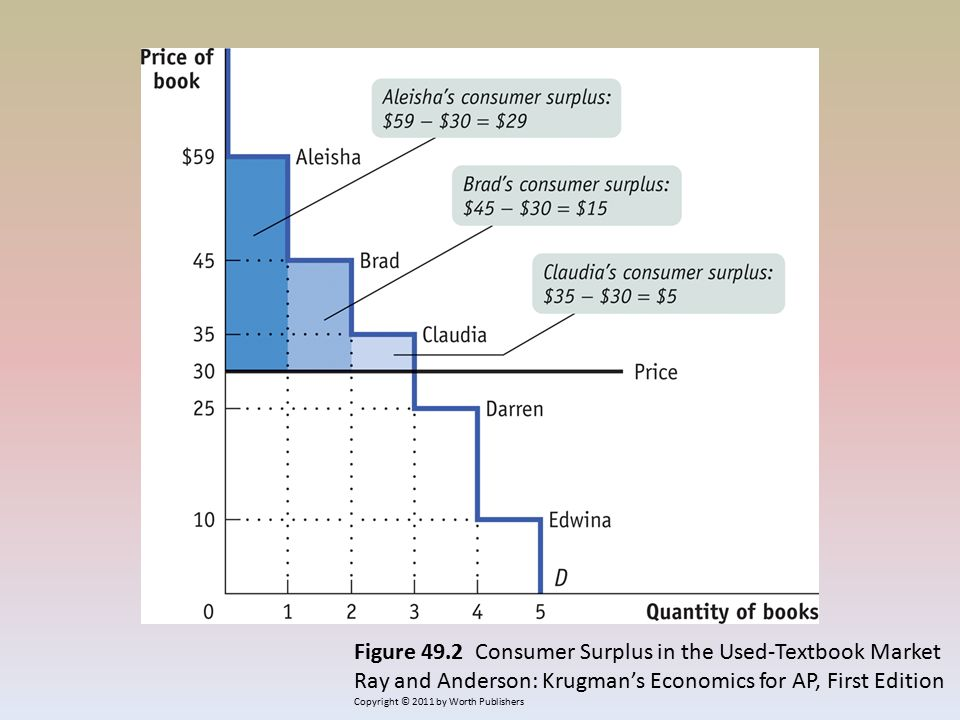 If we were to make this procedure continuous instead of discrete, we will inevitably reach a point of equilibrium between WTP and price. At that point, the final person to purchase the product would have done so exactly at his WTP - all others would have either a large or a marginal consumer surplus.

Back to the aforementioned example, we have to agree that it is correct: the final unit (1) was bought for no surplus, while all others (49) were bought at a substantial surplus.

Not the answer you're looking for? Browse other questions tagged consumer-surplus or ask your own question.

11
Price discrimination- how much is optimal?
2
Consumer Surplus question
5
Evidence that open source production processes increase efficiency and/or consumer surplus?
5
Consumer behavior with constrained demand
7
Can a monopoly INCREASE the market surplus compared with a competitive market?
1
What are the (immediate) effects of changing a good's price on consumer and producer surplus?
0
Numerical Question on a subsidized monopoly
1
Why is consumer surplus the area under the curve?
6
Does consumer surplus over-weigh the interests of high-income consumers?
2
consumer surplus decreasing