Why do the BEA's Use and Supply Tables have Industries (and not products) on the Rows?

I'm learning about Use and Supply tables, and all the tutorials (including this very nice video from the Singapore Department of Statistics) show that products are on the rows and industries are on the columns.

However, the BEA Supply Table and BEA Use Table have industries on both the rows and columns. What does it mean for Farms to supply Farms? 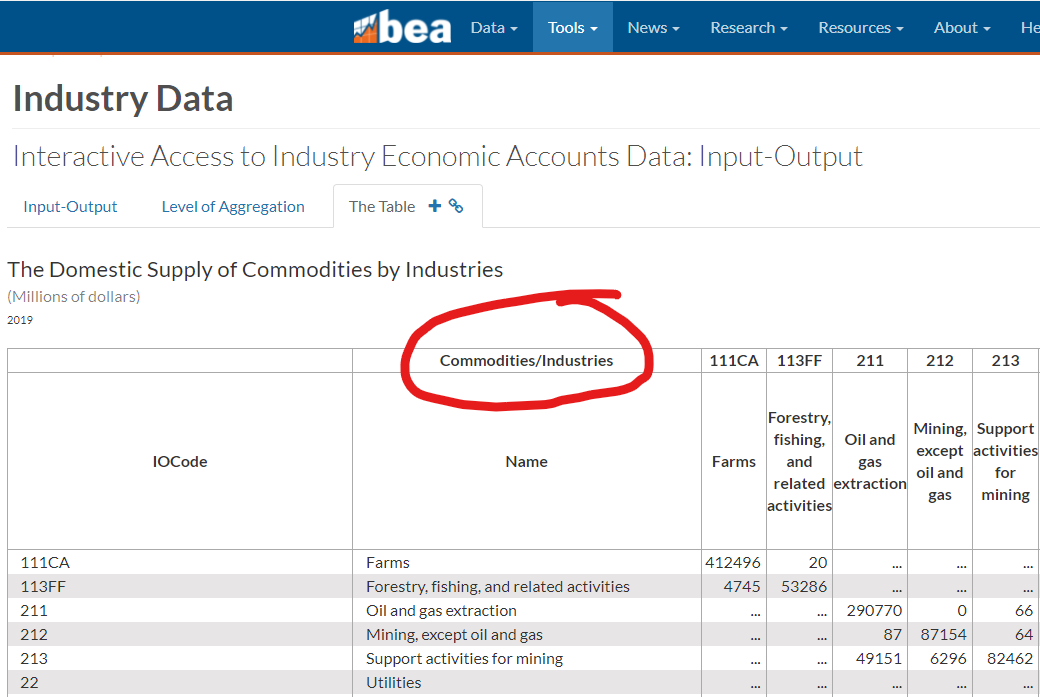 As I mentioned, the commodity called "Farms" represents the commodities produced by the industry called "Farms." This can be problematic because different industries may produce the same good. For example, the restaurant industry produces food while the hotel industry may cook meals as well as provide rooms to stay in. This problem is handled somewhat in the "redefinitions" process. You can take a look at tables before and after redefinitions here. You can read more details in the BEA IO tables handbook "Concepts and Methods of the U.S. Input-Output Accounts".

You can read more about the status of NAPCS here.

Not the answer you're looking for? Browse other questions tagged supply-and-demand input-output or ask your own question.

2
How could you partition Household Food Expenditures into Producing Industries?

6
Establish demand curve with infrequent sales
1
Why Law of Supply indicate direct relation between price and supply?
14
The supply and demand of Virtual Products
0
If aggregate demand and supply do not have a specific value, what is the point of the formula?
1
In demand and supply chart, why is it assumed that import will only happen if domestic suppliers are unable to supply?
0
Can demand side restrictions explain the productivity paradox (Solow paradox)?
1
Examples of bounded, positive, inverse demand curves
0
How to estimate the labor time required to produce all necessities in a given economy (assuming all goods/services are produced domestically)?