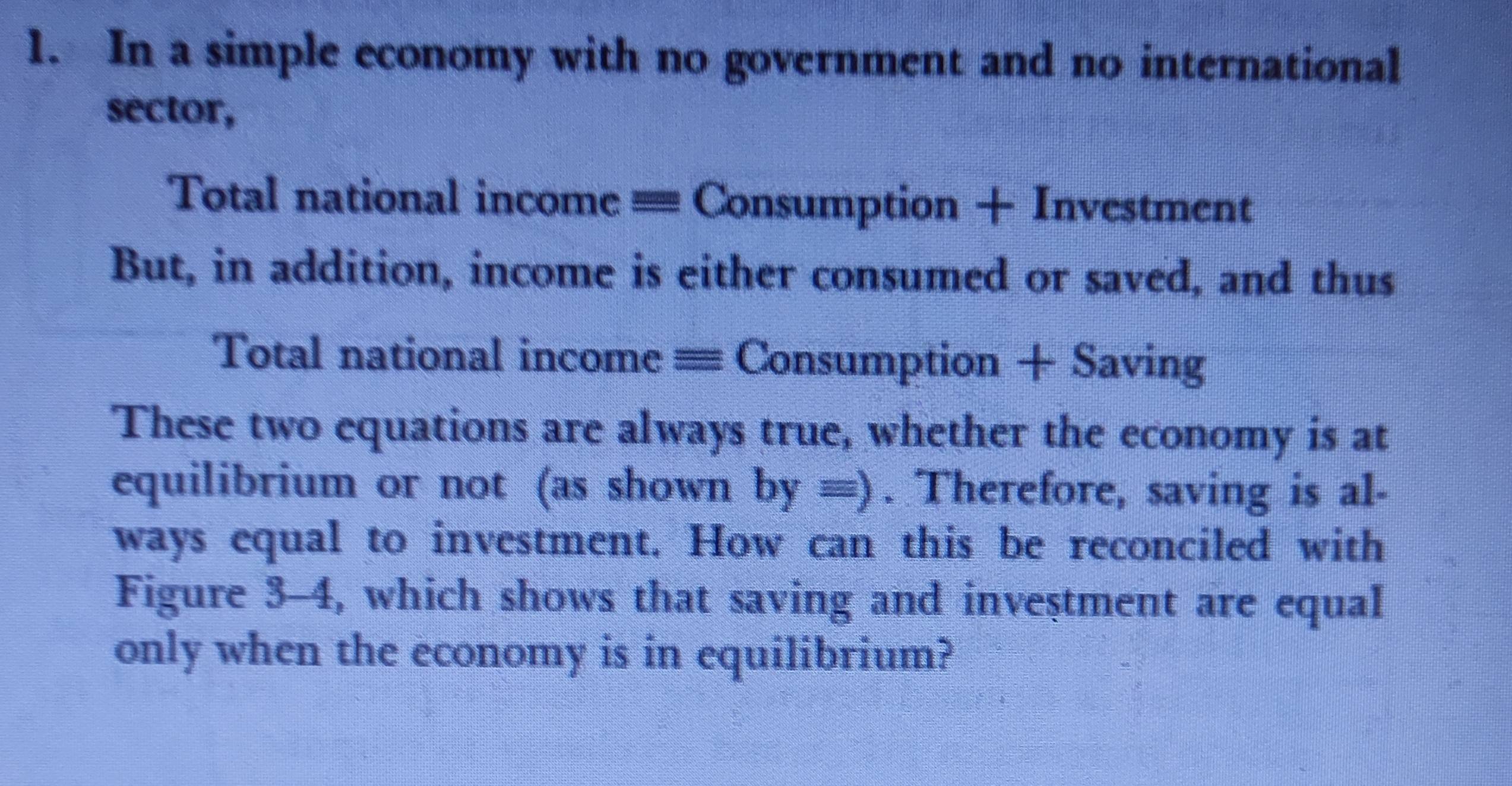 How saving equals to investment only in equilibrium? I'm confused see attached pic Nd please tell me does it can be true in general too

darshhdarshh
2711 bronze badge
New contributor
darshh is a new contributor to this site. Take care in asking for clarification, commenting, and answering. Check out our Code of Conduct.
$\endgroup$
2
Add a comment  |

It is because these two examples use the word investment in different meaning.

In the top example, investment means all investment whether it is investment into something productive or inventory investment.

In the second graph, the word “investment” is applied to investment minus inventory investment.

The key here is to distinguish between ex ante and ex post concepts of saving and investment.

These concepts were defined by the economist Gunnar Myrdal as follows (quoted here):

In the ex ante sense, investment and saving can be unequal because they represent plans or desired levels which may or may not be actualized.

In simple macro models it is commonly assumed that planned investment is largely independent of current income. This is reflected in fig 3.4 by the approximately horizontal investment demand line. The assumption can be justified by noting that normally the majority of investment is in fixed capital (buildings, plant and equipment) with an operational life of many periods, so decisions to invest are based mainly on expectations of demand in future periods.

Planned savings on the other hand are assumed to vary with income: hence the sloping savings line in fig 3.4. As a consequence, there will be a level of income at which planned investment and planned savings are in equilibrium.

Whether, and how quickly, such an equilibrium will be achieved is a further question. If income has not adjusted to bring about such an equilibrium, investment must still equal saving in the ex post sense. If, in a stuation of disequilibrium, both fixed capital investment and saving are at their planned levels for the actual level of income, then the accounting identity can (and must) be satisfied by an unplanned adjustment in the other component of investment, that is, investment in inventory.

Not the answer you're looking for? Browse other questions tagged macroeconomics keynesian-economics or ask your own question.

3
Capital in a credit frictions model
1
Is a home (primary residence) purchase a form of investment in macroeconomics?
2
Supply/Demand Curve for Excise tax that's being passed 100% on to consumers
4
Question regarding Carlstrom and Feurst (1997)
1
If saving equals investment, can there ever be a stock of savings?
1
Does investment directly influence demand?
1
Is there any fundamental reason that output elasticity of capital $<1$ in general?
5
Keynes' conception of investment
1
Where does investment originate from in the circular flow model?