What metrics would indicate a house bubble rather than genuine market values?

There are concerns that Auckland, New Zealand, is currently experiencing a housing bubble.

Auckland is one of the top 10 cities in the world on a housing unaffordability index.

The question is - how as economists can we tell whether housing prices reflect a bubble or genuine market value?

I would be looking at average wages, crime rates, happiness, and other social measures of the city (ie. it's reasonable that people would be willing to spend more on a house in a utopian city). A good answer should comprehensively list these and explain the relevance of these metrics.

The first metric to look at is house-price-to-rent ratios. Rental prices capture the value of the housing (and housing-linked) services provided by a property, including things like how safe a neighborhood is, how good the schools are, et cetera. In contrast, house prices are the capitalized value of the future stream of housing services PLUS the price of an asset (mostly land; structure value beyond the housing services it provides is negligible). As a result, a higher ratio of house prices to rents means that, controlling for the value of housing services provided, we observe people paying more for housing assets (i.e., land).

This doesn't mean that the asset is necessarily overvalued, but it at least moves you in the right direction by separating out the asset price from the value of housing services. You can then start thinking about the supply/demand fundamentals that apply to housing assets, and what you'd have to assume to support a particular valuation of the asset (things like, as Jamzy noted, whether growth in price-to-rent ratios is linked with increased home purchase borrowing).

While it is possible to rigorously define a bubble in principle (see for example asset markets where prices violate transversality conditions), in practice it can be difficult or impossible to identify actual bubbles, even ex-post.

For example, @dismalscience discusses looking at house-price-to-rent ratios. This sounds straightforward. If houses are selling for more than the net present value of their rents then you have a bubble. But there are many tricky bits in that analysis. Rental markets for single family homes are not robust and so it is difficult to impute accurate rents from the multi-family (apartment / townhouses) market that makes up most of the market. Long term residential leases at market prices are essentially non-existent so future rents are at best an educated guess. And what rate shall we discount the rents at? Discounting and Intergenerational Equity (1999) by Portney and Weyant makes the case for using everything between a discount rate of 0 and stock market returns. Trachtenberg (2011) argues that the proper discount rate for a social planner may even be negative. With all of this uncertainty and estimation error, estimates will differ. The paper Reasonable People Did Disagree: Optimism and Pessimism About the U.S. Housing Market Before the Crash (Gerardi, Foote, and Willen (2010)) shows how different scholars used price-to-rent / user-cost approaches to come to very different conclusions on if housing was over-valued.

With apologies for the somewhat journalistic answer (as others have noted, even defining a bubble in a rigorous fashion is difficult).

Information on housing supply may be of some use. Demand for housing is quite inelastic (everyone needs somewhere to live) so shifts in supply should show up mostly in prices and less in market quantities.

As an example, the UK has experience sustained house price inflation since the 1950s. Even during the recent recession, the decrease in UK prices was relatively brief and modest. If ever there was a bubble, surely this is it? 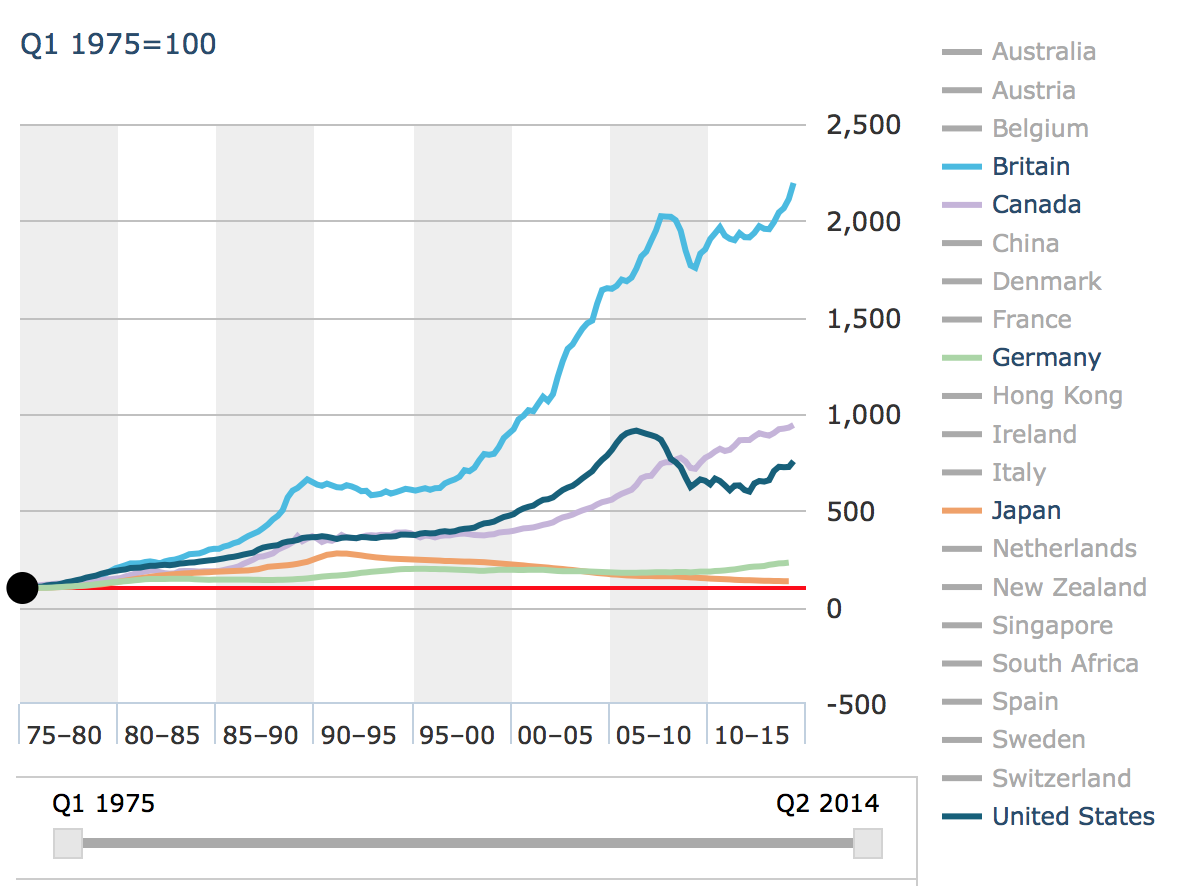 But we must remember that in a competitive market prices are determined by the intersection of supply and demand. At present the UK is building around 150,000 homes per-year, but creating around 250,000 new households per-year (source). This is part of a long-run trend initiated by large-scle public sector withdrawal from house building (and probably also due to extremely restrictive planning laws in the UK that make private development difficult):

So long as demand remains inelastic and supply fails to keep pace with growth in demand, housing will become an increasingly scarce resource and one should expect the price to increase accordingly.

It's actually quite easy. The key things to know are 1) that the majority of house purchases are made via mortgage lending, and that 2) an excess of bank lending over bank loan repayment causes money creation.

So first determine if there is an abnormally high increase in the supply of money occurring - if yes, then there is a bubble, and if not, then the increase is probably the normal one that would be expected as a result of fiscal expansion. This is fairly easy to determine by simply looking at relevant statistics for the amount of money being held in bank deposits (typically M2 or M3, the precise definitions vary between countries).

The key thing to appreciate, is that because of the normal expansion of the money supply by the banking system over time, and especially because that money directly influences house prices, an increase in house prices over long periods is to be expected simply due to the operation of the banking system. Only if economic conditions really deteriorate. i.e. Detroit does this not occur. Regulatory changes, or even simple changes in custom and practice around the amount of lending can quite easily trigger changes in fiscal expansion, for example if the banks change from requiring a 20% deposit to a 10% deposit on house purchase.

It is also possible for house lending to increase without an abnormal increase in the money supply - in particular the 2008 crash in the USA, and elsewhere, was caused by an increase in lending as a result of the huge increase in securitized bank loans. This had the interesting effect of increasing the amount of lending originating in the banking system (and then being moved outside it), without increasing the money supply. This also made it at the time, somewhat invisible, subsequently the US and other countries have introduced statistics on securitization that allow it to be tracked.

Generally speaking, changes that also increase the money supply will cause a much bigger price rise, than changes that only increase the amount of lending, but the entire system is significantly leveraged, leading to some highly non-linear impulse responses at times.

So if we look at the New Zealand figures:

It looks like the Money Supply flat lined following the 2008 crash for 3 years, and has now returned to something approximating its "normal" rate of expansion, which would explain the perception of a bubble. (What the normal rate of monetary expansion should be is an open research question.) It doesn't look like there are separate securitization statistics, and there probably isn't much loan securitization, but it's something to keep an eye on.

I'll direct you to wikipedia which has some pretty good information about it.

One of the important things about speculative bubbles is that they are very difficult to identify before they burst. It is very difficult to say the market is overvaluing an asset or a change in economic conditions have raised the true value. That said, there are some signs that a bubble is occurring. One of them being an increase in the demand for credit.

More a comment really, but rent can be misleading.

Just a quick example. On the demand side in Denmark you have various rent subsidies when your under a certain income level. For example if you have a installed kitchen, and under a quite high income bracket, you get a substantial subsidy. You also have a subsidy for the elderly, and quite a few more.

On the supply side you have regulation that is tied to how old the house/appartment is that your renting out. So, for example if I own a building that is older than 1990 there is an upper limit I can charge. This amount is in no way tied to the price I paid for the building. So, if you where to look at rents in the city I live in (which is an old city) you have entire neighbourhoods that would be misleading in terms of rental prices compared to what you would say would be a fair market price.

I addition to that tennets can complain - after they have agreed to a contract - and get a significant reduction, which is not based on market value of the house.

Not the answer you're looking for? Browse other questions tagged asset-pricing risk housing or ask your own question.

30
A law against selling any house cheaper than it was bought for, what consequences would that have?