The idea of the invisible hand could be expressed as: in a competitive market, agents acting selfishly in their own self interests will make choices that benefit others. There are innumerable popular articles that will describe why this is so but I am trying to find more academic literature, i.e. in peer reviewed journals that demonstrate this idea more rigorously, perhaps in the context of some simplified model economy and an agent's choice between multiple possible actions. I am not sure where to look and am concerned that "invisible hand" might not even be the correct key phrase to search - maybe such papers may express their results in terms of Pareto efficiency or some other language.

So my question is in several parts: Do such papers exist? And if so, would they express their results using the phrase "invisible hand", and if not, what other expression would they use.

Your description of an invisible hand is a straw man, and academic literature typically avoids straw man ideas.

Correction of misconceptions in the question:

Let me start by correcting some misconceptions

The idea of the invisible hand could be expressed as: in a competitive market, agents acting selfishly will make choices that benefit others.

That is not an expression of invisible hand idea it is a straw man of invisible hand. Academic literature, at least the high quality portion of it, does not examine straw mans of ideas (e.g. you would not expect serious climate paper to address straw mans like "if there is a climate change how is it possible there is a snow in a winter?").

First, Adam Smith used the metaphor invisible hand very sparingly, only 3 times in the whole corpus of his writing and only once in Wealth of Nation (WoN), which is the most relevant, where he states that:

But the annual revenue of every society is always precisely equal to the exchangeable value of the whole annual produce of its industry, or rather is precisely the same thing with that exchangeable value. As every individual, therefore, endeavours as much as he can, both to employ his capital in the support of domestic industry, and so to direct that industry that its produce maybe of the greatest value; every individual necessarily labours to render the annual revenue of the society as great as he can. He generally, indeed, neither intends to promote the public interest, nor knows how much he is promoting it. By preferring the support of domestic to that of foreign industry, he intends only his own security; and by directing that industry in such a manner as its produce may be of the greatest value, he intends only his own gain; and he is in this, as in many other cases, led by an invisible hand to promote an end which was no part of his intention.

Adam Smith never mentions selfishness here (nor self-interest), but person's own gain, i.e. in modern lingo that person is trying to maximize their own utility. What everyone's greatest gain is depends on their preferences and pursuing charitable activity fully qualifies.

Adam Smith does say also say in other passages of WoN that purely selfish activity can increase public welfare, but in those passages he does it to emphasize that that his claim does hold even if people would be selfish. No fair interpretation of Smith would say that he stated that it is selfish action in particular, that is required here. Rather any pursuit of one's self-interest (greatest value judged by one's own preferences) would qualify whether it is one that is selfish or not.

Third Adam Smith does not make claim that this necessarily increases welfare of others (there are other passages where he says it often does). In fact, Smith clearly states that because:

annual revenue of every society is always precisely equal to the exchangeable value of the whole annual produce of its industry ... As every individual, therefore, endeavours as much as he can, both to employ his capital in the support of domestic industry, and so to direct that industry that its produce maybe of the greatest value; every individual necessarily labours to render the annual revenue of the society as great as he can

In essence, Smith simply states here that the welfare/revenue of society is sum of individual welfare/revenue, that is $W = \sum_i w_i$, and thus if you maximize your own welfare you will contribute to the maximization of public welfare as well. But there is no requirement for your welfare improvements to also help others (although it could). For example, if one person gains but no-one else looses anything that counts as well as situations where one person gains, but other gain as a result as well.

The style of 18$^{\text{th}}$ century academic writing was less precise than we use at the present, and Adam Smith used the phrase "invisible hand" only 2 times in all of his published works, and 3 times if we count all of his unpublished works (Blaug 2008). Hence, there is a bit of ambiguity in the meaning of the term, but we can certainly exclude straw man interpretations such as made in the question.

Next the following few interpretations are the ones that are most widely accepted are:

You can see the original work on first fundamental theorems of welfare economics in Arrow (1951) and Debreu (1951).

The above interpretation is popular but a criticism of this interpretation is that it seems to read too much into Smith's work. First fundamental theorem of welfare economics requires perfect markets, no externalities and other assumptions that Smith was never explicitly discussing (see Berg 2008). Thus some economic historians would rather say that Smith was not describing fundamental welfare theorem.

This principle is much more wider that the one suggested in 1, and it is difficult to just recommend single paper. Technically the interpretation of first welfare theorem is an example, of beneficial social order emergence, so the same models can be used. The difference between this and the first interpretation is that this second one allows for much wider set of models and conditions than those of the first theorem of welfare economics. For example, classical Ricardian model of trade can be considered model of beneficial spontaneous order emerges as unintended consequence of individual action.

Invisible Hand is a metaphor wherein Adam Smith assumes that God causes human beings to benefit others when acting in their own self-interest. So it is the invisible hand of the designer or creator that brings about the beneficial outcomes. (This is my effort paraphrase Evensky page 200).

As modern economists, we use Adam Smith's "invisible hand" metaphor confident that we all know what it means in our discourse: it reflects our admiration for the elegant and smooth functioning of the market system as a coordinator of autonomous individual choices in an interdependent world. But in Adam Smith's moral philosophy, the invisible hand has a much broader responsibility: if individuals are to enjoy the fruits of a classical liberal society, the invisible hand must not only coordinate individuals' choices, it must shape the individuals into constructive social beings—ethical beings. Revisiting Smith's metaphor provides a valuable lesson: the foundation of success in creating a constructive classical liberal society lies in individuals' adherence to a common social ethics.

Smith's "invisible hand" metaphor reflects his view that he is representing the invisible connecting principles of the "immense machine of the universe" (Smith, 1976b, p. 236) that are the handiwork of the Deity. To fully appreciate the impact of this perspective on Smith's moral philosophy, however, one must bear in mind that Smith (1976b, p. 166) saw the Deity as not only handy, but also benevolent.

"The happiness of mankind, as well as of all other rational creatures, seems to have been the original purpose intended by the Author of nature, when he brought them into existence. No other end seems worthy of that supreme wisdom and divine benignity which we necessarily ascribe to him . . ."

Stiglitz, Joseph E., THE INVISIBLE HAND AND MODERN WELFARE ECONOMICS, NBER Working Paper No. 3641. This reference is available online via SSRN and NBER. It discusses the limits on the concept of the Invisible Hand in the context of theorems of modern welfare economics.

This paper reviews and puts into perspective recent work reassessing the first and second Fundamental Theorems of Welfare Economics. It assesses the implications of the Greenwald-Stiglitz theorem establishing the (constrained) Pareto inefficiency of market economies with imperfect information and incomplete markets as well as recent work on endogenous technological change. The information theoretic limitations to the Second Fundamental Theorem are also discussed, including the inability to separate out issues of equity and efficiency. The final sections of the paper consider the consequences of these problems for economic organization, economic policy, and the role of ideology in the belief in the Invisible Hand. 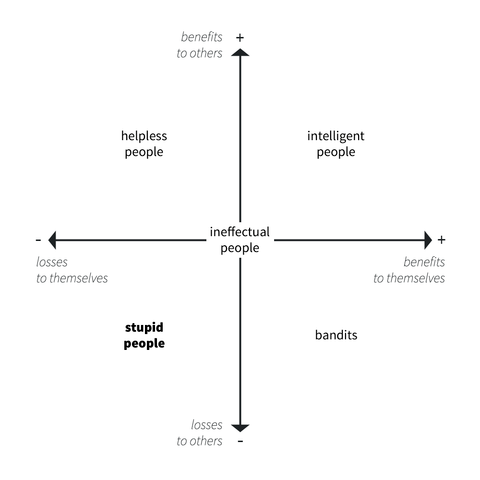 Pareto requires that no one is worse off (incurs loss) when the self or others become better off (benefit). So Pareto efficiency requires not only acting in the self-interest but the anticipation that self and/or others will be better off and no one will be worse off. A rational bandit might gain more than the loss to a victim but that would not be Pareto efficient because the victim is worse off to make the bandit better off.

Not the answer you're looking for? Browse other questions tagged pareto-efficiency adam-smith free-market or ask your own question.

1
Finding the Pareto optimal set with preferences for 3 individuals
1
Where did Adam Smith write the following and in what context?
1
Is it the most efficient to allow free transactions in financial markets?
1
In Smith's theory, what is the difference between the "nominal price" vs. "market price" and "real price" vs. "natural price"?
3
What does Adam Smith mean when he says wages are determined by: "advancing, stationary, or declining state of the society."
2
Prices in 'The Wealth of Nations'
1
Why does the prohibition of importing foreign goods mean that the industry should not exceed what it can maintain?