Why would a country ever want high interest rates?

The way I understand it, the government of a country can do a lot to change the interest rate in their country. Low interest rates encourage taking out loans and spending, thus boosting the economy, and a high interest rate discourages borrowing and thus slows economic growth.

But why would a country ever not want their economy to grow? Why not have the interest rate as low as possible all the time?

In addition, a government interested in smoothing out business cycles is interested not just in preventing deep recessions but also too rapid expansions. Hence when economy is expanding too rapidly government interesting in moderating business cycle needs to stabilize it by purposefully depressing economic activity, by increasing the interest rate.

To fully answer this question I will have to give you quick overview of 101 Macroeconomics.

Long-run AS is actually independent of price as it represents just the long run production capability of an economy.

For example, if an economy in a long-run has access to 100 units of labor, and if the society's production function, given technology it has access to, is given by

then the economy can produce at maximum 10 units of products, no matter what the interest rate is or what monetary policy government pursues.

Short-run AS depend does depend on aggregate price level in the economy, because in a short-run you could overwork your people, or overuse capital you have if the prices are sufficiently high. However, this is not sustainable in long-run (e.g. you might get away with forcing your workers to work overtime for few months but after some point overworking them will start affecting their health).

Now the equilibrium output produced by the economy depends in short-run on interaction between AD and short run AS.

Depending on where this intersection occurs economy could be operating below (usually in recession), at or above (usually in expansion) of its potential output given by long-run AS.

For example, below I have visualized situation where short run AD and AS intersect below potential output $Y^f$, so the equilibrium output is at $Y^*$: 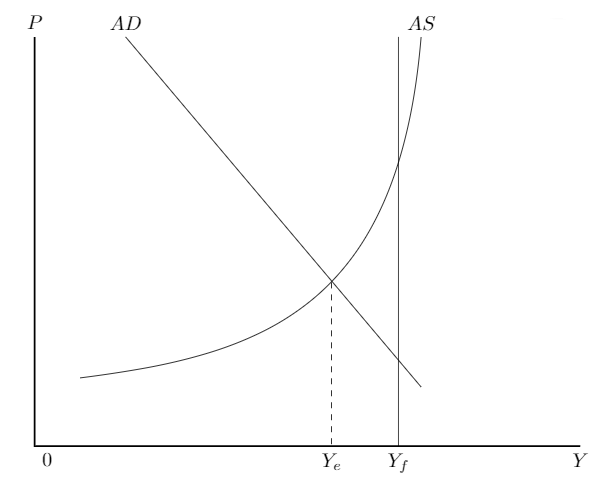 How interest rate can affect the equilibrium above

Now monetary policy (i.e. control over interest rate and money supply in the economy), can shift the aggregate demand to the left or right. Low interest rate would shift it to the right, because at lower interest rate people would be willing to spend more on consumption or investment spending ($AD = C+I+G +NX$ where $C$ is consumption, $I$ investment, $G$ gov spending and $NX$ net exports).

So in the case above, where the output is belong its long-run potential, government could help the economy by lowering the interest rates and shifting aggregate demand to the right. You can see that on the picture below. 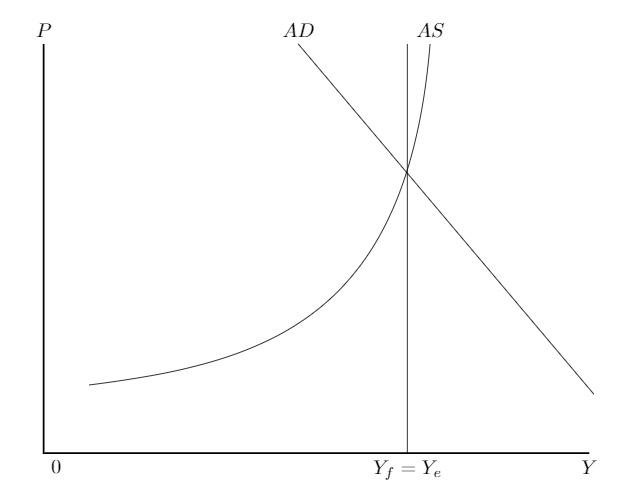 However, if government sets the too low aggregate demand can be pushed too far to the right. In that case, in a short run economy can still produce higher level of economic activity but this is not sustainable in long term and it does have other negative effects (e.g. this also leads to higher price level and thus high inflation that has some negative effects such as increasing uncertainty, shoe-leather costs, menu costs etc.). 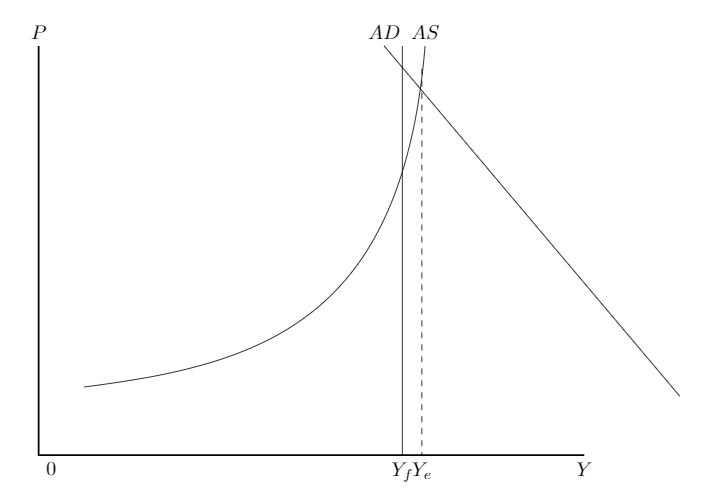 Now I will oversimplify here a bit, but in a nutshell, the current dominant thinking about monetary policy in economics is that it is government's job to mitigate booms and busts cycles, by using interest rates (and/or other monetary policy instruments as well as fiscal policy - but that is not discussed here), in a way that economy is always operating at its optimum, that is at a point where $Y_f=Y_e$ (of course realistically this is not easy to achieve, but this is the goal).

However, there is no way how government could by its policy permanently rise output above the potential output in the long run, since that is maximum what the economy can produce given its technological and resource constraints.

Moreover, even though economy could be in short-run artificially kept above its potential, this is not sustainable in long-run and has also several disadvantages so it is not like that higher output is some sort of free lunch.

As a consequence of the above, and given the current consensus about government's objectives when it comes to macroeconomic management, governments will try to pursue low interest rate when AD is such that it intersects short run AS below potential, and high interest rates when AD intersects AS above its potential.

Moreover, note that the interest rate at the point where $AD=SRAS=LRAS$ (SR= short-run, LR = long run) is not necessarily low interest rate. It is completely possible that interest rate at which economy operates at its maximum potential is lets say $10\%$, that depends on the parameters of the economy.

Not the answer you're looking for? Browse other questions tagged interest-rate nonexpert or ask your own question.