Why are the gas prices so high in the US and why does it depend on OPEC+?

I've been reading these days a lot of discussions between people on the internet concerning the hikes in gas prices. I then read many articles about this, and the opinions are really different, and they are highly affected by the political orientation of the experts and the publications. Can anyone help me understand why gas prices are too high in the U.S., a country that was once a leader in gas production and recently a net exporter?

The Republicans state that it is Biden's fault, whereas democrats blame it on the free market and on the fact that there are higher demands than production. So I tried to elucidate the topic by myself, but I would really appreciate it if someone could help me understand this issue, considering that I have no economics degree.

ADDITIONAL INFORMATION TO GUIDE MY QUESTION

I have formulated some sub-questions to help guide this issue:

By looking at a graph on the EIA website, one can clearly see that in 2020, the consumption of petroleum products will decrease significantly. At one point, the production was higher than consumption and the exports higher than imports, so that makes sense that the gas prices dropped significantly, correct? 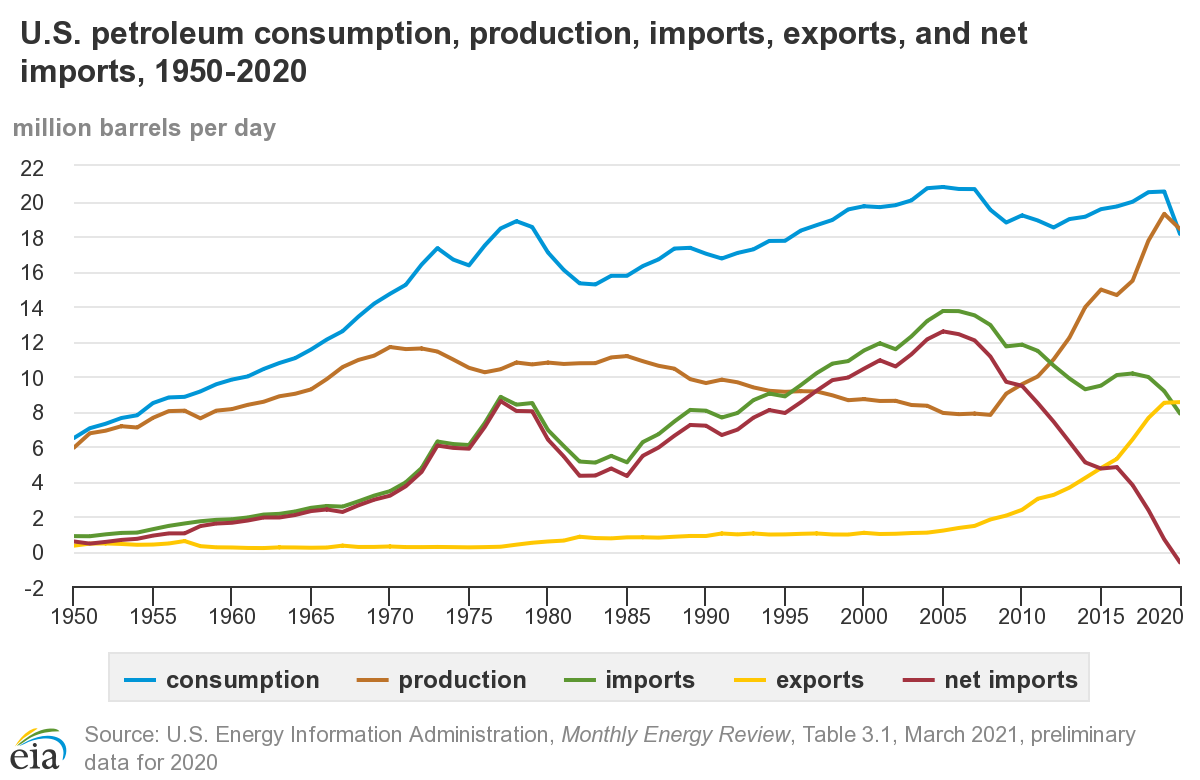 2. What triggered the increase in gas prices?

As the economy recovered and more people returned to "normal," there was more demand, correct? Another graph can clearly show that the gas price started increasing as things returned to normality, with a massive change in the slope in November 2020. The gas prices have continued to go up since November. 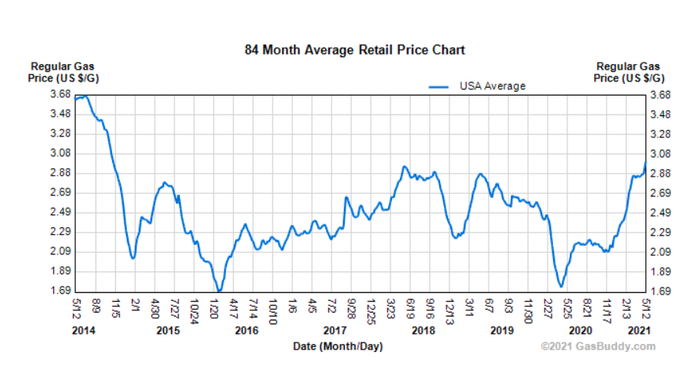 3. Why did the gas price increase so much?

Here is when things start to get blurry to me. Why did the price increase so much? If it is a free market issue, how is it possible that there is a higher demand than production? In the end, the oil companies had all the equipment needed to produce at least as much as they did before the pandemic. This drop-in production can be seen in this graph: 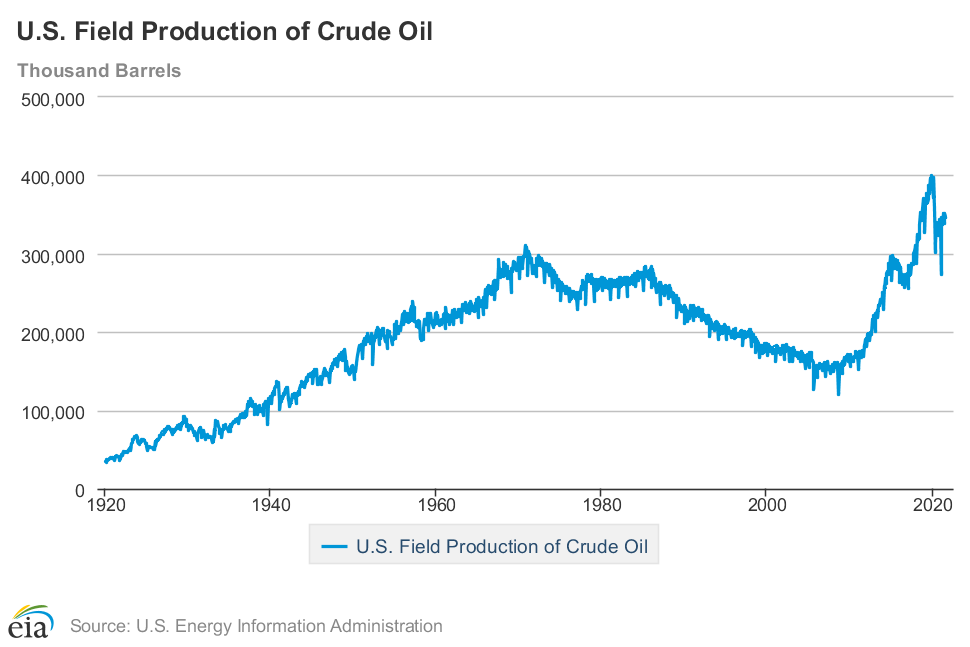 With some hand calculations, one can see that the production dropped by 13.7% (between Dec 2019 and June 2021). The supply, for example, reached pretty much the same rates pre-pandemic. 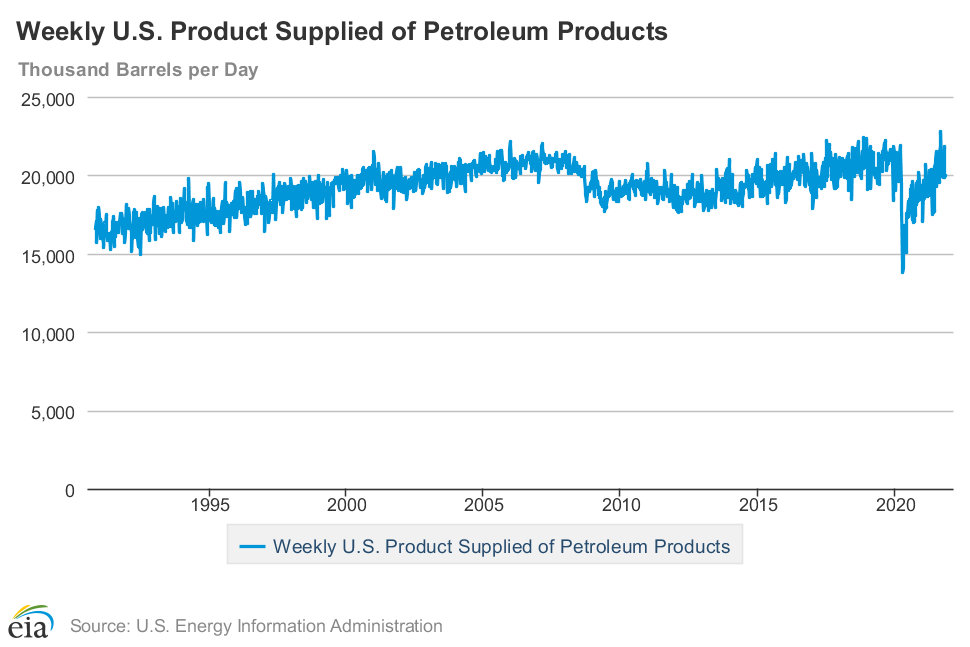 At this point, one can say that there is lower production and the same amount of demand. Is this an indicator of why the gas prices hiked so much? If this is true, then there is another indicator that breaks this logic.

4. If there is less production than supply and demand, how come the U.S. still exports petroleum products? The graph below shows that the U.S. exported more petroleum than it imported in 2021 (see article here)

Naturally, this detail breaks the logic and leads to believe that it is in fact a matter of politics as well, but is it? Today, U.S. Energy Secretary Jennifer Granholm said that the oil is a global market "controlled by a cartel, the cartel is called OPEC." and that the President cannot push companies to supply more oil.

And here is where I close the loop and connect all the questions. How can a country with net exports, with a high production of petroleum products, and with the capacity to pump at least as much more oil as it uses can use depend on OPEC+ and have gas prices way higher than pre-pandemic months? Can anyone please help me understand why the prices are so high today?

Note: please keep in mind that these questions come from a person with no economics degree, so I apologise in advance if there are logical errors.

Correction of Some Misconceptions in the Question

First of all, on any market where prices are not fixed, price always depends on demand and supply. However, government policies can affect supply and demand. For example, if government of a country that produces oil implements policy that forces to close all its oil fields that would clearly create a negative supply shock which would affect gas prices that people face. Just because this supply shock originated as a result of government policy that does not mean price was not determined by market supply and demand on the market for gas. Consequently, even if Biden's policy would be responsible it would be completely fair to say that this is 'free market issue' (even though I would not characterize it as an issue as that is how free markets are supposed to work), since market demand and supply are always directly or indirectly affected by government policies (unless the policy would directly set price or quantity on market for gas when one could say that this is centrally planed market not free market).

Free market as defined in economics as a system where quantity and price are self regulated by market. Gas market itself can be completely free of any government interference, but if government for example prohibits sale of gas-guzzlers, it would affect oil demand (since gas is created from refined oil and thus gas and by extension oil are complements to car sales) and market price on oil market, fully determined by free market, would be affected by this demand shift, no matter that the demand shift was caused by government policy.

Second of all, you make mistake of looking at US solely. Oil prices are determined by world markets, even if in US demand for oil would be low and supply of oil would be high, if there is large world demand for oil the price of oil will be high, even in US where demand might be low.

This because of law of one price. A homogenous commodity must have the same price everywhere (after accounting for local taxes, transportation costs etc). If for example price of one liter of oil would be \$5 dollars in the US but \$10 in the Europe, and transporting one liter of oil to Europe from US would cost \$1, then everyone from Europe would just buy oil in US and transport it to Europe, until the demand in the US (because of Europeans) would be sufficiently large to push US price to be \$9 (in my example, there would still be \$1 discrepancy because of transportation costs which make US oil cost \$10 to an European).

How OPEC Affects Price of Oil.

OPEC is cartel, cartels are organizations where independent producers join together to work in unison (see Mankiw Principles of Economics pp 339), typically to control supply of their product so they can increase their profits thanks to higher prices where supply is limited.

It is worth noting though that the effect of OPEC might not be constant, since sometimes it might be hard to enforce the production quotas on members since there is incentive to cheat. Moreover, oil production from non-OPEC countries matter significantly. For example, the US fracking and shale oil revolution that occurred about decade ago lead both to the fall of oil prices and disruption of the OPEC, since USA is not member of the cartel (See Mankiw and Taylor Economics pp 55).

Nonetheless, the above being said, it is true that if OPEC did not exist the price of oil on world markets would be lower.

How did it start? What triggered the increase in gas prices?

It is almost certainly due to combination of demand and supply shocks on world oil markets. As the graph from Global Energy Statistical Yearbook 2021 below shows in 2020 there was sharp decline in world's oil production (the production fell by over 6.1%). The 2021 data are not yet in, monthly data show that there was some recovery of oil production in 2021 but still the production is far cry from its 2019 levels.

On demand side, not just US but whole world is recovering from the covid-19 recession, so demand for oil quickly surges everywhere (e.g. see Statista statistics and projections), and as explained in previous sections it is global supply and demand that matters because of the law of one price.

Why did the gas price increase so much?

Without allowing for some passage of time to gather data and do research on what happened to various variables in 2021 one can't say much more than just simply state the world supply and demand simply intersected at this much higher price.

If there is less production than supply and demand, how come the U.S. still exports petroleum products?

Because of the law of one price it does not matter that USA is net exporter. USA could have massive oil imports and US oil price could be low, or US could be the world's major oil exporters and oil price could be high. What matters is total world supply and demand of oil. US can affect oil price only to the extent it can affect world oil supply or demand.

However, Biden's policy can affect US supply of oil, and US is actually literally the world's biggest oil producer (see Worldmeter). Moreover, Biden did make some policies that restrict oil production. According to Center for Strategic and International Studies:

In a January 27 executive order that introduced a sweeping, government-wide approach to climate policy, Biden announced several new oil and gas policies. The Biden administration is halting new oil and gas leasing on federal onshore lands and offshore waters “to the extent consistent with applicable law.” This pause will not affect existing operations or permits for existing leases, and private lands will not be affected. The Department of the Interior states that Native American tribal lands will be exempted. Biden has also directed the secretary of the interior to consider whether to adjust coal, oil, and gas royalties in order to account for corresponding climate costs, suggesting the possibility of a royalty increase. Biden ordered the Department of the Interior to take steps toward conserving 30 percent of public lands and waters by 2030 and toward doubling offshore wind production in the same timeframe. These moves follow executive orders that halted implementation of a leasing program in the Arctic National Wildlife Refuge and effectively suspended new leases, contracts, or drilling permits for at least 60 days. Biden’s January 20 executive order also withdrew the permit for the Keystone XL pipeline and directed agencies to consider new rules to curb methane emissions from oil and gas. Last, Biden has directed government agencies to work toward eliminating fossil fuel subsidies by fiscal year 2022.

It is completely reasonable to assume this could have some non-trivial effect on world oil prices given the US dominant position as the world's largest oil producer. However, without any deep econometric analysis it is impossible to put an exact numbers on it.

Not the answer you're looking for? Browse other questions tagged inflation supply-and-demand price oil or ask your own question.

7
What is the impact of fracking on oil prices?
8
What benefits do OPEC countries obtain by cutting oil supply?
12
What is the reasoning behind the sharp fall of oil prices starting in mid 2014?
4
Why is oil price increasing in May 2016
0
Saudi Arabia motivations for OPEC production cut
1
Crude oil price changing factors
0
Why could boasting oil during the current drop in oil demand be good for Saudi Arabia?
1
Does countries building gas plants result in rising gas prices?