Is this really a valid description of AS&AD after lockdown? 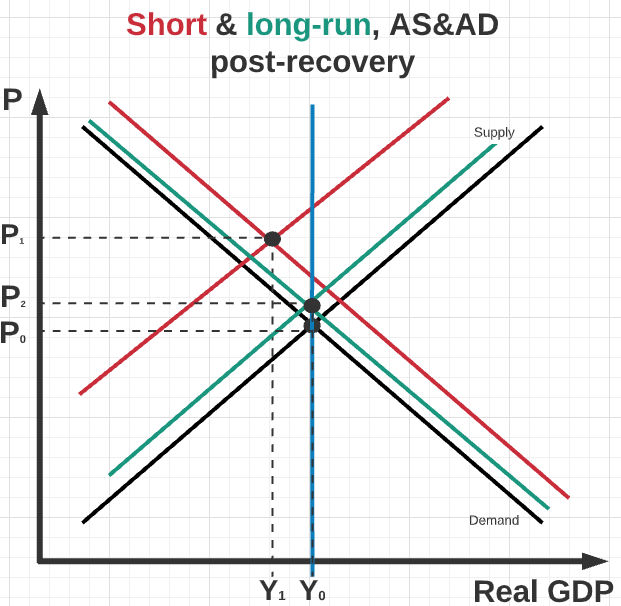 I understand that in the short run AS decreased (supply chains) and AD increased (stimulus, post-lockdown behaviour). But what's up with the lines in the long-run?

Also is this even a valid way of showing AS & AD? I've never seen classical models like this.

I understand that in the short run AS decreased (supply chains) and AD increased (stimulus, post-lockdown behaviour). But what's up with the lines in the long-run?

The image is hard to read because everything is crammed together and not properly labeled, but it seems to be perfectly fine description of an Covid19 lockdown effects using AS-AD. Graph shows the following 3 steps:

Also is this even a valid way of showing AS & AD?

Yes, what other way of representing AS & AD did you ever seen? This is the most common representation of the AS & AD model that you will find in literally any good 101 macro textbook (e.g. see Mankiw Macroeconomics, Blanchard et Macroeconomics: European Perspectives, Krugman & Wells Macroeconomics).

The model is not classical model, it is Keynesian model, but Keynesian (respectively New Keynesian) and Neo-clasical synthesis (i.e. New Keynesian models with classical micro foundations) models dominated macro ever since publication of the General Theory by Keynes and you would find this AS-AD model in all major macro textbooks in last 70 years or so. If you google AS-AD and select show images then virtually all results will look like this.

Not the answer you're looking for? Browse other questions tagged macroeconomics general-equilibrium classical-economics or ask your own question.

0
Short run Aggregate supply curve is horizontal or positively sloped?
0
How will economy find long-term equilibrium in AD-AS model in case of a negative supply shock?
1
Transparent Fractional-reserve banking as an alternative to the current system
37
Why do we need to "get the economy moving again"?
2
Why don't suppliers increase price after a positive demand shock?
1
Question about the Law of Supply
3
Do open market operations permanently increase the money supply?
1
long run growth of money supply