Wages are lower than 30 years ago in Italy, why?

Recently I've seen some statistics about wage growth in the European Union in the last 30 years and surprisingly, Italy is the only country with a negative value. So, what is the root of this problem? And how should Italy try to solve the issue?

Some economists argue that since inside the Eurozone the country can't devalue its currency like it was done with the Italian Lira, to regain competitiveness the only remaining tool is to cut wages, as reducing taxes is impossible due to the government budget deficit rules imposed by the EU and the high public debt. Others say that employees are too few skilled. What is true about these statements? 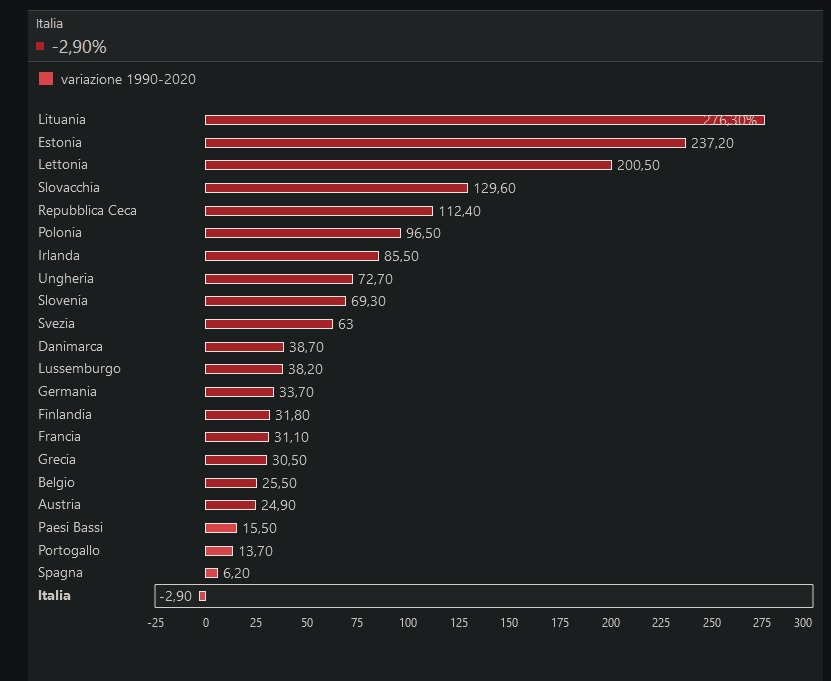 Source of the plot: https://europa.today.it/lavoro/italiani-stipendi-inferiori-1990.html

Edit: the data on the plot probably come from OECD https://data.oecd.org/chart/6wIK

There are several reasons for this.

First, the wages are typically highly correlated with labor productivity (Strauss and Wohar, 2004). This should make intuitive sense, since marginal labor productivity ultimately should determine the wage in competitive markets. If an employee produces 1000 euro worth of product every month profit maximizing employer would not want to employ that person for wage larger than 1000 euro.

Now, real world markets are often imperfect, so as Strauss and Wohar (2004) show in their cross-country empirical estimation relationship between wages and productivity, typically productivity grows faster than wages. Nonetheless, the fact remains that wages are highly correlated with labor productivity, even though the increases in labor productivity are associated with less than unity increase in real wages.

Consequently, one would not even expect real wages to increase in the Italy over last 30 years.

However, in Italy total factor productivity actually declined between 1990s and now. Given this it is actually not a puzzle that the wages in Italy are stagnant (it would be more surprising if they were increasing).

Italy has a competitiveness problems (as demonstrated above). When a country is unproductive it can only stay competitive by either offering lower wages, or pursuing more loose monetary policy that let's exchange rate depreciate.

Now both of these strategies reduce purchasing power of the worker, but typically the second strategy is not as punishing as the first one.

However, once Italy adopted euro, it essentially locked itself into fixed exchange rate regime with all other Euro-zone members. Given that many other Euro-zone counties like Germany, are getting more and more productive over time, without flexible exchange rate the only thing that Italy can do is to suppress its wages.

Italy's fiscal policy is very restrained. This on one hand is not surprising given the enormous level of debt that Italy has (which reduces its fiscal space). Italy still has the largest debt in the euro-zone even though covid-19 made some Euro-zone countries to almost catch up with the Italy. In addition, due to euro, Italy cannot easily just monetize this debt (at a cost of inflation) because they do not anymore control the monetary policy.

However, fiscal restraints tends to suppress economic activity which further supresses wages. As you can see from OECD data Italy's spending as % of GDP contracted.

Now to be clear, I am not making here any judgements. One can debate whether this restraint was necessary because Italy's public finances are unsustainable and government was spending already too much or that it was self-inflicted unnecessary wound because maybe Italy's economy has primarily aggregate demand problems not supply ones. However, from macroeconomic perspective a fiscal contraction will shift aggregate demand to the left and put downward pressure on prices (as well as increase unemployment) in the short run. 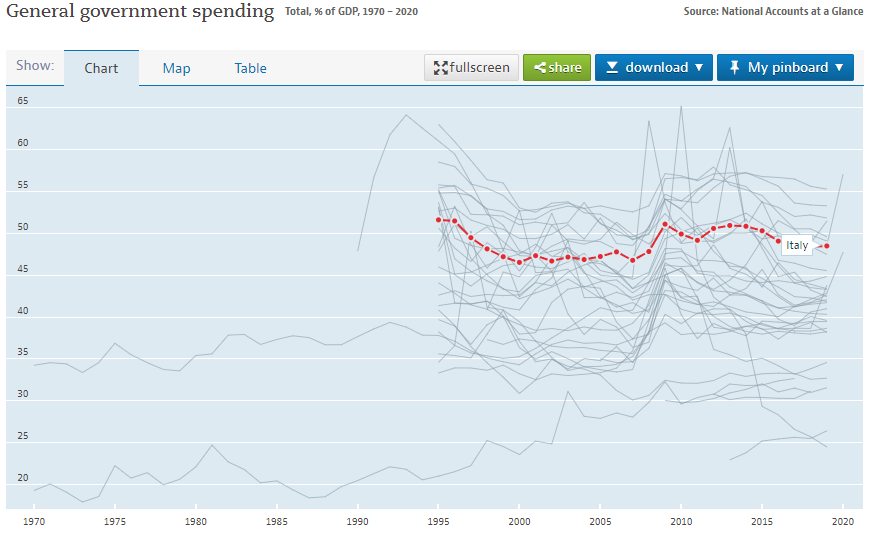 I believe the 4 points above should be able to explain most of the real wage decline in Italy.

Not the answer you're looking for? Browse other questions tagged macroeconomics labor-economics wages euro-area human-capital or ask your own question.

8
Why some countries are wealthier than others?
19
Why are real median household incomes stagnant?
31
Why do celebrities get high wages?
3
How to adjust salaries of more than two countries to a common year given that the data was collected in different years?
3
Are real wages a good measure of economic progress?
1
Why does trade depress relative wages?
18
Why do wages not equalize across space?