I looked up financial contagion in Wikipedia and noticed there wasn't a single mention of money supply.

EDIT: The reason I am concerned that the required measures may reduce the money supply is because perhaps the most obvious thing a bank could do is simply cease (or reduce) its lending and wait for its balance sheet to gradually shrink (shrinking the money supply) as outstanding loans get paid back. Is this the action a regulator would expect? Or would they demand some more rapid response?

It might help you to think of the liabilities and equity portion of a bank's balance sheet as an answer to the question: Where did the funds come from to purchase the bank's assets? The common stock stays at the issued value because a bank doesn't receive any funds when its stock price rises unless it issues new shares.

Banks do need to recapitalize when their assets (loans they make) change in value because these are recorded at their fair market value (maybe by mistake you called these assets capital).

Financial contagion occurs when shocks spread from one country to another. There is no reason why situation you describe should affect other countries, with other currencies. Exchange rate would adjust to changes in money supply.

It could create a loop where it would affect other banks in the same country if the bank is so big that when it sells its assets it affects their price. However, these loops/multipliers do not have infinite effect, their effect declines over each iteration. The value at which it would stabilize would depend on parameters of the problem (capital requirements and so on).

The Reserves for loan losses, or loan loss reserve (LLR), is a contra-asset. Note carefully the Reserves for loan losses is just an accounting "trick" that sets aside some equity in anticipation of the write-off of bad loans. If the bank writes down some bad loans against the allowance for loan losses then it writes down some of its paid-in equity and/or adjusted equity (retained earnings) without having to recapitalize. This expected write-off of a small amount of bad loans does not directly reduce deposits in the M2 money supply. It also does not impact the insured, secured, or uninsured liabilities issued by the bank or bank sector.

During the years prior to the global financial crisis (GFC) in 2008 some large US banks would originate new loans which would initially increase levels of deposits in the money supply. The banks would package many loans into synthetic securities then sell those securities to non-bank affiliate holding companies. The subsequent sales of loans would reduce assets of banks and also reduce the deposits in the money supply because the non-bank purchasers pay the banks via the cancellation of deposits. The banks would earn fees which would increase profits which would then increase adjusted equity also known as retained earnings of the banks. There would be an increase of equity via retained earnings, with no corresponding increase of the money supply, compared to a system where banks are forced by regulations to originate and hold loans on their own balance sheet.

The question: "How do banks restore capital adequacy ratios in the event of a fall in the value of their capital? And in particular do the required actions shrink the money supply?" 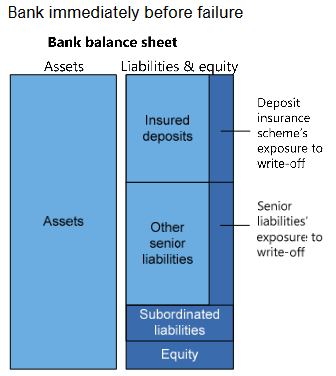 The balance sheet illustration above shows no distinction between good and bad assets. It shows the anticipated loss allocated to investors holding equity, subordinated liabilities, senior liabilities exposed to write-off, and deposit insurance scheme's exposure to write-off. This means a decrease of assets, for bad loans in the asset portfolio, will be accompanied by a decrease of liabilities and equity, to write-off all the bad loans. The write-off of uninsured deposits or uninsured senior liabilities may overlap the measures of the money supply. Then money supply would be reduced via the write-off of bad loans.

Can the bank recapitalize? To do so it must get all the bad loans off its books and then raise new equity. The sources of new equity are retained profit and paid-in equity. There will be no retained profit for a bank taking a write-off so this is not a source of new equity. There will be no market incentive to provide new paid-in equity until the bank gets the bad loans off its books so the bank can only recapitalize by allocating the loss to some investors or by putting the loss onto the government bailout scheme(s).

Notes on the Global Financial Crisis

During the global financial crisis of 2008 the analysis of impacts on the money supply and bank recapitalization (loss allocation) effort was complicated because many regulated large banks had so-called off balance sheet liabilities. These were obligations to purchase bad loans that were previously packaged and sold to non-bank affiliates. A large volume purchase of bad loans in a short time would create a shortage of cash (central bank reserves) on the aggregate bank balance sheet and would cause the bank sector to purchase bad loans into their asset portfolio and issue new deposits to the non-bank sector.

If the banks sold good loans to non-banks to purchase bad loans then they could swap good loans for bad loans without causing a net increase of the money supply and perhaps without causing the central bank to provide a persistent increase in reserve funds. However that would degrade the quality of capital in the affected banks within the aggregate bank sector.

During late 2008 the volume of bank borrowing from the Federal Reserve went up rapidly showing the demand for more reserves:

In this context the money supply would increase rapidly if the bank sector purchases bad loans in large volume from the non-bank sector. However, at the same time, investors in the non-bank sector were reluctant to provide new paid-in equity or to hold the uninsured liabilities of banks. The haircut rate on low quality repo borrowing increases which reduced the volume of repo banks could issue as alternative to deposits. Later in 2008 and during early 2009 the federal government drastically increased levels of deposit insurance, the Treasury agreed to put equity into the large banks as necessary whether they wanted it or not, and the central bank (Fed) switched from providing reserves via discount loans, which add no deposits to the aggregate bank, to quantitative easing or large scale asset purchases, where LSAP with a non-bank counterparty puts reserves and deposits into the aggregate bank balance sheet.

The idea that a bank can recapitalize is an oxymoron. Either the bad loan loss must be allocated to some investor(s) or the government provides a bailout. The impacts on money supply are complex but definitely if banks are forced to sell good loans to non-banks, and then write-off bad loans, it will decrease the money supply and harm the quality of bank capital.

Not the answer you're looking for? Browse other questions tagged money-supply banking or ask your own question.

4
If all Banks in the world are emptied..?
6
How does the money supply behave when bank loans are repaid?
2
Why do banks need to write-off the debt against Shareholders capital invested
4
How often do banks borrow from the Federal Reserve?
0
Solvency and liquidity. How to understand them? Should Central Banks only lend to solvent but illiquid banks?
2
If banks create money by lending it out, how are they taking any risk?
1
What are the costs of requiring banks to have more equity?
2
How important are capital requirements for controlling broad money supply?
1
How leveraged are banks in the United States?