Is there sound economic reasoning behind the assertion that automation will not lead to mass unemployment?

Many people are optimistic that for every job eliminated by automation, new jobs will be created so that people will always find work that pays them a reasonable wage. Is there sound economic reasoning behind this or is it just blind optimism?

By the way, I am taking about 50 or 100 years from now when we would expect technology to be able to automate 95% of today's jobs.

I have often seen the argument that loss of jobs in agriculture and later in manufacturing were replaced by jobs in service industries. The reasoning is that if something happens twice, it must continue to happen for ever.

Human labor is a resource. The laws of supply and demand say that a drop in demand will result in a drop in price. The decline in price leads to a reduction in quantity of labor hours supplied.

Is there a theory that says that for some resources, demand will always rise to meet supply? The only case I can imagine, is when there is a latent demand ( or shortage ) of a resource.

Say’s Law says “supply creates its own demand”. In the long term Say's Law will apply. In the short term a surprise will mean some suppliers are producing something they should not be and it takes time to adapt so there can be temporary unemployment. When it is widespread, that is a recession.

In a highly automated world if a person works what we now consider to be part-time, they still have 1 job so jobs per person might not be the best measure for showing the effects of automation. This suggests we should consider not only the unemployment rate. I consider leisure and absence from the labour force.

As technology driven productivity increases, people can accept a mix of more income and more leisure. These are substitutable so we would expect both to increase in certain proportions, which is what occurred in the past. In the future both will increase in unknown proportions.

A historical change under the circumstance of a technology driven increase in economic productivity is more years young people spent not working while enrolled in an “education” system that increases subsequent productivity but also seems to wastes peoples’ time. Productivity increases can make this possible if parents and taxpayers transfer an increasing amount of their output to young people.

This graph of the percentage of the population with college attainment indirectly suggests that years spent in education has increased since 1940. 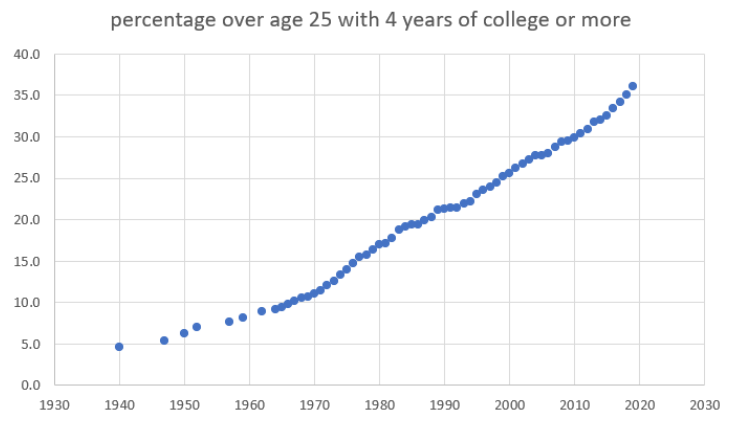 Consider also the historical increase in the number of leisure years between initial retirement and the end of life. At the following link is information on the number of years spent in retirement. It shows that in the U.S. it increased from 11.3 or 15.0 (depending upon gender) in 1970 to 16.4 or 19.8 in 2018.

Link to years in retirement data

Reference for the 1.3% figure

Lastly, I offer this graph to justify my earlier claim that income increased. More leisure (early in life, late in life, in the week) was part of a mix that included more real income.

6
Are there any studies that show that "Affirmative Action" hurts the economy?
2
Due to rising costs of college tuition, is it likely that the future will have less universities and the remaining only for those of much wealth?
4
How does economic theory handle full automation of production resulting in full unemployment?
1
Theoretical/Empirical Arguments for Migrant Workers in the US
0
Is there contradiction between automation created resilience and the full employment (with high wages)?
2
Why if the economy will produces too much there will be an increase of prices in nearly all goods and services?
1
Does savings always equal investment? Are there any cases where savings could be removed from the economic system altogether and break the balance?
5
Are there any general rules that can be used to assess the consequences of a significant minimum wage increase in a country's economy?