How are GME prices still so high?

My naive models of how stocks are valued are by the relationship (number of stocks that exist) * (price of stock) = total value of company. This squares intuitively with my naive models of stocks themselves, i.e. that owning one of N shares is like "owning 1/N of the company".

Now let's consider GameStop. For one reason or another, its prices surged at the end of January 2021. It's now been almost 11 months since then, and though it's nowhere near the peak price (\$483 according to this) it still seems much, much higher than it should be -- I'd expect to have fallen to around the $20 that it was for 4 years pre-2021, but it's still well over \$100. Assuming that GameStop didn't do anything for it to suddenly gain value, how is this possible? In other words, why aren't people ("actual" traders, not my uninformed parents) noticing that owning their share of the company is worth way less than what they paid for it?

A potential answer is that the bubble just hasn't burst yet, and the stock is expected to really crash sooner or later. This is somewhat unsatisfactory because my current perception (could be wrong!) of what people think about GameStop is that the whole thing's blown over, no one's doing anything crazy anymore, etc. If this is the route your answer takes, it would be nice if this is addressed. 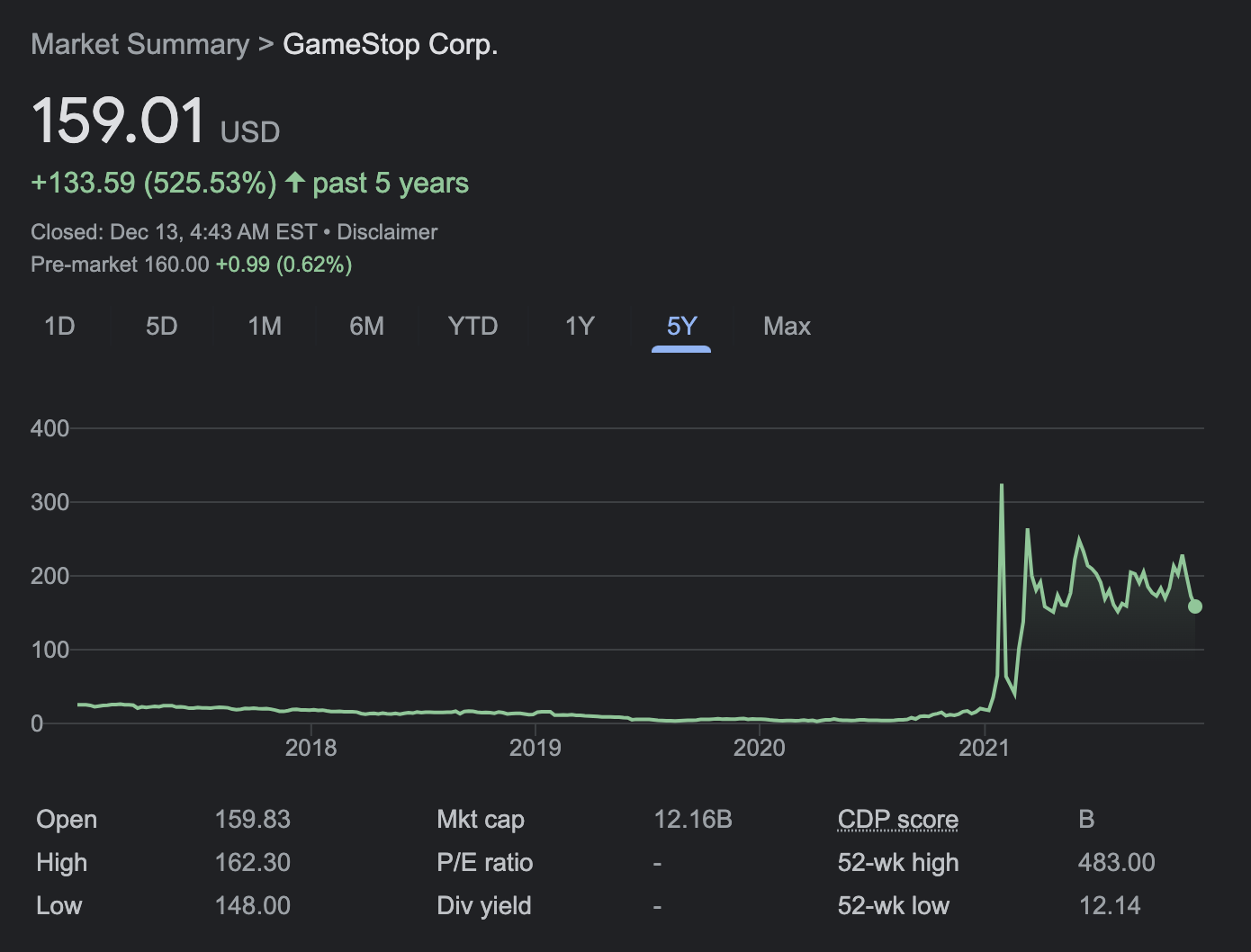 The first order answer is that many people have bought the stock and only sell at extremely high asking prices. Therefore, for those who wish to buy, the price is high.

Why? The current shareholders anticipate more shares need to be purchased (because of short selling). They could be right, that remains to be seen.

Others are holding on as a form of protest/demonstration and solidarity. The rallying cry is "Apes together strong". The idea is that small scale investors in large groups can trigger change.

Very few argue that Gamestop fundamentals are good enough to warrant this particular evaluation (many say it is good, and it could be good - but probably not THIS good). They are in the minority.

Not the answer you're looking for? Browse other questions tagged stock-market or ask your own question.

3
Clarifying the meaning of market capitalization
1
How are final stock prices arrived at?
0
Why are US equity prices and inflation inversely correlated?
1
Are equity prices and stock prices the same?
1
Is there any source talking about some stock behave similar to Gamestop from 12/2020 to 2/2021?
3
Are stocks prices included in GDP?