The impact of finance in the basic macroeconomic model

However, imagine if the government now prints $\\\$10$ each period and gives them directly to people, and people just keep them. Then, the financial income people have has increased, but the “savings rate” stays the same. However, what we actually think of savings rate in normal life has increased and it would be $75\%$.

Or what if the capital appreciates over time (or just once, eg if a risky investment was successful). This will, again, lead to an increase in financial income, but to no change in the savings rate in the sense of $S/Y$.

People, obviously, don’t care whether the income they get is from financial or real sources, money is fungible. This would imply that MPS is irrelevant. What am I missing?

I'll answer two question using a three sectors economy model (banking, household, production): a) What's the impact of changes in the MPS? b) What's the impact of investment return on output and income? For now, I'll only look at the short run model since I believe it is enough to answer you question stated above.

In this simple model economy, you have three main sectors: households, production, and banking. Each of them can be described by a set of accounts where income equal expenditure. For the household sector, income is composed wages and investment returns. This in turn is transformed into expenditure, through consumption and savings.

As for the production sector, income will be equal to consumption and investment. This in turn is transformed into wages, depreciation payments, and interest payments.

The investment demand of businesses comes from previous economic output, and indicate that entrepreneurs increase their investment in growth period, and decrease investment during difficult times. Investment also provide liquidity for depreciation expenses:

Finally, it is assumed that banks act as simple financial intermediate, transforming savings into loans such that:

a) So what happens if we change the MPS? To answer this question, we'll need to expend the output function, making it a function of available income:

So, an increase in the MPS would reduce output in the very short run. This would however be followed by a partial compensation through interest returns (see figure bellow). 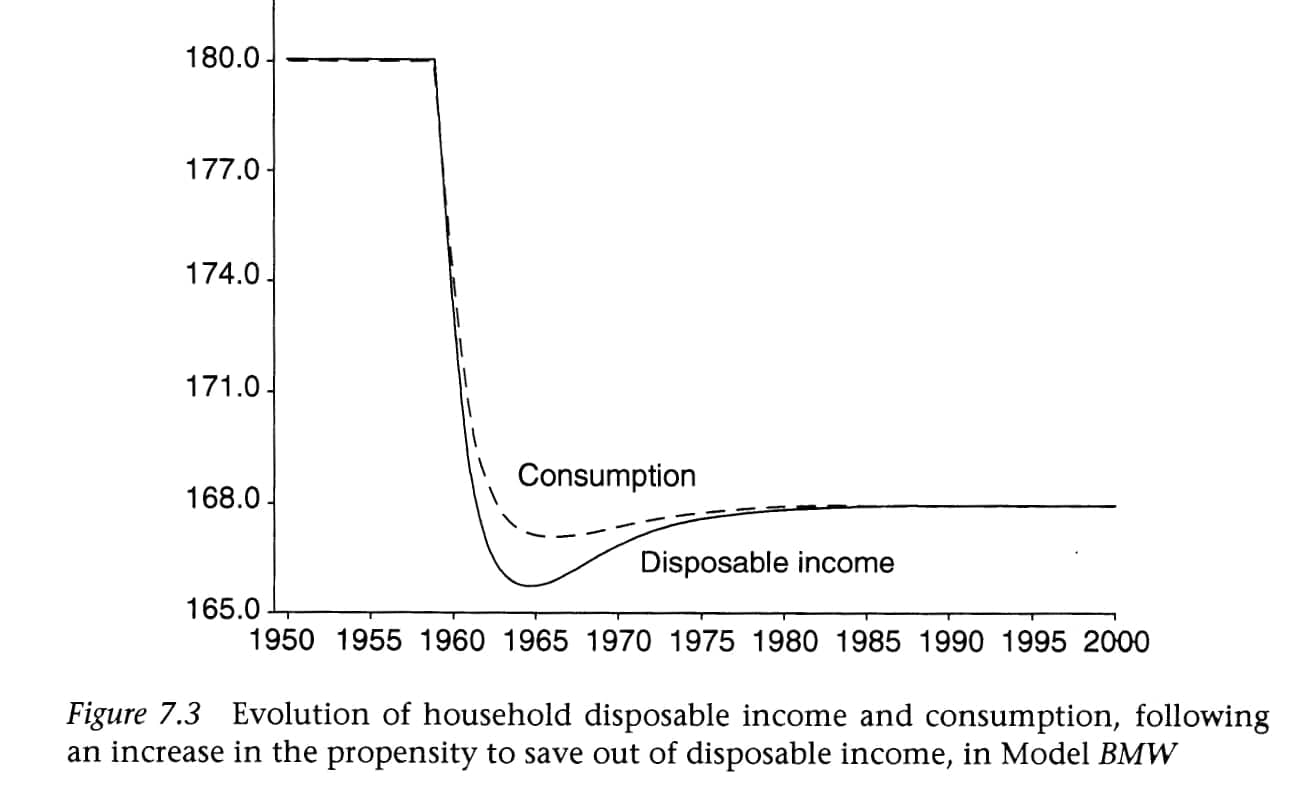 b) Our second question is concerning the impact of investment returns on output. In this model, investment returns have no impact on short or long term output. This is because any changes in interest returns will be compensated by an immediate change in wages. However, interest rates become significant when we assume a different propensity to consume for wage and interest income. If the MPC is higher for wages, then any decrease in interest rate would increase short and long term output.

My post is entirely based on chapter 7 of Monetary economics by Marc Lavoie and Wynne Godley. I would encourage you to read it if you want more information, it's a pretty good book. My figure is also from this book.

Not the answer you're looking for? Browse other questions tagged macroeconomics nonexpert or ask your own question.

0
Logic Fallacy in a single government purchase creates infinite GDP?
2
How does inflation work in real life?
5
A question about savings and investments
1
LM curve: How interest rate is changing without OMOs by the central bank?
1
Basic question on S=I
1
How does the GDP multiplier work?
1
Where does investment originate from in the circular flow model?
2
Why doesn't national savings, in aggregate, always equal to zero in monetary terms?
1
Is Khan Academy wrong about inflation?