What does a currency say about an economy and how to compare them?

I have a pretty basic question about comparing currencies. But I just need to have this cleared up because I can't wrap my head around it.

When I want to know for example which currency is stronger, for example the Euro vs NOK, I just look up how much NOK I could buy with €1.

€1 is approx. 10 NOK at the time of writing. So this means that the Euro is a stronger currency and worth more than the NOK? Because I'd need 10 coins of NOK just to trade one coin of Euro.

But what exactly does this mean? What does this say about the economies using the currencies? I've been to Norway and it is an extremely nice, prosperous and I'd even say wealthy country. Then why is its currency ten times lower than the Euro?

Is it just because there is more demand for Euro? Is a weak currency necessary a disadvantage for the economy using that currency? Why would Norway (or Poland if you want to compare EU-countries) not switch to Euro when Euro is a stronger currency?

This concept is not really clear for me. Thanks.

TL;DR: What does a weak currency say about the economy using that currency. And is a low currency always a disadvantage?

Suppose for example 1 JPY currently has the value of 0.0088 USD. If currency markets are large, liquid, and low cost, JPY and USD are interchangeable so you are indifferent between 1 JPY and 0.0088 USD. If a commentator says one currency is undervalued compared to another you are not indifferent to where you spend currency to make purchases. For example if a commentator were to say the USD is now undervalued compared to JPY it means, for example, 10 m JPY buys a worse "basket" of goods and services in Japan than 88 k USD in the U.S. or equivalently 88 k USD buys a better basket in the U.S. than 10 m JPY does in Japan. This is the same as saying JPY is overvalued at a rate of 0.0088 USD per JPY. This is the same as saying USD is undervalued at a rate of 114 JPY per USD.

The JPY has a low value compared to the USD because it is worth 0.0088 USD. The GBP has a high value compared to the USD because it's worth 1.32 USD. These values do not necessarily have anything to do with "prosperity" as measured by per capita GDP. The U.S. has a higher per capita GDP than a country that has a lower valued currency (Japan) and simultaneously a country that has a higher valued currency (U.K.).

Changes in a period of time and its relationship with per capita GDP...

2 data series from Argentina are presented. 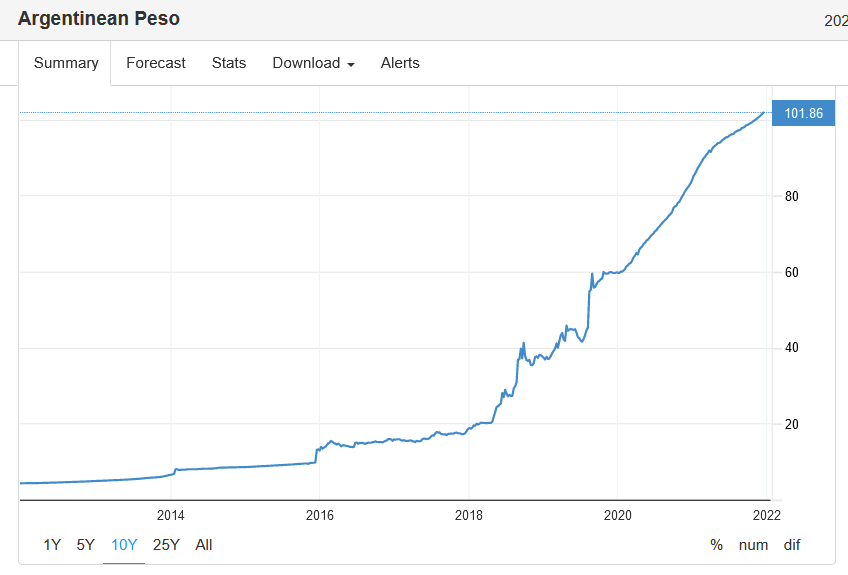 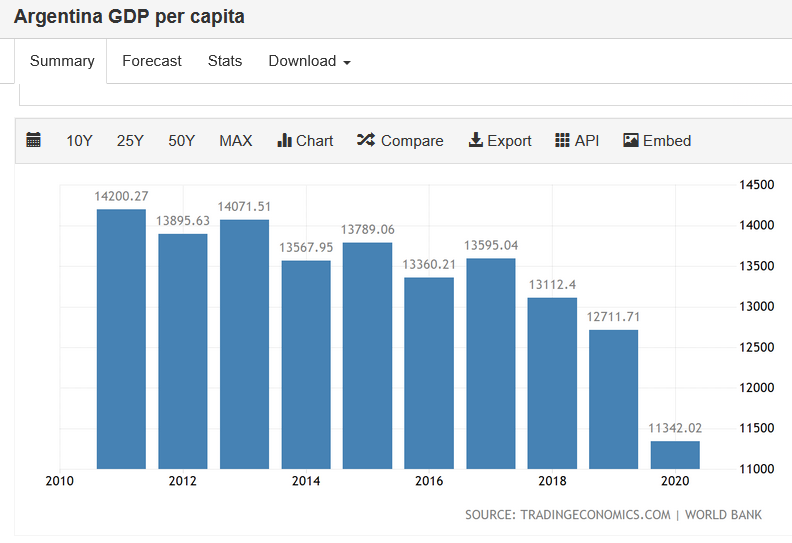 2 data series from Turkey are presented. 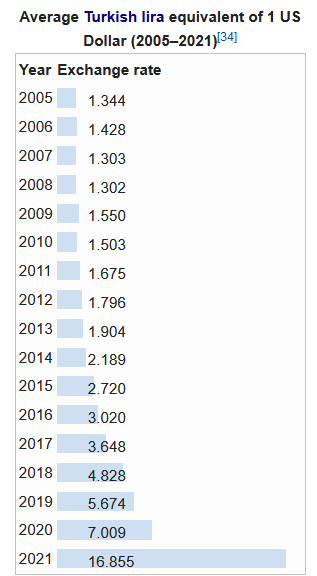 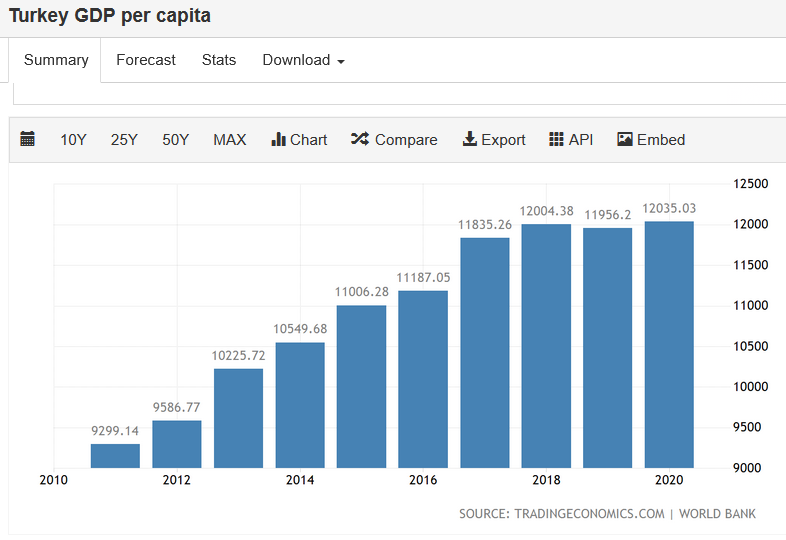 A currency having a lower value does not necessarily mean that the country is poorer or that the economy is not performing well. The value of a currency, in a floating exchange rate system depends on the supply and demand of that currency, which is related to exports, imports, transfers and even speculation etc., which means the value of a currency need not necessarily move in line with the GDP per capita of the country. Many countries also engage in dirty floating, where central banks actively buy and sell currencies to manipulate their value, usually to keep them within a certain range. This further obscures the relationship. There is also the once popular fixed exchange rate system, where the value of a currency with respect to another currency, a basket of currencies or gold is fixed.

In some cases, an undervalued currency can actually have some advantages. If your currency depreciates, then it means that foreigners will find your country's goods and services cheaper, thereby increasing their demand abroad, to the advantage of the sellers of your country. On the flip side, foreign goods will be costlier now, to the disadvantage of the buyers of your country. As with most of the things in Economics, this also comes to tradeoffs.

Some countries are alleged to deliberately keep the value of their currency low to encourage exports. For example, the US Treasury Department's semi-annual currency report has a monitoring list, which tracks currency market interventions, high global current account surpluses and high bilateral trade surpluses. In 2019, the US Department of Commerce said it would impose anti-subsidy duties on products from countries that it thinks engage in practices to undervalue their currency against the USD, possibly including China, India, Japan, South Korea etc.

In the long term, according to the Purchasing Power Parity theory, the value of one currency against another would be such that the same basket of goods costs the same in both the currencies. But this does not happen all the time, as the market exchange rate is more volatile and reacts to changes in demand in each location, the price of labour, tariffs etc. (see the Balassa-Samuelson Theorem). Even in the long term, trade barriers, non-tradeable goods etc. pose hindrances. The Relative Purchasing Power theory is a weaker version of it.

To summarise, the exchange rate is determined by a lot of different factors in different systems, and need not necessarily move in the direction of GDP per capita. Furthermore, in some cases, an undervalued currency may have some benefits.

15
What benefits does Bitcoin (i.e. cryptocurrency) offer?
6
Why is the Euro a bad idea compared to other currencies?
0
What does 'currency convertibility' mean?
0
How can a currency be tied to a commodity like energy?
1
What are the advantages of using euro for Greece?
2
What is the name of this economics tale about the role of money?
2
Currency vs purchasing power?
0
What are the consequences of a single global currency on trade?