My question is quite simple. Could someone given an example of how to determine a Sequential Equilibrium given a set of Perfect Bayesian Equilibria?

The definition of sequential equilibrium where consistent off-equilibrium beliefs are limits to sequences of completely mixed strategies is a bit abstract, so I am unsure how to use it in practice.

Take the Beer and Quiche Game as an example.

Let's verify that the following is a weak PBE:

The figure below depicts the above equilibrium in a game tree. 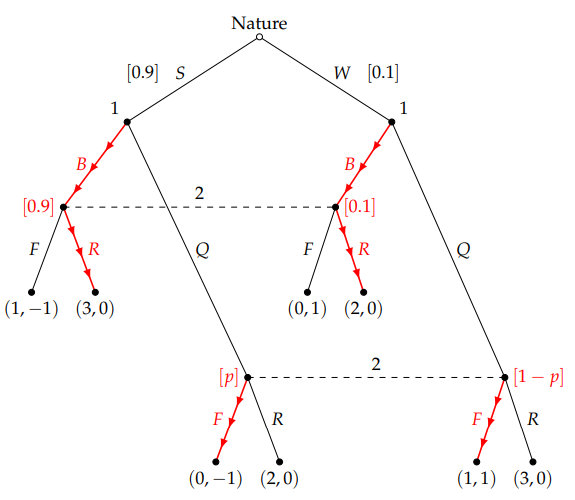 Thus, we have shown that the proposed strategy profile and belief system is a weak PBE.

Next, we show that this weak PBE is also an SE. To this end, we need to show, in particular, that player 2's beliefs specified in the weak PBE can be justified by a sequence of player 1's completely mixed strategies that converge to her equilibrium strategy.

Since player 1’s beliefs are trivially consistent, we conclude that the strategy profile and belief system of the weak PBE is an SE.