Is there a long-run tradeoff between inflation and unemployment?

could exist a long-run trade-off between inflation and unemployment?

Both cointegration methods, and non-cointegrated structural VARs identified based on either long-run restrictions, or a combination of long-run and sign restrictions, are used in order to explore the long-run trade-off between inflation and the unemployment rate in the post-WWII U.S., U.K., Euro area, Canada, and Australia. Overall, neither approach produces clear evidence of a non-vertical trade-off. The extent of uncertainty surrounding the estimates is however substantial, thus implying that a researcher holding alternative priors about what a reasonable slope of the long-run trade-off might be will likely not see her views falsified.

Overall, the evidence discussed in this paper provides essentially no support to the notion of a non-vertical long-run Phillips trade-off—in particular of a trade-off which can be actively exploited by a policymaker in order to permanently reduced the unemployment rate.

In addition you can also see from data that there does not seem to be any long-run relationship (see ibid pp 258). 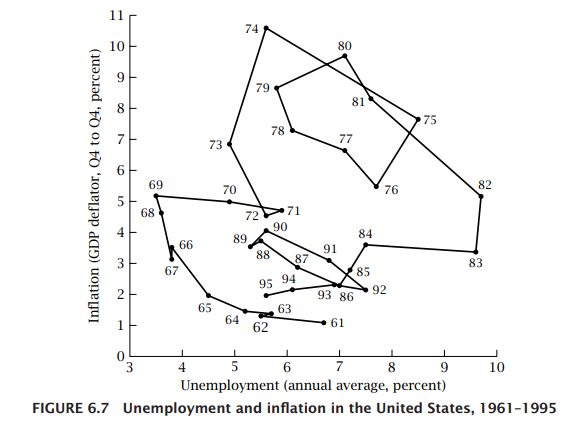 PS: One should not confuse hysteresis effect (situation where temporary shocks have permanent effect), with Phillips curve inflation-unemployment trade-off where increase in inflation can decrease unemployment and vice versa.

Let me illustrate the difference.

Suppose that the Phillips curve is given by following equation (see Romer Advanced Macroeconomics pp 259):

where $\pi$ is inflation $\pi^*$ expected inflation and $y$ is a log of actual output and $\bar{y}$ log of natural level output so the expression in brackets is output gap. Output gap in turn determines the level of employment in the economy.

Now suppose we have not just one equation but 2

Clearly as long as we assume that $\pi= \pi^*$ in long run Philips curve is flat (no employment inflation trade-off) in spite of the hysteresis effect.

Opinions differ (as always in economics) but there is some evidence that there also a long-run tradeoff due to hysteresis. Long periods of unemployment may cause the natural rate of unemployment to move up as well, e.g. due to the loss of human capital or insider-outsider dynamics in labor markets. One of the earliest papers is the Blanchard/Summers (1986) paper. But already Phelps (1972) in his book outlined that hysteresis may cause the long-run Phillips curve not to be vertical. See for example Cross (1987)

Studies like Di Bella et al. (2018) suggest this to also be an empirical issue. Hysteresis implies that for example fully stabilizing inflation at a low level vie monetary policy after temporary supply shocks may result in permanently higher unemployment. This contrasts with typical Phillips curve models where the natural rate of unemployment is independent of such demand factors like monetary policy.

Not the answer you're looking for? Browse other questions tagged macroeconomics labor-economics monetary-policy or ask your own question.

6
Right definition of natural rate of unemployment?
2
Medium run conclusions from Okun's Law and Expectations-Augmented Philips Curve
1
So what exactly happens to the real interest rate in the long run?
0
Expectation augmented Phillips Curve
0
Why Keynesians prefer short run measures despite straight long-run Phillips curve?
2
How would a perfectly competitive industry respond to a macroeconomic demand shock in the long run?