This year, the general deficit of India (deficit of Union and all State governments) is expected to be 9.9% while pre-covid it was ~6.5% (3.4% union +3% limit on states borrowing).

I want to ask if this increased deficit of ~3.5% contributed to increased GDP growth (before covid, India economy had slowed down to 4-5% per annum (India GDP Annual Growth Rate), while it grew at 8.9% last year, is projected to grow above 8% this year and is expected to have 6.9% growth next year(IMF cuts India's growth forecast to 8.2%).

I understand that the negative growth in 2020 has created a huge base effect that has not yet vanished as shown below (and even with 7% per annum, it will vanish only by 2025) (Yellow are hypothetic projections assuming 7% growth in 24, 25): 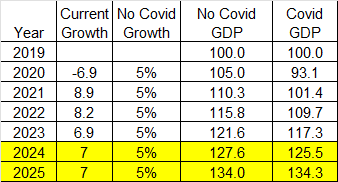 Clubbed together with covid recovery, my question can be stated as follows

Have deficits led to an inflated GDP growth rate? if so then deficits causally affect GDP growth rate, then it can be said that with the current deficit spending, the economy will need 5 years to cancel the base effect. And if the deficit was withdrawn, the GDP growth would have been even slower and rebound time might have been longer, as a toy model, I assumed 6% no deficit growth and it takes 12 years to cancel base effect: 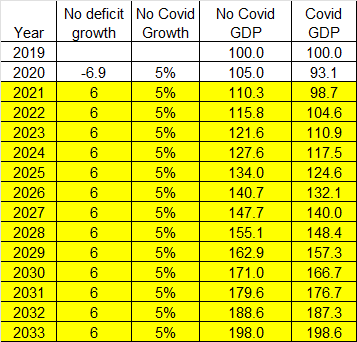 So if the assertion that deficit causally affects GDP growth is true, then the current jump in GDP growth rate is due to covid base effect and government's largesse and the fundamentals of economy remain weak as pre covid?

I am asking this because I have read many times that post-2008 growth in China has mostly been debt fuelled and growth would have been lower if government would not have encouraged cheap debt.

2
Can the growth rate increase after a change in the base year?
3
Correlation and Causality: Data comparison of educational spending and GDP growth
1
Converting a GDP series to constant international dollars
2
Can a spending freeze solve the problem of the Italian enormous government debt?
5
How is the GDP growing when nothing else seems to be?
2
Why does the answer not include increased negative unplanned stock investment?
37
Why do we need to "get the economy moving again"?
1
How can the GDP's growth rate be positive, when the GDP decreases?
7
Why does the inflation not follow the money supply?