In what ways will taxing corporations reduce inflation?

President Biden Tweeted to the effect that taxing corporations will reduce inflation. When I look at what goods are experiencing the most inflation it seems to be things like groceries and rent. What hope is there that taxing corporations more will reduce inflation on these goods? It seems to reason that the only way taking money out of the economy will reduce inflationary pressure on these goods is to ultimately take it out of the pockets of those buying the goods. How does increasing taxes on corporations target the inflation I experience without also targeting the people buying those goods (also me)? It seems like whatever mechanism you use, you are ultimately stuck undoing stimulus spending. Is this just political maneuvering to do just that?

It is actually not crystal clear whether corporate taxes reduce inflation. There are both demand and supply effects to consider (see Tanzi 1982).

Lets start by considering the demand side of things. Aggregate demand (AD) depends positively on government spending and negatively on level taxation. Increasing the level of taxation will suppress AD. Although a priori we can't say whether increase in taxes will suppress to fully reverse previous stimulus (which boosted AD) as you suggested. These taxes could either suppress AD to more then offset previous stimulus, to exactly offset it or to less than offset it.

Nonetheless, in any case from demand side perspective the taxes would have negative effect on rate of inflation whether they are sufficiently high or not to offset previous stimulus. However, it is worth noting that this would come at cost of depressing economy that is probably headed into recession caused by Russo-Ukrainian war.

Now, if US government would levy lump-sum non-distortionary taxes the above would be end of a discussion. However, taxes that depend on level of economic activity (such as corporate taxes), also can have negative supply effect as they distort incentives to invest in companies (e.g. see Federici & Parisi 2015; or see the famous Mirlees Review especially the first volume). This would reduce long-run aggregate supply (LARS) which depends, among other things, also on level of investment.

How big these distortions are is again empirical question, depending on parameters of the economy the effect could be smaller or large. Below I drew a picture for you showing two scenarios where depending on whether the shock to LARS is high (H) or low (L) the price level will either increase or decrease leading to either higher or lower inflation in the process (inflation is positive change in price level). The new price level is given by intersection of $LARS_i$ with $AD_2$ which represents the effect of increasing taxes on shift in aggregate demand from the original aggregate demand ($AD_1$).

Not much more can be said based on the vague tweet. In fact the tweet does not even mention the taxes will increase. Biden just says that inflation would be reduced by corporations paying their 'fair share' which could in principle be even lower than their current tax burden depending on how he defines fairness. 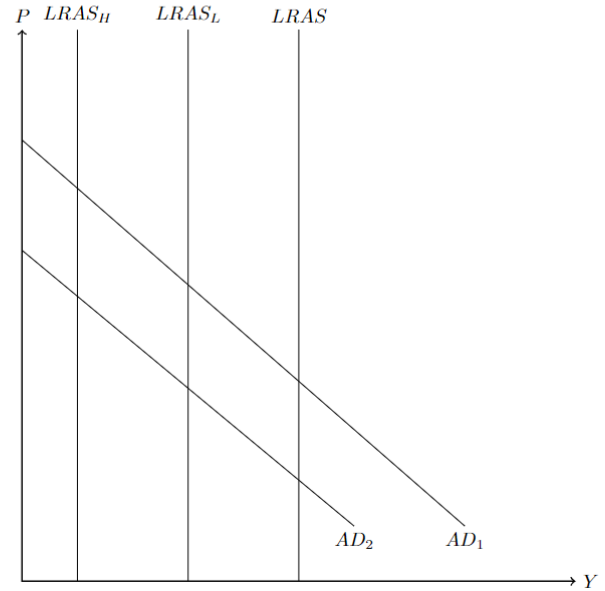 Not the answer you're looking for? Browse other questions tagged inflation monetary-policy taxation political-economy or ask your own question.

5
Limits to Quantitative Easing Programmes
3
How does tariff increase inflation?
2
Government debt and Fiscal Theory of Price Level
0
Debt-to-GDP ratio in connection to inflation
16
Why aren't we seeing carbon taxes in practice?
0
Why Keynesians prefer short run measures despite straight long-run Phillips curve?
1
What is the rationale for setting a 2% target rate for inflation
1
If current inflation is (probably) not due to corporate pricing power, then why are profit margins currently so high?