Why did economic forecasters get inflations predictions so wrong?

I come from more of a statistics and applied math background, but I am interested in issues of social science. I have been trying to understand why economic forecasters or forecast models seems to have make such bad predictions about inflation over the past few months. Just a caveat, I don't mean to bash on economic forecasters or their models etc., this is just legitimate academic curiosity. I was just looking at some recent articles on this topic, and the explanations seem to be all over the board, without grounding in any common foundation.

Some of these articles might be click-bait, but there is a real question here. I imagine that economists have large forecasting models run by Treasury departments around the world, as well as say Central Banks, and academic departments. These are probably variants of Dynamic Stochastic General Equilibrium (DSGE) models. These models have been refined over years and years with lots of data and additional computing power, etc. In parallel, climateological models have also received lots of investment and support to improve their models since the 1950s. With climate models, the accuracy of the predictions has increased geometrically, if not more, over the past 70 years.

But I am not sure that this is a valid reason? I mean the forecast models don't need to track covid specifics, but if there are obvious imbalances in trade statistics or payrolls or inventory accumulations, then shouldn't the forecasting models still be able to propagate that information into the future? I mean climate forecasting models did not anticipate the reduction in CO2 and other greenhouse gases due to factory closures, but we don't see degraded predictions in climate and weather forecasts.

In the second article reference, Jason Furman, economist suggests how unrealistic predictions made by the Council of Economic Advisors were on unemployment. The problem with this prediction is that they are not just bad, but they are essentially "non-physical" outputs. Here is the quote.

Figure 2 mechanically translates the GDP numbers into unemployment numbers based on the relationship between GDP growth and employment gains described by the Council of Economic Advisers (2009). In the case of the normal multipliers, this results in the economically absurd forecast of a 1.1% unemployment rate in the first quarter of 2021, a sign that something is wrong with this methodology – a topic I will return to.2

It is obvious that an unemployment rate of 1.1% is essentially impossible. In studying numerical methods for partial differential equations, we would call outputs like this "non-physical" in the sense that a numerical PDE solver is giving predictions that are not physically possible. Correcting non-physical solutions has spawned entire literatures on finite volume methods and conservation laws, etc. If a model is giving such crazy outputs, then it is obviously not respecting some basic conservation laws, right?

So I am just trying to understand what are the issues with current forecasting models and methodologies that lead to these types of forecasting errors in inflation. The goal is ostensibly to figure out how to solve these problems so that forecasts can improve.

If one could make such long comments, I would write this as a comment, not an answer. I neither forecast weather, nor inflation. However, I am a risk manager in banking, and forecasting is part of my job, at least to a small extent (e.g. modelling non maturity deposits for computing interest rate risk in the banking book and the like). My institution seemed to do reasonable well with NMD modelling, but performed very badly after COVID started. It may be due to my (teams) lack of skills, but rumour has it that essentially all other banks struggled significantly since Covid as well. I believe that modelling people's behaviour works well, until it doesn't. Inflation is essentially a result of interactions of many people in the market place.

Let's look at some CO2 and hurricane forecast data: 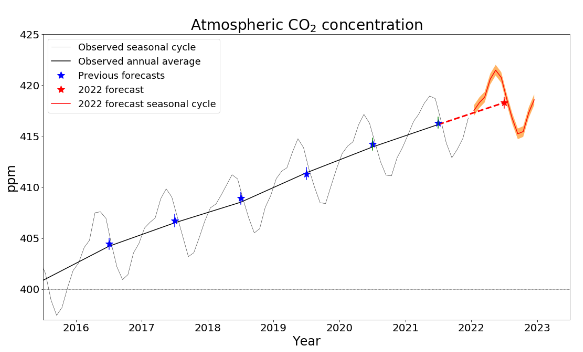 In my opinion, this is a textbook example for a simple forecast with very pronounced and regular seasonal swings. It also seems COVID19 had little (to pretty much no) impact on the observed values when looking at the chart only. This pattern seems to be simple to forecast, even ignoring anything related to Covid or El Niño (CO2 seems to rise during El Niño according to this source and all others I checked). Reminds me a lot of Liquor sales forecasting in Elements of Forecasting.

Seasonal forecasts of hurricane activity issued by three prominent forecasting groups have been compared with observations. Looking at the forecast errors since 2001, no significant improvement is visible for any of the examined forecasting schemes.

Forecasts of hurricane landfalls are even more difficult and one of the groups in question (CPC) does not provide them.

hurricane activity exhibits such strong variability that the actual outcome each year often deviates strongly even from the relatively skillful August forecasts.

Despite some unsuccessful years in hurricane forecasting all stakeholders will keep looking at the seasonal forecasts with great interest in the future. The 2013 forecast was one of the worse ever. This could be the result of simply bad luck or the result of important predictors being missed.

MIT's predicting hurricanes seems to also conclude that here are far fewer good options available to predict the intensity of hurricanes because the reasons behind intensity changes are not fully understood and there are many factors involved.

In essence, there is only a handful of Data Series being used in the model.

What was suggested to have caused high inflation?

The ECB believes its a combination of a quick reopening (we did see a large unexpected and unprecedented increase in deposits / savings across the spectrum during lockdown, despite passing on negative interest rates in countries where this was possible, probably because people did not find ways to spend their money), supply chain disruptions (semi conductors for example; which caused record high credit growth rates for inventory financing because "everyone" just wanted to get hold of "whatever they could" to make sure production is not disrupted), and higher energy prices and the Base effect (Inflation is high today because it was so low last year).

I argue, that apart from the Base effect, nothing can be modelled in this DGSE model (unless you assume changes and feed these changes as shocks). While this model may seem extraordinary simple, I invite you to look at the details.

Let's focus on energy prices (not modelled at all in the FED DSGE model for example). The ECB writes that

wholesale gas and electricity prices in particular, annual growth rates in the fourth quarter of 2021 (540% and 390% respectively) were around four times their previous maximum during the period from 2005 to 2020, and all observations since the second quarter of 2021 were well above all previous historical values. Russia’s invasion of Ukraine caused energy commodity prices to increase even further in the first quarter of 2022.

DB Research, prior to the Russian invasion in the Ukraine, states that the reasons for the sharp increases in energy prices are manifold.

Assuming you could perfectly model demand, modelling the mess of supply shocks is impossible in my opinion. The article also states climate policy measures like the new carbon levy introduced in Germany in 2021, which increased prices for petrol, diesel, heating oil and natural gas by around 5.5%, 7.1%, 16% and 7.7%, respectively (compared the annual average prices for the year 2020).

Now, most forecasters and policy makers believed many of these effects to be transitory. I think it is reasonable to assume no one forecasted that Russia is going to invade the Ukraine, AND forecasted how the rest of the world reacted. However, a good inflation forecast would need to incorporate this major event. For example, it seems the war has a significant impact on car production. That said, the car industry and used cars alike saw major disruptions (PDF download) even prior to the war. Possible reasons are pent-up demand, higher savings rates, shifted consumer preferences due to social distancing making public transport more challenging, and the rise in second-hand online platforms during the pandemic as well as supply chain disruptions (which intensified with the war).

Now given all that info, it is hard to imagine a country does not have much inflation. Yet, Japan still has moderate inflation (2.5% for all items in Apr 2022 according to e-stat.go.jp). It may be difficult to explain why onions increased by almost 100% whereas Welsh onions fell by 16.7% over the year, 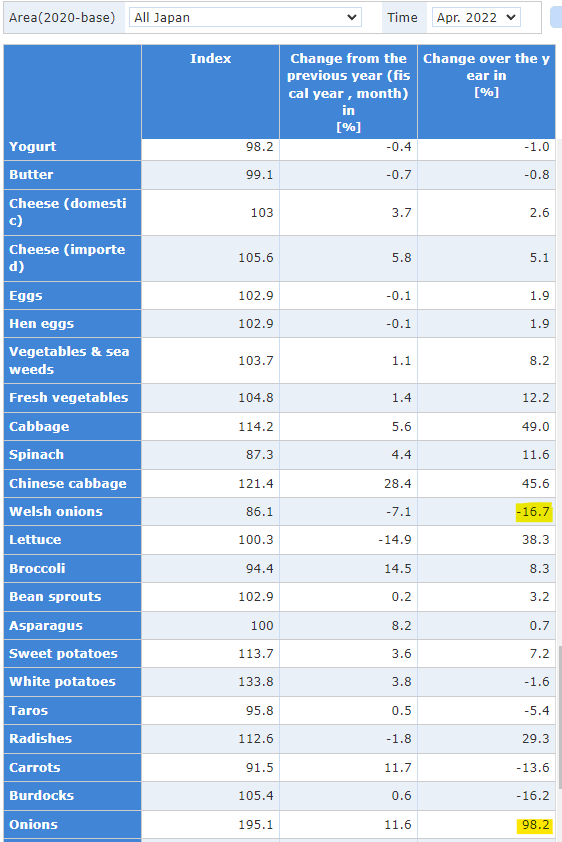 but the main question is why Japan, despite being exposed to the same shocks (especially in energy prices, and due to the weakening Yen even more so) as other countries, exhibits almost no pass-through from rising prices to higher consumer prices and wages.

Long story short, what does

Given all the historical data that these models have

help you if none of these causes ever happened before (in tandem)? Or when do you remember the last lockdown, a significant war in Europe that (has to potential to) drastically affect(s) energy and food supply, and major interruptions in the global logistics sector or trade to happen within months?

Not the answer you're looking for? Browse other questions tagged macroeconomics inflation general-equilibrium forecasting or ask your own question.

23
Should we expect more structural technological unemployment if growth becomes more limited by natural resources and less by labour?
1
Rational expectations econometrics: a theory or an excuse?
6
Predicted recessions that never happened
0
Can you recursively forecast one variable using two variables?
2
Did William Nordhaus exclude 87% of economic industries from his climate change analysis?
4
How good is a forecast? (Many outputs)
1
What are good (i.e. non-random walk) time series to perform forecasting on?