Japan: Will the quantity of money per unit of output and the consumer price index show a huge divergence in the decades after 1980?

Milton Friedman, in one of his talks in 1980, showed a series of examples to illustrate his statement that inflation was a monetary phenomenon.

One of the examples he used was Japan. The following chart appears in his talk (please forgive the bad resolution): 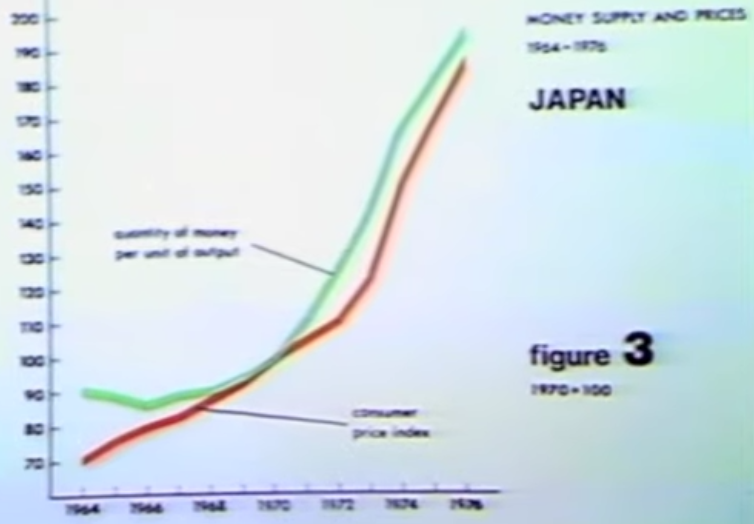 Will the same chart plotted in the decades after 1980 show a huge divergence between the quantity of money per unit of output and the consumer price index? ["huge" here means that the apparent correlation would seem non-existent].

This is how the series looks like with new data provided by Fred. Fred provides some of the data only from the 90s. The dataset used are M2 for Japan, Real Gross Domestic Product for Japan and Consumer Price Index of All Items in Japan.

As you can see the relationship still held by the late 90s but then there was divergence after 1998. However, the Pearson correlation coefficient is 0.02 and not significantly different from zero in the sample. 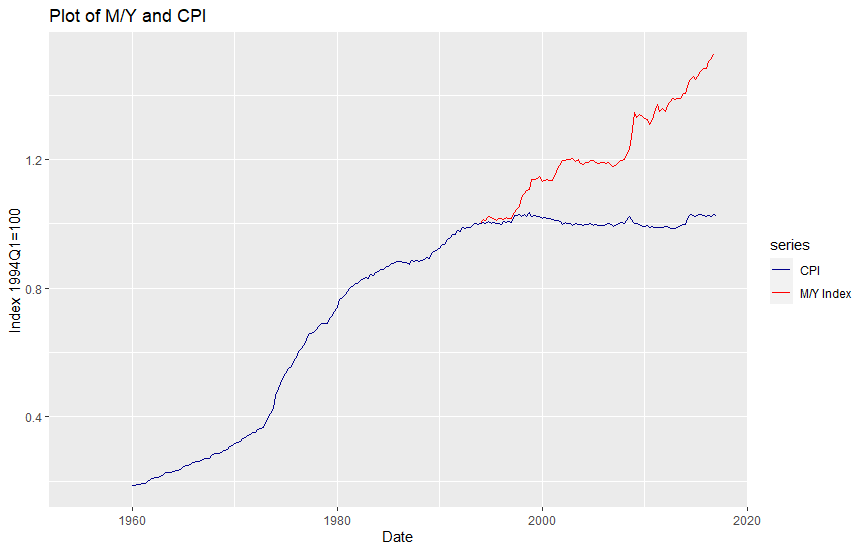 If so, what are the reasons for this unexpected divergence where the prices don't increase with the increasing quantity of money?

Ever since banking crisis in 1997 (when the divergence started) there was declining velocity of money in Japanese economy. Using the quantitative theory of money price level is given by: $$P = \frac{M}{Y} V$$

Friedman assumed that $V$ is more-or-less fixed because empirical observations at his time showed that it is usually fixed. That's why Friedman plotted $P$ against $\frac{M}{Y}$, because if $V$ is fixed then all variation in $P$ should be explained by $\frac{M}{Y}$.

That held up to about 1997 when the velocity of money in Japanese economy started to rapidly decline (see Sudo 2011). As for what caused the decline in velocity of money there could be multiple reasons. Changing liquidity constraints, rapidly aging population etc.

Does it mean that people continue to hoard increasing quantities of money in their bank accounts and prefer not to spend it?

They do not necessarily hoard it in their bank accounts, some more old fashioned people might do it under a mattress but yes.

Not the answer you're looking for? Browse other questions tagged inflation monetary-policy money-supply money japan or ask your own question.

1
What exactly is "quantity of money per unit of output"?