Why is the Correlation between Interest Rates and Inflation positive?

I regressed quarterly CPI on lagged quarterly (from 1 to 8 quarters) 10-year Treasuries, and found that with data from roughly 1990, the coefficient of the lagged rates tends to be positive. This implies that as interest rates rise, inflation also rises. Excluding the earlier data and using only more recent data results in a negative coefficient. I thought this might be due to the ineffective use of interest rates following the oil crisis in the 70s, but the 80s also follow this trend.

P.S. Using the Federal Funds Rate results in a positive coefficient no matter what.

The answer is that what you are getting is bias from naive regression and there isn't a positive relationship, careful empirical studies using appropriate models show the relationship is negative. If you are running simple naive regression you will get biased results due non-stationarity of the series and endogeneity. Hence your positive correlation is caused by bias and is no indication of what the relationship between the two variables is.

To examine relationship between interest rates and inflation you need some model that can handle both endogeneity, and series being non-stationary and in this case actually not just non-stationary but also cointegrated. An one alternative is to run Vector Error Correction (VEC) Model. VEC similarly to VAR solves endogeneity problem and it allows for non-stationary and cointegrated variables (see Verbeek A Guide to Modern Econometrics 3rd ed ch 9.5).

Empirical studies such as Booth & Ciner (2001) show that there is a negative relationship between interest rates and inflation around the world: 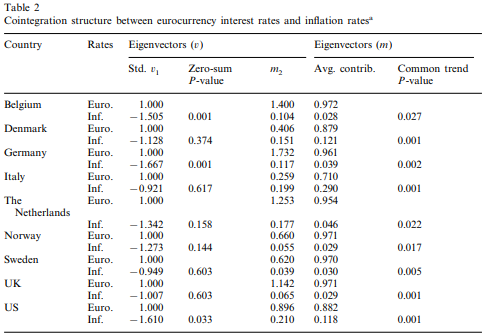 If there would be Fisher effect present the relationship would be positive in the cointegrated models above. In naive regression you just get positive results because of endogeneity and stochastic trends that create spurious correlation.