The median as a welfare function

AFAIK, the most common welfare function is the sum of utilities, also called utilitarian welfare. A more general function is a weighted-sum, in which each agent has a different weight. Such functions are well-studied. For example, it can be proved (e.g. Varian, 1976) that an allocation is Pareto-efficient, if and only if it maximizes a weighted-sum welfare function, for some choice of weights.

reference-request social-welfare
Share
Improve this question
asked May 1 '15 at 8:34

John Rawls, in his book, A Theory of Justice, discusses the Maxi Min Principle, where he essentially says that societies can be compared based on how well they maximize the welfare of those with the lowest welfare (subject to caveats about certain basic human rights). If the typical welfare function is a weighted average of individual welfare $U_i$ like: $$\sum a_i \cdot u_i$$ over all $i$, then this welfare function is $$\min u_i$$. Since the minimum is the 0th percentile, I think this would just barely qualify as an answer to your question. I suspect that's not exactly what you had in mind, but it might be helpful.

This metric has appeared in a number of economics papers including Amartya Sen 's 1977 Econometrica paper, On Weights and Measures: Informational Constraints in Social Welfare Analysis, The Aggregation of Climate Change Damages: a Welfare Theoretic Approach (Fankhauser, Tol, and Pearce (1997)), and Optimal Redistributive Taxation When Individual Welfare Depends Upon Relative Income (Boskin and Sheshinski (1978))

One more thing: I've also seen a blog post that compares Swedish and American incomes at all income deciles and shows the level of percentiles at which a poor person would be better off in Sweden: 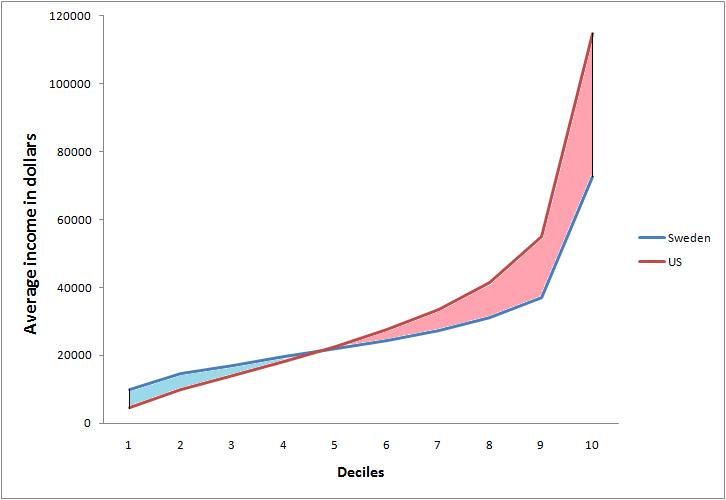 The Economist's View has a related figure for more countries.

Not the answer you're looking for? Browse other questions tagged reference-request social-welfare or ask your own question.