Why absolute value in elasticities and marginal rate of substitution?

This is a point I find very confusing and very hard to justify to students. Depending on the books, one finds many different conventions regarding the sign of elasticities and marginal rate of substitution (MRS). Some define them with absolute value, some don't, and one sometimes finds inconsistencies inside a single book or set of notes.

I think there are pedagogical advantages to discussing both the raw numbers and the absolute values and I think the benefits of both explain why they both show up (sometimes in the same text, even).

Each elasticity number gives two bits of information. First, the absolute value with respect to 1 and second, the sign. Now, clearly, if you had a negative elasticity, you could compare it to -1. However, it becomes somewhat difficult to teach when using phrases like "greater than" or "less than" -1 to discuss a good being (in)elastic, since "greater than -1" is actually inelastic if the elasticity is negative. It is much more intuitive to be able to discuss the ratios of percent changes if "greater than" does in fact mean that the top is bigger than the bottom and vice versa for "less than".

Of course, there is also a bunch of information tied up in the sign of the elasticity. We get the Law of Demand out of own-price elasticity, we get compliments/substitutes from cross-price elasticity, etc. So it is important to still make sure students understand the importance of the sign.

As for MRS, it's usually not the absolute value, per se, that we report, but rather the negative of the derivative dy/dx. This is quite standard, since it has the intuitive interpretation of the consumer being willing to give up so many units of x for so many units of y. Since indifference curves are usually convex, this derivative is negative, thus changing the interpretation (and intuition) somewhat if we don't negate it.

Related to the MRS, this is a more general problem regarding negative slopes. I confess to continuously being confused for many-many years on the matter (and having to pose and think), until I constructed the following mental image in my mind, which I share here just in case somebody else may find helpful: 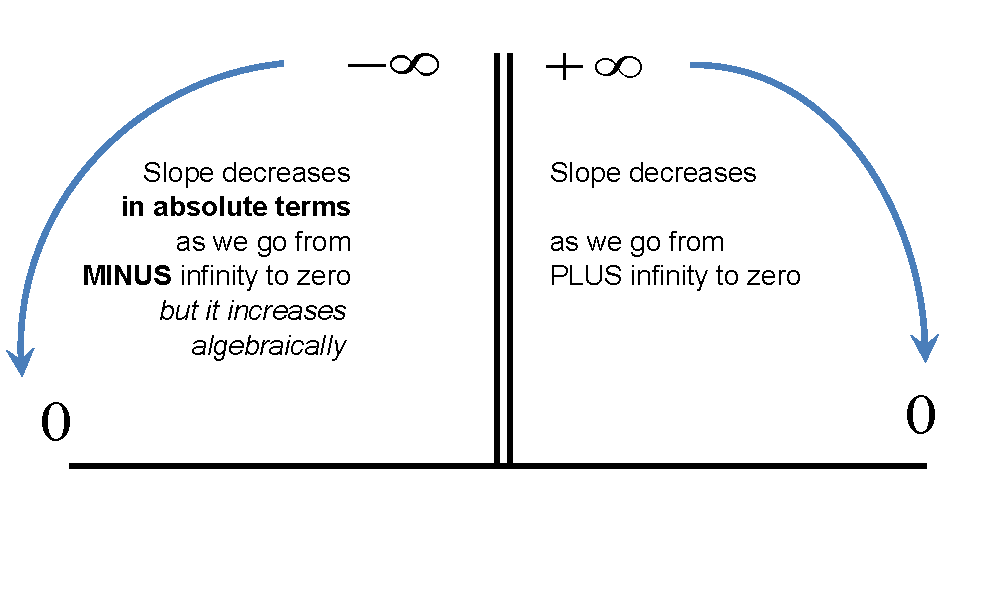 The trick is to put minus and plus infinity side-by-side on top, and imagine straight lines rotating following the arrows.

So when we deal with negative slopes

Can't resist this quote from Samuelson, though I'm afraid it's not very helpful:

Through the influence of Alfred Marshall economists have developed a fondness for certain dimensionless expressions called elasticity coefficients. On the whole, it appears their importance is not very great except possibly as mental exercises for beginning students.

Not the answer you're looking for? Browse other questions tagged microeconomics elasticity or ask your own question.

5
Is MRS supposed to have a minus sign or not? What's there to say about convexity of preferences?
1
Profit Maximisation if MC is still falling after intersecting MR