I am currently doing a research work on quantitative easing and can't find any example of it occurring in Africa. Have any African central banks ever used QE?

For Quantitative Easing to happen, a central bank needs to expand its balance sheet by, more or less, "printing money" from scratch. Quantitative Easing is a difficult policy in that you want to encourage inflation to force investment, but at the same time you need to control that inflation. For this reason QE should be used only when central banks believe economy is growing slower than it could/should be, which does not happen a lot in Africa.

For QE to be efficient, you need a strong central bank/currency, ie printing new dollars will create more dollars, but printing new 1920s Deutschmarks will only bring down the value of an individual Deutschmark.

To my knowledge, the only African country that wandered in Quantitative Easing is Zimbabwe. The success of this policy may by itself discourage any other comparable country to engage in such a policy.

QE is a last resort policy for stalling economies. Japan, Western Europe and the USA are countries where QE has been widely discussed because it is sometimes believed investment is delayed in hope of better days - QE should prevent this, but this is not a typically African problem, to my knowledge.

TL;DR: Even if African central banks were strong enough to engage in QE, African economies don't need such a policy to date.

Note that as mentionned in a comment, Quantitative Easing is a set of policies that has no standardized definition and that some examples above are anachronic with regard to the relatively recent introduction of the notion. While the term dates back to the early 2000s, what we know describe as QE was never practised as strongly as in the 1930s and 1940s against the Great Depression.

Quantitative easing (QE) is an historically unusual monetary policy tool that involves the purchase of financial assets by the central bank. Unlike similar assete purchases used for moving exchange rates, these assets are typically local currency denominated and not sterilized. Although central bank purchase of government debt occurs in both QE and monetization (like what occurred in Zimbabwe and the Weimar inflation), they are actually quite different. Under QE asset purchases are usually expected to be temporary and accumulated assets (money) ultimately resold (returned in exchange for assets). Monetization has neither expectation.

QE is typically been employed as a way of increasing the monetary base when interest rates at or close to the zero lower bound and therefore conventional monetary policy tools like changing the federal funds rate are (thought to be) ineffective. Many African countries are poor candidates for QE because they have pegged currencies, participate in a currency union, or have high inflation. 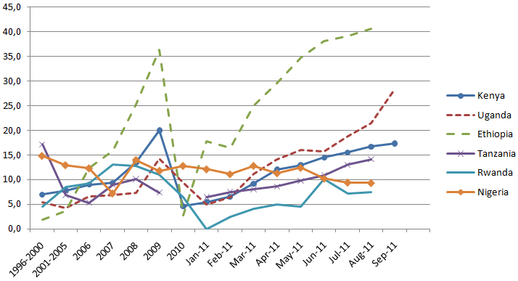 QE can be done in Africa but it would be of no benefit to us as most of our debt and bop payments are dominated in hard foreign currencies ($ € £ ¥) so any attempt by an African or any other small economy to print money to stimulate its economy will do the opposite. The currency gets devalued making both debt and bop obligations more expensive, leading to higher inflation, which will lead to higher budget deficits as more local money is needed to pay for debts and imports, which leads to either:

Not the answer you're looking for? Browse other questions tagged monetary-policy inflation quantitative-easing or ask your own question.

1
Europe Quantitative Easing
6
Who regulates the balancing of the books for commercial banks? How? Is it public information?
5
Limits to Quantitative Easing Programmes
1
When the ECB does QE, does it print new money?
1
Quantitative easing
4
Can quantative easing be summarized as “The state prints cash to pay its debt to private sector”?
0
How yield rates influence the “cost of borrowing” for borrowers
1
Why doesn't QE cause the federal funds rate to continue decreasing?
3
Are quantitative easing and helicopter cash really different tactics? And how does QE relate to Modern Monetary Theory?