In my basic high school economics course, we've always used supply-demand curves that are lines to simplify calculations. In real markets for real goods, what do the supply and demand curves look like? From a mathematical perspective, what would be the concavity, asymptotes, and intercepts?

microeconomics supply-and-demand
Share
Improve this question
asked May 18, 2015 at 16:33

You sometimes find textbooks drawing the supply and demand curves as concave upwards, as such: 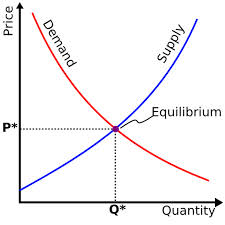 The straight-line supply and demand curves can be thought of as a magnification of this graph, where the two intersect. Thus, the units on the axes would give you a clue as to how high up the graph is being drawn, or how far to the right (if the units start at a number other than 0 or skip an interval). This shows you why they are indeed called 'curves', even when they are sometimes straight lines.

Supply and demand curves are drawn using straight lines for simplicity. For example, two straight-line equations may be given, from which it is relatively simple to calculate the point of intersection.

In the real world 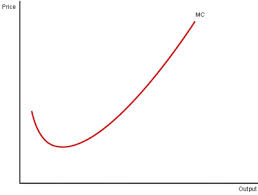 However, due to the firm's variable costs, output is always greater than that at the turning point of the marginal cost curve. 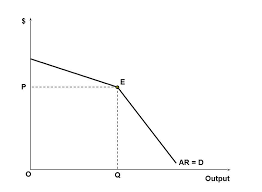 1
Is this supply and demand reasoning in Picketty's book circular?
6
What does a supply+demand curve look like for fare evasion?
2
Elasticity with perfectly inelastic / elastic demand
3
What Does "Quantity" Represent When Looking at Supply and Demand?
5
Can Linear Supply-Demand Equilibria Be Understood as a Feedback-Control Process?
1
How to Calculate Price Elasticity of Demand When Perfectly Elastic?
1
Examples of bounded, positive, inverse demand curves
0
Why doesn't the supply curve shift to the left in the following situation? Why do producers respond to the surplus by cutting their prices?