Reactions of the Money Market

Here's the image of a money market with two different money supply and demand curves: 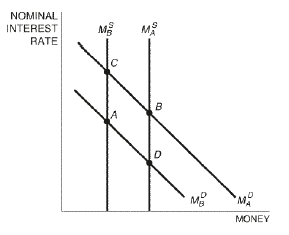 Here are some questions regarding money market reactions. I'll always write my proposed reasoning underneath each questions, with a summed up answer at the end of the paragraph, and I need you to check if it's correct.

1) There's a GDP increase and no monetary policy was implemented. Is a movement from point $A$ to $C$ or $D$ to $B$ a logical reaction?

The LM curve formula is $L(Y,i) = Money Demand/Price Level$ If the government has set the money supply to $M_B^S$ and we're in point $A$, then the reaction $A$ to $C$ is correct, because we're shifting the $M_B^D$ curve because of an increase in money demand ($Y$ has a positive influence on the $LM$-equation). Same applies to point $D$, except there we have a higher money supply, so we're moving to point $B$. Answer: Yes.

2) Are the opportunity costs of money saving higher in point $B$ or $D$?

There's a higher nominal interest rate in point $B$, so saving money in $B$ is more profitable than in $D$, thus the decision not to save money in $B$ is associated with higher opportunity costs. Answer: Point $B$.

3) Is the money demand in Point $B$ higher than in $C$, because of the transaction motive?

Both points lie on the curve $M_A^D$, and any point on that curve has the same amount of money demand, only the nominal interest rate and the money supply are different. Answer: Point $B$ and $C$ have the same money demand. Answer: no.

4) Can an increase of money supply be interpreted as a movement from point $A$ to $C$?

The movement from $A$ to $C$ implies a shift/increase of money demand not money supply. The correct movement is from $A$ to $D$. Answer: No, A to D is correct.

5) We're in Point $A$ and the households suddenly want to keep less money in their savings accounts. Can this be construed as a shift of the $M_B^D$ curve to the right?

macroeconomics money-supply
Share
Improve this question
edited May 24, 2015 at 15:31

All correct up to 6), although you may want to be careful with "$D$ to $A$ is correct" kind of answer, "$D$ to $A$ is consistent" seems a better phrasing - one has no idea how hard it comes out to quantify those shifts, because they impact each other.

Point 6) changes interest rate, which means that money supply, demand and interest rate do not coincide: the equilibrium is lost on the money market. As it is lost with higher interest rate than the equilibrium rate, it means that people want less money than is available. Like every good, this causes money to lose value, which in turns means either inflation on the open market, or a quick reaction via a decrease in supply from the central bank. As the question explicitly ask for the effect on the market, you can suppose the central bank doesn't make a move, and let the market move into inflation. This does happen in cases when the central bank doesn't want to or cannot cut money supply, usually because the central bank is controlled by the government, that needs the money, and led to some disastrous effects in the past. For this reason, usually central banks are relatively independent from governments, and hopefully the situation is addressed by central banks rather than by the market. 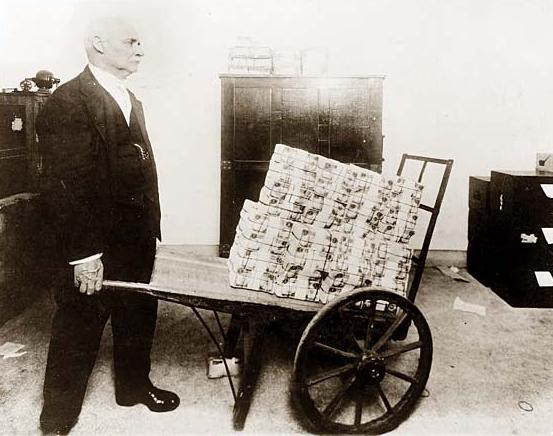 Here is an example of a government-dependent central bank having decided not to cut money. Wheelbarrows were commonly used on the way to buy loaves of bread in 1920s Germany...

Not the answer you're looking for? Browse other questions tagged macroeconomics money-supply or ask your own question.

2
Monetary expansion leads to decrease in inflation?
2
Does an increase in the money supply increase or decrease interest rates?
1
Wealth - Bond Market and Liquidity Preference Framework
2
Why investing in bonds imply a decrease in money demand?
1
What will be the effect on velocity of money when demand for real money increases?
1
LM curve: How interest rate is changing without OMOs by the central bank?
1
Plotting money market equilibrium for 2020
1
Classical Theory of Inflation - Money Supply, Money Demand and Prices