Why did large denomiations exist in the early 20th century?

Today, it makes sense to have a \$100 bill, we can spend it all on a meal at a restaurant and you would need a few of them to pay rent or make a car payment. But in 1900, I can't imagine anything that could be bought with a $100 bill. Perhaps rent? Or a worker's wages?

Compared to the average salary in 1900, a \$100 bill would be the comparable to a $5,500 bill. I can't imagine anything costing that much money today that would justify producing such a highly valued denomination.

My question is: why did we produce \$100 bills in the early 1900s, when there was probably no practical use for them? And also, did people carry $20 bills around in their wallets or were these considered big money?

Even back in the 19th century, the American economist Dunbar reported then that 90% of all financial transactions were being performed as transfers using cheques or bills of payment.

However, in the absence of modern electronic clearing systems, all transfers of money between banks, i.e. all payments with cheques that are drawn on the account of one bank's customer account, and transferred to an account at a different bank, had to be performed via. cash transfers between the banks.

In practice banks used netting operations where they would add up all the cheques being submitted to them, subtract all cheques being drawn on them for payment to another bank, and only transfer the difference. Even so sizeable sums were involved, and these required the higher denomination bills.

Today this is all done through electronic clearing systems, so the main demand for large denominated physical cash tends to come from a desire to avoid taxation, criminal activity, or gambling.

There were plenty of relatively large purchases that were regular enough to buy with large amounts of cash. If you wanted to buy a Model T in 1909 you'd need \$825-\$1000. A typical house could easily cost a few thousand dollars in an age when mortgage finance was much less common. So there were plenty of expensive things to need significant cash for, at least occasionally.

But why cash? The most important part of the answer is bounced checks. If you need to pay someone a lot of money by check you have problem. If Abby gives Betty a check and Abby walks off with the goods and the check bounces, Betty will have a problem. If Abby pays Betty but doesn't give Abby the goods until the check clears, Abby may have a problem if Betty never shows up with the goods after the check clears. You can do escrow, but that's expensive and complicated. Cash allows instantaneous settlement.

Other options existing in this era have other problems. Cashier's and certified checks, as well as money orders may serve in some cases, but don't easily allow negotiation because they denomination is fixed at the time of issuance. Wire transfers have existed since the age of the telegraph but like today remain an expensive technology for everyday use.

Hundred dollar bills are the (update: second) most common denomination today, which may surprise you: 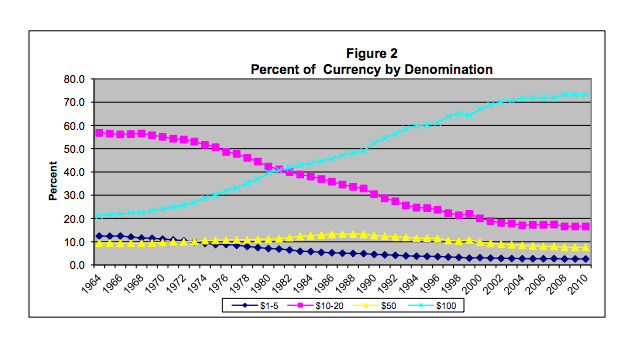 This is mostly because the dollar is used internationally for business transactions.

Not the answer you're looking for? Browse other questions tagged inflation or ask your own question.

3
Why is the Argentine Peso still so expensive?
6
If the price of oil and energy goes down, why does CPI go up?
1
Why did the Fed raise interest rates between 2004 and 2006?
1
What caused the stagflation in the early 1970s USA?
4
Did a similar property boom take place in another country or throughout history like we have seen in London? If so how did it effect the economy?
1
Why did it take so much QE by the ECB to raise the Eurozone inflation to 2%?
1
Why did Germany use hyperinflation to free itself from an external debt?
36
Did real incomes drop significantly since the 1950s?