Why is fractional reserve banking allowed?

I learned about banks' fractional reserves and that revolted me. How is that not considered to be fraud?

The idea doesn't seem too sophisticated, on the contrary, it sounds very simple: the bank just loans money they don't even have and charges an interest rate (which is not low at all) on that virtual money. When I go to a bank to take out a loan, they will just type the amount of money in my account (but the money does not exist) and I will introduce the money into the economy (when I use that money to buy something).

Why are fractional reserves not considered fraud?

I recommend a careful read of the Wikipedia page for Fractional-reserve banking because it seems you are confused about how fractional reserve banking works.
Banks only lend out money they have under fractional reserve banking and, in fact, strictly less than they have. Those funds are a mix of deposits, funds from other debt issuance, and bank equity. They don't lend out funds they don't have and they don't simply credit accounts at will in the way you suggest. When they credit a borrower's account with funds, they have to debit those funds from elsewhere on their balance sheet. So, lend-able funds go down as borrower's funds go up, and then the resulting loan is a new asset of the firm. While they do create money this way, they do so at the expense of these lone-able funds so the loaning out doesn't create new assets for the bank.

This is meant to add to @BKay's answer. Here are some examples that might help to see what's happening when a bank makes a loan.

The image below is text taken from Greg Mankiw's textbook Macroeconomics (7th edition, p. 555). This is a simplified version of a typical bank's balance sheet. Notice that reserves, loans, and securities are considered assets and that deposits, debt, and equity are considered liabilities. 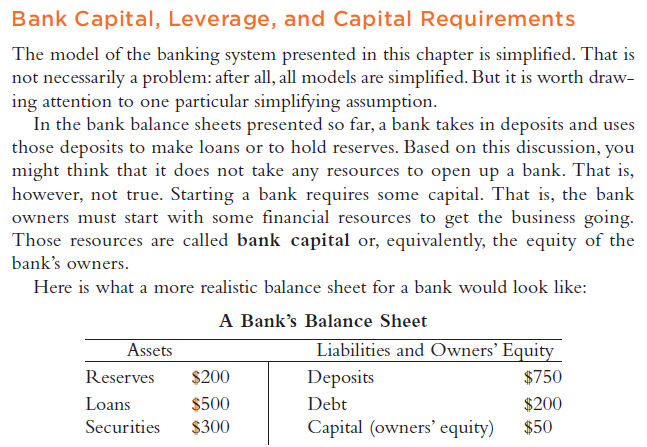 What happens when I deposit money into a bank?

Now, let's first consider what happens when someone deposits money into this bank. For example, suppose someone deposits \$10. The new money goes to the vault which may then be deposited in the bank's account at the Federal Reserve (the central bank). This is a new asset. At the same time, the new deposit is a new liability. All together, this will increase the reserves of the bank by \$10 and the deposits by \$10. Both the assets and liabilities of the bank increased by \$10.

What happens when a bank makes a loan?

Now, what happens when a bank makes a loan? Suppose a bank makes a loan to someone for \$10. In the picture, it's clear that this will increase the amount of loans from \$500 to \$510. Now, remember that loans are considered assets. That is, the borrower has an obligation to pay the bank back.

But, where will the money come from? A few things can happen. One example of what could happen is the following. The bank could use its reserves. In this case, reserves would drop from \$200 to \$190. However, in a fractional reserve system, banks have reserve requirements. The ratio of reserves to deposits must stay above a certain percentage. More realistically, loans might go up by \$11 (because of interest), reserves down by \$10, and owner's equity up by \$1.

(However, I believe that often times, a bank might issue the loan but immediately sell the new asset to another party, while taking only a small cut.)

The benefits of fractional reserve banking

Economists typically agree that the fractional reserve system adds some instability to the economy. However, it also adds many great benefits as well. There is a big literature about the trade-offs here and the many functions of (fractional reserve) banking, in general. (One of the most important economic functions is that it allows us to better smooth out liquidity shocks. See an important paper by Diamond and Dybvig).

There is simply too much to get into here. You might consider opening a new question that specifically asks for a list of the summarized benefits. Also, check out Mishkin's Money and Banking book (undergraduate level) or Microeconomics of Banking by Freixas and Rochet (graduate level, but still very accessible).

Economics is inherently political, so political questions and thus political answers are very appropriate. To pretend that economics is not political is to make it an end to itself and not a means.

The realistic answer to your question is that fractional banking is allowed because of a combination of factors.

A derivative question of yours that was implied and is appropriate to answer is if banking is good for the common welfare of a nation. It is not. You will see many complicated equations and examples that obfuscate this, but the concepts are simple. Banks issue more promises for money then they have. These promises are errantly accepted the same as real base money and this create inflation and volitionality. It is a system in perpetual need of assistance from central banks and would quickly collapse in a liquidity fire without their assistance.

Another way of looking at banks is that they engage in maturity mismatching. They buy long term assets and borrow short term to finance this. This is very risky. If my short term debt is no longer rolled over (and I lost trust from investors/depositors), the game is up.

So what are the alternatives? Allow the public to hold debt-free deposits directly at the central bank. In the USA only private banks can hold Fed deposits. But if we allowed the public to hold deposits (and checking accounts/debit cards) with the Fed, we wouldn't need fractional deposit banking, we wouldn't need to bail it out and we wouldn't have its inflation. Here is a proposal of how such an idea could work: http://wfhummel.cnchost.com/nationaldepositorysystem.html

A simpler way to answer this question is to say that Fractional Banking allows currency to do more work. If I stop stuffing my savings into my mattress and bank them instead, and then the bank lends it out, then that money is doing double work. A central bank is there to make sure this process - the creation of credit - is orderly by essentially insuring private banks. No modern system of production based on demand can exist without it. Either mass poverty or forced labor and forced investment are the historic alternatives.

The only alternative I can see is for the gov't to take over the entire insurance industry. This would be essentially a system of Social Security for companies.

Not the answer you're looking for? Browse other questions tagged money-supply banking or ask your own question.

2
Why do we need base money at all?