This question is driving me nuts.

Now suppose that there are N agents in the above two period economy. The agents are identical (in terms of production and utility function) except that they have different discount factors. Suppose that β follows uniform distribution in the interval [ 1/2, 1]. Assuming r ≤ 1, what would be the demand function for rice in period 1?

Due to the linearity of the utility function the utility maximization problem for individual $i$ has either one of the two corner solutions, or it is indeterminate.

The individual $i$ has to solve the following problem

One can deduce that

.."steeper" and "flatter" with respect to the utility (linear) indiference map, and with $x_{2i}$ in the vertical axis. 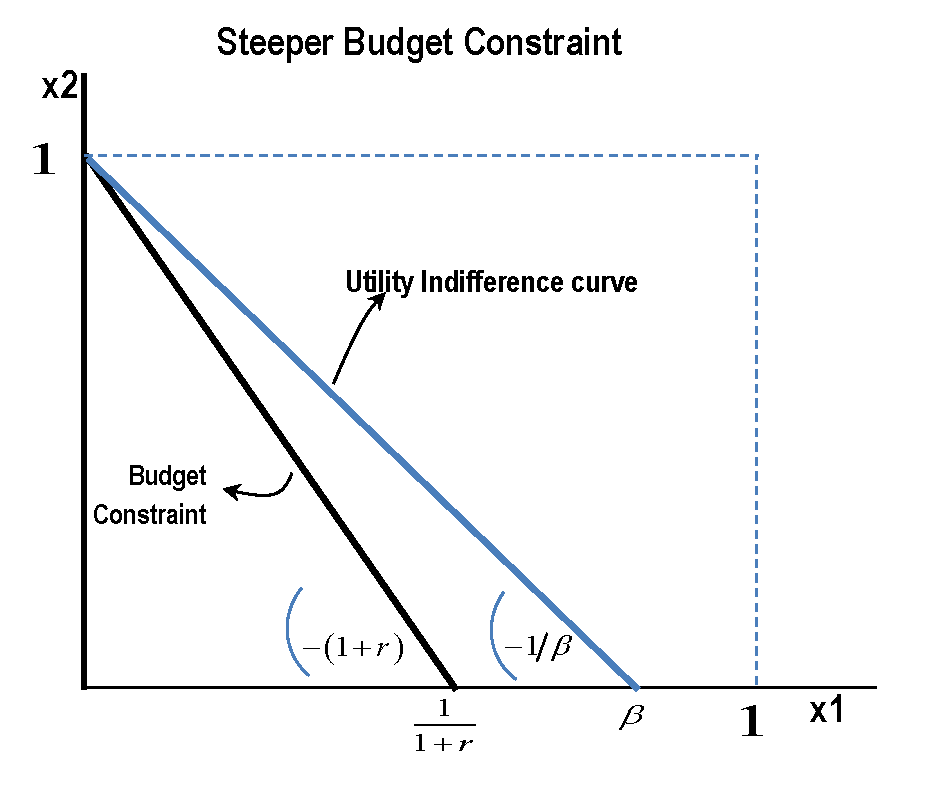 Working the implied inequalities we re-write the solution as

and so we have

which is decreasing in $r$.

If $r$ hits unity, expected demand will be zero -because
a) It would place a solvency ceiling to loan demand to be not higher than $1/2$ so that with interest rate $100\%$ all production of the second period would then be needed to repay the loans. This means that with $r=1$, maximum consumption (and utility) in the first period will not exceed $1/2$.
b) the discount factor being greater or equal than $1/2$, implies that by taking zero loan in the first period, one would enjoy the full unitary production of the second period, with utility higher than $1/2$. So for non-zero demand for loans in the first period, it must be the case that this demand can exceed $1/2$. When $r\geq 1$ it cannot, hence the zero expected demand.

Note: if instead of a "stochastic distribution" of the $\beta$'s we think of a "uniform allocation" of them in the $[1/2,1]$ interval, then we can think of expected demand as deterministic demand.