I'm a bit perplexed that eBay has auctions that have a fixed time ending, and so winners are often determined by who can 'snipe' the auction, by putting in the winning bid at the last possible microsecond.

Often specialised software is used to achieve this.

An alternative system, like New Zealand's Trade Me auction site uses, is that the auction is auto-extended by two minutes, if a bid is put within the last two minutes of the auction.

What this means in practise (from what I've seen in auctions I've particpated in) is that an auction might be extended by 10-30 minutes due to 'last minute' bids between two or more bidders.

Now, it should be noted that the auto-extending dynamic doesn't completely negate the sniping dynamic. For example if Bob sees that Alice has put a bid on a item for \$1000, which is due to close in two days, and Bob is willing to spend \$2000 on that item, it still makes sense for Bob to hold off bidding on the auction until closing time. Alice may not be paying attention\be at her computer (though trade me allows auto-bids) at closing time, and by bidding at the last minute, he reduces the window in which she can outbid him.

This auto-extending system seems like it evaluates the market value more genuinely than the sniping system.

Ebay is surely aware of this dynamic, and it must be a conscious decision to keep the sniping-allowed system.

My hypothesis is that systems that allow sniping encourage higher selling prices, as bidders pre-emptively increase their bids as to stay out of the sniper's willing-to-bid range.

Firstly, it's right to say that the hard ending rule on ebay seems to be behind sniping. Here's a figure from Roth & Ockenfels' AER paper: 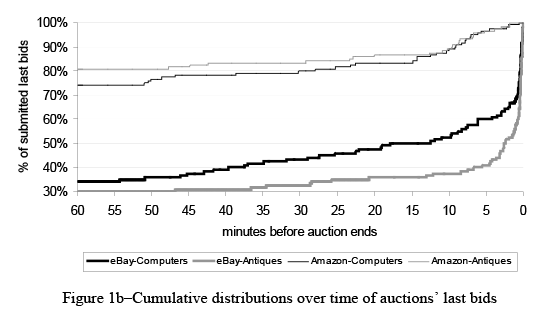 On eBay (fixed end time) bids arrive much later than on the now defunct Amazon auction platform (which used an extendable end time).

One explanation (see here and here) for this is that people want to hide their private information. If you think that you discovered a 'hidden gem' then the last thing you want to do is start bidding and let everyone else know that it's valuable! Note, from the figure, that sniping seems to be more acute in antiques auctions, where private information is likely to be more important.

The other leading explanation is that some bidders do not understand that they can use the automatic proxy system to take care of the bidding, and 'naively' sit incrementing their bid manually. Sniping is then a way to take advantage of such bidders' poor reaction speed. An experiment by Ely & Hossain that appeared in AEJ Micro verified that sniping indeed gives you an advantage over such naive bidders. This marketing Science paper by Zeithammer and Adams also provides evidence that manual incremental bidding is common and that it is therefore wrong to think of eBay as a simple implementation of a second price auction.

So, two perspectives on what is going on here: concealment of private information and exploitation of naive bidders. Both of these have one thing in common: they imply that Sniping leads to lower prices, not higher.

So why does eBay persist in the use of such a mechanism? Only they know. But here is what I suspect:

eBay is a two-sided market. It must attract both sellers and buyers. Usually, optimal pricing in a two-sided market involves subsidizing one side of the market to get them onto the platform before milking the other side. But buyers already pay $0 to eBay; what if a bigger subsidy is needed? One way to implicitly subsidize buyers and attract them to the platform is to choose a mechanism that results in a lower selling price. In the end, if the result is indeed to attract more bidders, this might not even be that bad for eBay. Bulow and Klemperer have shown that adding bidders to an auction is almost always more profitable for the seller than redesigning the auction but keeping the number of bidders the same.

If bidder valuations are dependent on the information revealed by other bids (particularly increasing in their number and level), then we would expect too low bids because bidders have to internalize the effects of their bids on others and reduce them in response. Allowing sniping fixes this problem because last second bids don't give others an opportunity to profit from the new information.

Evidence demonstrating the influences of these unique features of online auctions on the prices consumers are willing to pay has shown that final winning prices are positively related to the total number of bids and to the total number of bidders (Ariely & Simonson, 2003). It has also been shown that bidders place too much value on information gathered within the particular auction in which they are participating, and are thus unduly influenced by that auction’s reserve price (Häubl & Popkowski-Leszczyc, 2001).

One explanation for sniping is that bidders might hold off bidding to the last moment in order to strategically hold back information until the last minute of the auction, to avoid price wars triggered by competition (Bajari & Hortacsu, 2003; Häubl & Popkowski-Leszczyc, 2004). This explanation for sniping emphasizes the sensitivity of online bidders to other bidders, as well as the competitive nature of online auctions.

AUCTION FEVER: THE EFFECT OF OPPONENTS AND QUASI-ENDOWMENT ON PRODUCT VALUATIONS

I believe (and eBay seems to agree with me) the system was designed to encourage proxy bidding. Proxy bidding is the best possible strategy for eBay.

Proxy bidding is a pretty simple system: you tell a tier (the proxy) the maximum price you're ready to pay for an item and send him to the auction. Hopefully he will get the item for less than the price. Every time the auction stalls at a lower price than your max bid, your proxy will increment the price by 5$ (or some other arbitrary amount).

Why eBay likes it

Because if 2 bidders are willing to pay more than $M$ for an item, eBay is sure to sell it for more than $M$ (the proxies beat each other to $M$). This kind of defeats any strategy from the bidder to get the item for less than $M$ except if he is the only one using a proxy.

Fixed time bidding allows snipers to defeat people at bids lower than their maximum bid. As a consequence, it makes any bid other than the maximum price you're ready to pay a risky bid: the item might go at a lower price than your max, to someone else than you. People don't like this, and so are more likely to bid higher.

Not the answer you're looking for? Browse other questions tagged auctions or ask your own question.