Does this cartoon about the transpacific partnership contain errors? [closed]

Discussion of the cartoon spawned a very argumentative thread on reddit, with as far as I can tell no hint of a consensus.

I'm specifically interested in whether the cartoon has any specific factual errors or economic misconceptions, and if so whether those mistakes are serious or not.

Small mistake #1: What capital is

The author identifies "bonds, real estate deeds, stock certificates" with "capital" (p. 5). But in mainstream economics, capital refers not to these, but to durable goods that can be used to produce other goods and services.

It may be argued that this is a mere quibble, since the author is communicating to a mass audience and in everyday parlance, that is what people think of as capital. Unfortunately, "capital" recurs throughout the comic and is, indeed, a key component of his arguments against free trade. He frequently conflates "capital" in the fuzzy, ill-defined layman sense and "capital" in the more precisely defined sense that is used in academic economics. 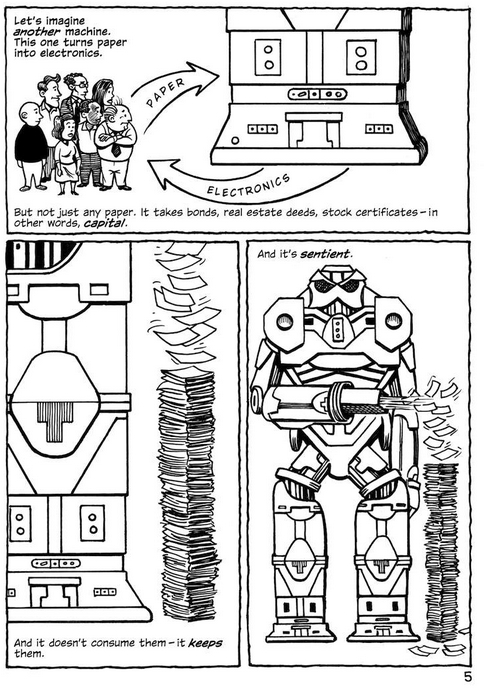 Then on p. 12, capital is depicted as businesses that are shipped off on boats from Iceland to Guatemala. 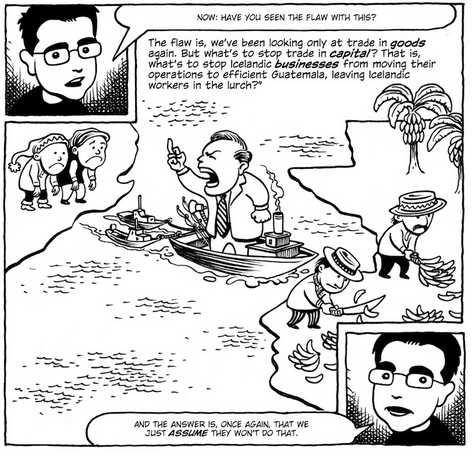 Then on p. 13, "stocks, bonds, and real estate" (which he defined earlier to be capital) are given to some Chinese-looking man on the left, who then gives back in turn $ \$ $ to the grouchy, jowly man in the middle, who then distributes this $ \$ $ either as savings or investment. Investment is depicted as some excavators constructing some buildings. The text below then claims, "People who 'buy capital' are investing their money." This is all terribly wrong and confusing: So what exactly is capital? Is it something that corresponds to the $ \$ $ symbol? Is it "stocks, bonds, and real estate"? Is it excavators or buildings? What is its relation to savings and investment?

As already said above, capital refers to durable goods used to produce other goods and services. Investment in turn refers simply to the purchase of capital. 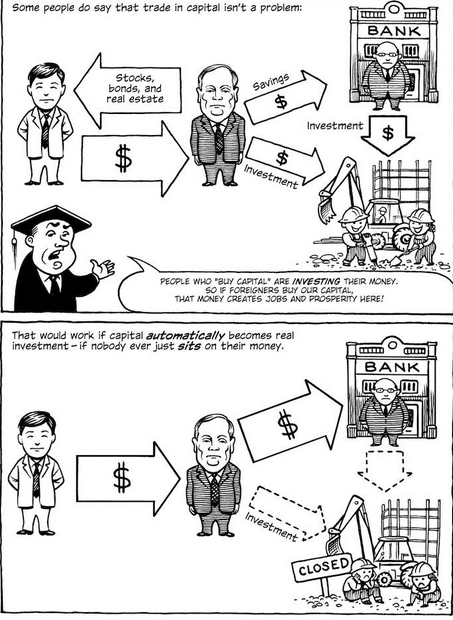 On p. 21, capital is depicted instead as boxes being shipped off on a boat by some corporate fat-cat displaying his middle finger. It is unclear what is in the boxes (pieces of paper? excavators? office buildings?).

P.S. I am not an expert on trade. This small mistake is merely one I managed to spot. In my opinion there are many more mistakes. But this post is long enough, so I hope someone who is an expert on trade will find it her duty to explain the other mistakes, especially since this comic has for some reason received undeserved attention.

Not the answer you're looking for? Browse other questions tagged free-trade or ask your own question.

3
What are some real-world examples of the different types of trading blocs?
6
Economic consequences of a lingua franca
2
Is the Trans Pacific Partnership good or bad for the U.S?
3
Have there been any attempts to turn free-trade agreements into Pareto improvements?
3
What exactly is the argument for Free Trade?
1
According to the U.S., what constitutes as fair subsidies?
3
Does free capital mobility invalidate the basic comparative advantage argument for free trade in goods?