How could Greece-related worries drive US stocks down about 2% in a day?

Major US stock indices are down ~2% on Jun 29, and it's mostly associated with investor's worries related to the Greece crisis.

I understand about possible "chain reaction" and that a lot of companies may be exposed indirectly to Greece debt.

But given that, it seems silly that investors think that because of this average US companies lose 2% in values. I mean, Greece is relatively a small country and it doesn't have a very close link to the US economy (unlike, say, Canada). Even if all Greek government and banking bonds evaporate, the impact of all those would still be way less than 2% of an average US company, right? 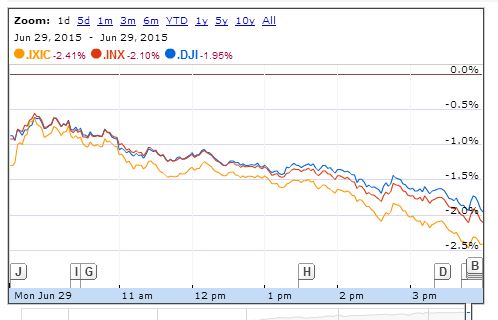 Because Greece sets a precedent for Italy, Spain and Portugal (and others).
And a default of Italy (and Greece) will cause financial difficulties in France. 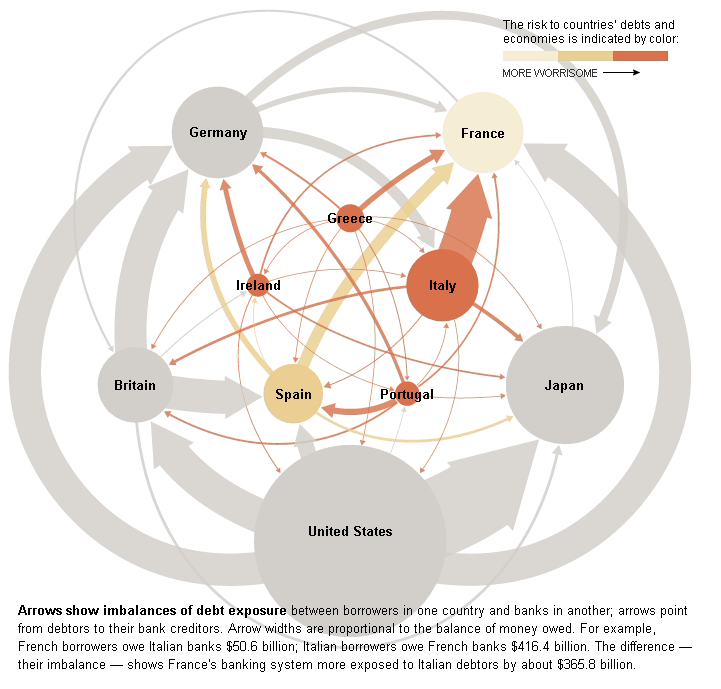 If the interest rates for Italy and Portugal rise (they do now), then those countries are even more unlikely to repay their debt. And meanwhile, somebody has to write them off.

Greece in itselfs really is kind of unimportant (except for France). That the debt really cannot be repaid is at this point kinda obvious to everyone. And while a write-off of 80*109 € (or part thereof) is painful for Germany (and others), it's simply not the size that can seriously jeopardize an economy of 8 times the polulation and 15 times the GDP of Greece. The risks of political fallout in Germany are another story (and the problem of Merkel).

Greece mainly is kind of an experimental laboratory of things to come (Syriza in Greece = Podemos in Spain, Italy => ? ...)
And the experiment seems to spell disaster.
Meanwhile, nobody likes to be the labrat.

As always, the stock-exchange is the place where the expectations of the future generate the prices of today (together with the panic of the moment).

A 'chain-reaction', as you describe it, seems like a very plausible possibility at the moment. As strange as it may sound, there is actually quite a lot of panic in the streets of Athens right now. Not only is it unclear where Greece is heading, but there are possibilities as far-out as the current government getting dissolved.

Let there be no doubt that it will have far-reaching consequences. The Eurozone is currently giving Greece a serious side-eye. No one is quite sure about the extent to which Greece's exit could hurt them.

What this, in turn, means is that the European economy could come to a grinding standstill. There is no saying how far the Eurozone could go to protect their currency. They already have a watchful eye on the stock markets and within the first sight of a looming disaster, they could shut down all trade and try their level-best to ensure that no money leaves the Eurozone. This could mean temporary trade barriers and a big no-no to business outsourcing.

I firmly believe that the Euro is resilient enough to stabilise itself again in due time. However, most investors would prefer to sit on their money until then.

There are, of course, other factors involved as well. Greece could, for instance, increase import tariffs and do away with its liberal policies until the local economy is strengthened and can stand on its feet.

Not the answer you're looking for? Browse other questions tagged finance or ask your own question.

5
Why US market is falling due to greece fear?

0
How to handle the missing values' issue of newly listed stocks?