Can banks maintain Euro accounts if the country they're in leaves the eurozone?

If a country forcibly leaves the Eurozone, is it possible for banks within this country to maintain existing euro deposits? Or does leaving the eurozone mean those deposits are automatically converted?

Arguably the problem all along with the Eurozone (and any other currency union) is the operational mechanics of the underlying banking system.

From a systems perspective, banking systems statistically multiplex liability bank deposits against asset cash and electronic equivalents. (It is mostly electronic these days.) Broadly speaking, the main function of the asset money is to provide an interchange mechanism between banks, and the deposit money is what is actually used to perform economic transactions.

There is no way of enforcing what physical currency gets used as the interchange mechanism. It doesn't really even need to be a recognised currency, and several precious metals have been used in the past. However, if a banking system uses a physical currency whose quantity is outside of its control - i.e. the money is printed by somebody else, then the banking system will collapse over time, unless there is net flow of the currency into the system. 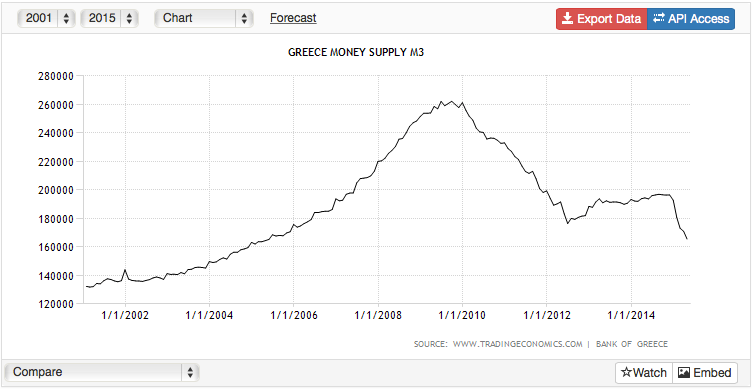 Now, if we look at the greek money supply figures, and we know that that there are essentially three ways for liability deposits to decrease as shown - loan repayment, loan write-off and cash withdrawals, we can deduce pretty easily that Greece is experiencing a massive outflow of cash. We can assume that some of it is cash withdrawals particularly recently, but some of it also debt repayment to debt owners outside of the Greek banking system. As a very rough rule of thumb, on a 25 year loan, about twice as much money will have to flow back to the lender, as was originally borrowed, and this is what's causing the underlying systemic problems.

According to the Wall Street Journal, this is a summary of the debt picture:

Mechanically speaking then, the only way a country can unilaterally stay in the Eurozone is if they are experiencing a net inflow of asset cash/money, in which case it's unlikely that they'd be under pressure to leave it. What this counter-situation does to the economy depends very much on how the banking system is regulated, and since most countries no longer depend on asset cash/aka reserve regulation as a control, the answer as also seen in the US with TARP is not necessarily very much.

A water analogy may be slightly helpful. As long as there is enough water, and any excess can be stored, then it doesn't matter if over time more water comes in than can be used. However, it's disastrous to not have enough water - and that's essentially the problem that the banking system is currently causing for Greece. The various attempts to "solve" the problem by issuing more debt, simply act to make it worse over time.

there is no treaty provision at present for a Member State to be expelled from the EU or EMU (http://www.ecb.europa.eu/pub/pdf/scplps/ecblwp10.pdf)

Now could such a provision be added?

Moreover, apart from it being politically almost inconceivable, forcing a Member State out of the EU or EMU would inevitably give rise to tremendous legal complexities. ... ‘participation in the European Union gives rise to a wide web of rights and obligations to citizens, companies and governments. To erase all those obligations at a stroke by expelling the member state would create huge confusion and penalise ordinary citizens and ordinary businesses, who rely on their rights of residence and free movement, to name but two’

Not the answer you're looking for? Browse other questions tagged monetary-policy currency central-banking euro-area or ask your own question.

4
Where did the Greek cash go?

16
Should Finland leave the eurozone?
4
Currency substitution after withdrawal from a currency union?
5
How would Greece "temporarily" leave the Eurozone?
3
Can small countries use a foreign currency as their official currency?
2
Do banks make profits by selling bonds to the central bank?
3
Where does the extra money come from when a new country joins the Euro and converts its currency?
2
Why would a common currency such as the Euro that can't be devalued be incentive for banks to lend money to a country?
1
Is it theoretically possible for a singular national currency to exist under a free banking system?
1
What are the advantages of using euro for Greece?